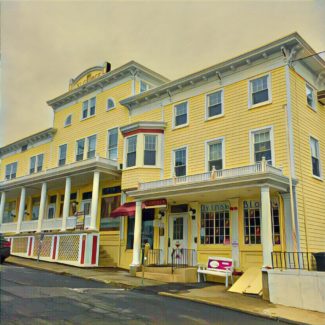 St. George as it appears today. The section on the right was once the restaurant.

Finding the right wine to serve with Thanksgiving turkey is a perennial challenge. But in 1919, it was easy. New York State had gotten a jump start on prohibition, going dry on October 28. Despite the lack of merriment attributed to spirits, Thanksgiving 1919 was the first heart-felt holiday since Nyack men had fought and died in World War I and the Spanish Flu ravaged Nyack and the world. Costs were high, so some served chicken rather than turkey. Mince and pumpkin pie tasted different due to a sugar shortage.

Prohibition started with passage of the Wartime Prohibition Act on November 18, 1918, which banned alcohol content greater than 1.28%. The act was intended to save grain for the war effort, however, it wasn’t passed until after the end of the war. The act ended on June 30, 1919. The 18th amendment was passed on January 16, 1919, banning alcohol with an effective date of January 17, 1920. The Volstead Act was passed over Wilson’s veto on October 28. The act supplied the legal definition of intoxicating liquors and penalties for distribution. The next day, Rockland County went dry.

Thanksgiving at the St. George Hotel

The restaurant at the St. George Hotel was the top dining spot in the village. It held a monstrous Thanksgiving feast for a guest list that included diners from Chicago, Providence, London, New York, Cleveland, as well as many from the village and surrounding areas.

It was standing room only at the 700-seat Broadway Theater at the corner of Broadway and Church street for three performances at 3:15p, 7, and 9 on Thanksgiving Day. Fatty Arbuckle and Buster Keaton appeared as two vaudeville actors in the 1919 silent comedy, Back Stage. Typical of the time, the movie was short, at 29 minutes. Live music accompanied the film as well as the six vaudeville acts.

Sports and music at the YMCA on Main Street 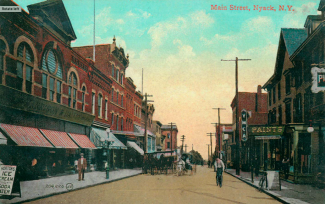 Postcard looking west down Main Street. On the right, the vertical sign for the YMCA is visible. Courtesy: the Nyack Library

The YMCA was located on Main Street in 1919 and was the home of a bowling alley. A bowling match was rolled during the afternoon. Evening entertainment was provided for members and contributors. The New York City Brass Quartet had been engaged to perform at the Y but the death of a sister of a musician caused a cancellation. However, the show went on with local musicians including Miss Enid Alexander on the violin, Miss Mable Burt on the piano, and Eugene Lockhart providing amusing performances for a packed audience.

A morning football game was held at the ball field on Midland Ave., across from Nyack hospital. The Thanksgiving team featured many of the village notables. The teams were captained by two sons of well-known villagers. The All-stars were captained by Leonard Frost, and the Nicotines by Arthur Tompkins Jr., the son of New York Supreme Court judge Arthur S. Tompkins.

Then as now, politics was at the forefront. Coal strikes and the vote against President Wilson’s plan for a League of Nations were topics of the day. All was set aside, however, for a moment of calm, as villagers enjoyed a fun Thanksgiving without war and wine.