There’s early voting this weekend from 9a-2p  for Election Day on Tuesday, Nov 5. Visit the Rockland County Board of Elections to learn where and when to vote. 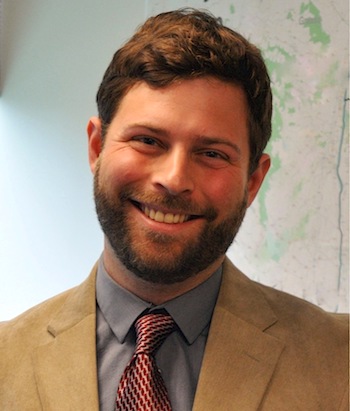 In January 2018, after a spirited primary and general election, I was sworn in for the start of my first full term as one of your village trustees. Village trustees play a key role in Nyack’s government. Along with the Mayor, we are charged with passing local laws and ordinances, managing village property such as Memorial Park, hiring the employees who deliver village services such as the DPW, and approving the annual village budget. Working with my colleagues on the Village Board, we’ve made progress on many issues over the past two years—from infrastructure, to affordable housing, to parking—but I believe there is still much more work to be done. That’s why I’m asking you for your support on November 5 to continue my work as one of your village trustees for two more years.

I grew up in Nyack, graduated from Nyack High School and Cornell University, and received a masters degree in city and regional planning from Rutgers University. Over the past decade, I held several roles in local government offices, including for Congresswoman Nita Lowey, our former Congressman Eliot Engel, and our former Town Supervisor Andy Stewart. I spent three years working as a senior research planner at Hudson Valley Pattern for Progress, a non-profit regional planning and policy organization dedicated to improving communities throughout the Hudson Valley. In January of this year I began working as the Legislative Director for State Senator James Skoufis, who represents north Rockland and much of Orange County.

Two years ago, I ran for the Village Board because I was determined to use my experience and skills to protect and preserve the community I grew up in from threats to our quality of life and was committed to working tirelessly to make our wonderful village an even better place to live. Since taking office I have worked to deliver on that promise. Among the issues I’ve focused on are:

There are so many other critical issues, from infrastructure to sustainability, from recreation and improvements in Memorial Park, to increased transparency and better communication with residents. All of these, and more, are areas I will continue focusing on if I have the honor of being elected to a second full term. You can learn more about my priorities at my website: www.elijahnyacktrustee.com

With your support, I want to continue this record of progress and keep Nyack a vibrant, thriving, and affordable place to live, and a welcoming place for the small businesses that fill our downtown.