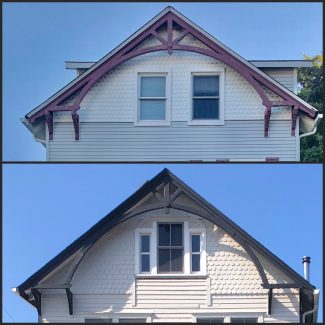 Twins? Sisters? Cousins? Two three-story commercial buildings located in Upper Nyack and Nyack nearly one mile apart and built some 135 years ago using the same pattern by the same builder are related. The private residence at the corner of N. Broadway and School Street in Upper Nyack is often called the “Seven A.M.” house and is recognized to be the model for the eponymous 1948 Hopper painting. Its twin building, the El Cunao Taqueria & Deli at the southwest corner of Midland and Main St., hides its old first floor front behind a false one that was added some time in the 20th century.

Both structures were built around the same time by John W. Pitt, a carpenter who lived across the street from the “Seven A.M.” house. The exact similarities between the buildings may not be noticeable at first glance other than that they’re both wood three-story buildings. The private residence is slightly narrower and longer than El Cunao Taqueria.

But on closer examination, similarities emerge. Both building fronts sport scalloped third floor shingles. Beneath the eaves of both is a carpenter gothic style decoration of unusual design. With so many building changes over time, it is amazing that these simple decorative elements have survived. 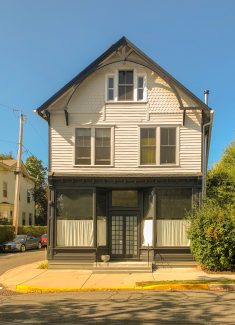 Private residence on N. Broadway at the corner with School Street

The private residence at 318 N. Broadway is featured on the Edward Hopper House and Museum’s walking tour, Edward Hopper’s Nyack. Hopper was born in 1882 and remained in Nyack until the early 20th century, returning to visit his sister who remained in his birth house. The painting is not a direct copy of the building but is reminiscent of its architectural details. The strong light in the painting is characteristic of morning light in Nyack that shines directly on the building. It is uncanny for those who know the painting to observe the building. 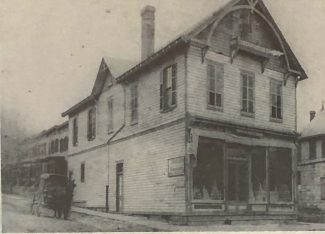 Early view of general store and post office circa 1890. From Centennial Village of Upper Nyack

The building dates back to the 1880s. It was built by James Voris, who was the owner of the shipyard at the foot of Castle Heights Ave, and built more sailing vessels than any other builder along the river. It was originally a general store with two floors of goods, which also served as a post office. The store didn’t thrive and the use of the building has changed over time: it has housed Ben Franklin Bookshop and Printery, an artist gallery, and a bookseller. It has been a private residence for most of this century. The building itself has hardly changed during all these years though. A side door and a decorative mantle beneath the third-floor window has been removed; that’s about it. 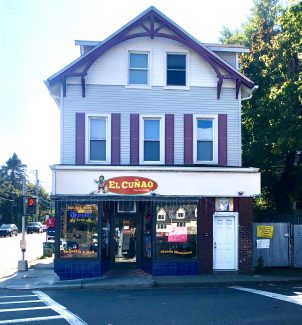 Located at 233 Main Street, the El Cunao building bears the signature of carpenter Pitt. Slightly wider and not as long as “Seven A.M.”, it sports the same patterned molding under its front eaves, along with a gable in the middle of each side. Since the building is slightly wider, the front has two windows. It is unclear exactly when the addition was made to the front.

1941 parade passing in front of what was then a pharmacy at 233 Main St. Courtesy of the Nyack Library.

The early history of the building is uncertain. There is a Klein Bros. grocery store in 1910 ad. Later, the building was known to be Neustadt Pharmacy, and in 1941 R & Sons pharmacy. The Reliable Meat Market, once at 226 Main, moved across the street into 233 Main, remaining there into the 21st century, evolving into the Reliable Meat Market Deli and Pizzeria. In 2017, El Cunao Taqueria opened. The building has changed over time with the addition of a first-floor front that pushes out two feet from the building. Modern dormers have been added to the third floor along with shutters on the second-floor windows.

Much of Nyack commercial space was built in brick during the time the “Twins” were built. Both buildings were probably designed by the carpenter to fit the space available using a common architectural pattern. The gable molding is unique. It is indeed possible that the young Edward Hopper walked past both buildings as a young man, imprinting the detailed scene he paints nearly 50 years later in Seven A.M. 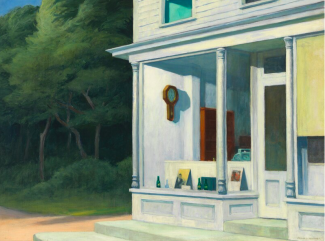