Picture postcards served as the text messages and Snapchats of their pre-digital time. Thousands of different images appeared–and still do–on postcards, from natural wonders to scenes from everyday life. Nyack offered a wide range of postcard subjects. One image that’s recurred over time is the view of Main Street from its intersection with Broadway. Arranging the images from the 1890s to the 1950s shows Nyack, an iconic American village, undergoing profound and rapid change.

Postcards were invented by the British and French, with the first picture postcard made around 1870.  Most printing was done in Germany before WWI because of the Germans’ expertise in chromolithographic printing, especially after colorized images became a postcard standard. The golden age of American postcards occurred just before World War I and continued into the “white border” era of 1916-1930. The use of the word “postcard “was restricted by the US Government at first to government-prepared cards, until 1901. Writing was allowed only on the image side until 1907, when senders could write on the address side. Printing from color photographs became the standard around 1939, using paper with a glossy coat on the image side. 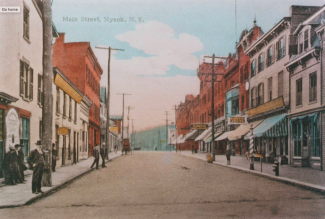 Colorized postcard of a photo of approximately 1890, taken looking west on Main St. near the corner with Broadway. The street is curiously empty of any traffic. On the right side, two signs can be made out for Fabbrini Fruits and Schmitt’s candy and ice cream. On the left, at the corner of Main and Broadway, is Venekamp’s Cigar Store. Courtesy of the Nyack Library. 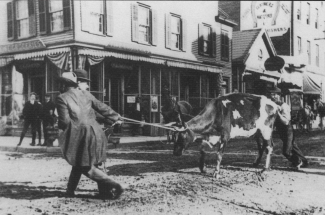 This photo of a recalcitrant cow at the unpaved intersection of Main St. & Broadway dates to around 1895. The photo is taken from the intersection of Main and Broadway, looking to the northwest. Orlando Humphrey’s three-story wood building housing a grocery store on the first floor is on the corner. Courtesy of the Nyack Library. 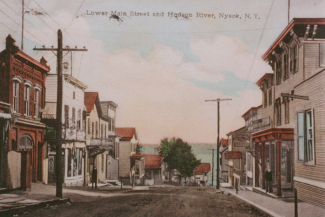 Postcard with a scene from 1895, looking east from the intersection of Main and Broadway. The Mazeppa fire station and the building now housing OD’s Tavern are clearly shown on the left. One of the first buildings on the right now houses the Nyack Barber Shop. Courtesy of the Nyack Library. 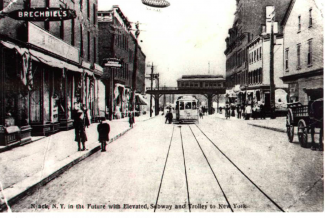 This fanciful postcard of Nyack, made during the time when a trolley line nearly appeared in Nyack, is a view looking down Broadway. Main Street crosses just behind Orlando Humphrey’s three-story wooden building on the northwest corner. Opposite it on the southwest corner is Venekamp’s cigar store, a building that would soon be demolished. Courtesy of the Nyack Library.

Taken from the intersection of Main & Broadway looking west, this postcard from around 1905 shows the first appearance of an automobile sharing the street with several carriages. Note the narrow sidewalks on the southern side and wider sidewalks on the northern side. Many stores on the sunny-side of the street sport red-striped awnings. The man in the red-striped apron is presumably the grocer from the store behind him on the northwest corner. Courtesy of the Nyack Library. 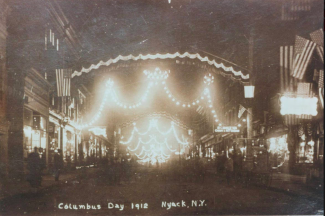 Rare night picture postcard with a photo taken by Nyack photographer Norman Burke showing the lighting for the 1912 Columbus Day parade. Lit signs for Fabbrini Fruits and Schmitt’s Canid and Ice Cream can be seen on the right. 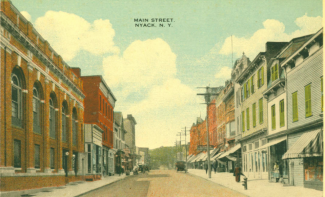 Postcard shows a scene with the Rockland Trust Building at the southwest corner of Main and Broadway for the first time. The bank opened in 1906 and remained there until 1932. The other corner building now houses the Nyack Shoe Shine Parlor. Courtesy of the Nyack Library. 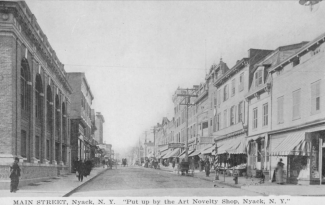 Postcard shows a black and white scene from around 1910 looking west on Main Street from Broadway a little further back than the previous postcard. The Rockland County Trust building and the Nyack Shoe Shine Parlor are on the two corners. A sign for Schmitt’s ice cream parlor can be seen on the right. Courtesy of the Nyack Library. 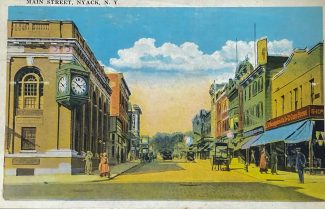 In this postcard from the 1920s, a new building on the northwest corner of the intersection is shown. In 1919, a brick building opened replacing  Humphrey’s old wooden building. The occupant was Woolworths Co. 5-10 Cent Store. The building is now occupied by Turiello’s Pizza. A large clock that once adorned a bank in Union Square in New York City is shown on the corner of the Rockland County Trust building. Carriages still appear on the street even at this late date. Courtesy of the Nyack Library. 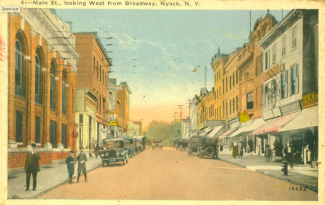 In this postcard, dated slightly later than the previous one, the F.W. Woolworth store can just be made out on the far right. The three-story wooden structure next to it is one of the last remaining large wooden buildings in the block. The building was later removed. Parked cars have become more numerous. 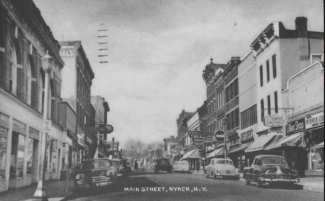 Main Street has changed considerably in this 1954 postcard. Parked cars  line the streets, power poles have disappeared, and new streetlights are in place. Storefronts have been greatly altered from the original buildings over the last 20 years. The Rockland Country Trust Co. was absorbed into the Nyack National Bank in 1932, and the bank became a site for offices and stores. A wooden front was added to the first floor to create stores. The clock was removed at the same time. A variation of the wooden front still stands today. The three-story wooden structure on the north (right foreground) side has been replaced by a single floor building housing the Pickwick Library and Lillian Shop (corsets). The building now houses Starbucks. Neisner’s, a clothing store, sports a plain mid-century front over the old brick building. The building on the northeast corner is not shown here, but Woolworth’s has moved further up the street. Courtesy of the Nyack Library.