Long time Upper Nyack (Goosetown) residents Joe and Cathy Heider and their three girls have completely brightened the corner of Broadway and School St. by removing brown house shingles and adding dreamy three-tone paint to their Victorian home that lights up during a Hudson River sunrise. Renovating a 1884 Victorian that had been converted earlier into a multi-family building was not a small job. The Heiders have patiently changed one thing after another inside and outside the house. Now, the final step, the icing on the cake and a delight for all who pass by, is an eye-catching reveal with a new coat of paint. 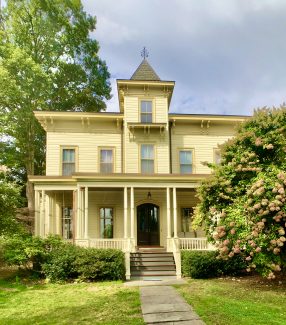 The Heiders have a chance to consider the lengthy history of their home, especially when they get to see the different river town’s 4th of July fireworks from their third-floor belvedere window. As Joe Heider puts it, “We view ourselves as stewards of the house, remaining true to its original intent while at the same time modernizing it.”

The Heider house dates to around 1884, according to village historian Win Perry who has written and spoken extensively about the historic Van Houten Landing neighborhood. The “village center” was just taking shape, with new shops and a school near the intersection of Broadway and Castle Heights, as the village expanded beyond the neighboring streets surrounding the old boatyard at the foot of Lower Castle Heights east of Broadway. 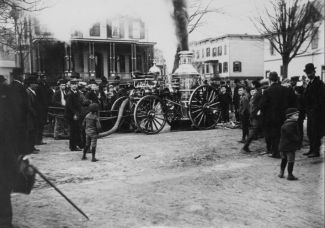 The Heider house is shown behind the brand new Empire Hook & Ladder stem fire engine. To the right are the houses of School  Street and the general store. Photo is from about 1895. Courtesy of the Nyack Library.

The Heider house was built by James Voris, who was the owner of the old Van Houten shipyard, known to us today as Peterson’s boatyard and now owned by North River Shipyards. Voris was known to have built more sailing vessels than any other builder along the Hudson River, including a number of extremely fast yachts. His ship Minnie won the 1857 great race around Long Island. He was popular with owners of woodlands since he purchased nearly all his timber locally

To house shipyard workers, Voris built nine row houses on School Street in a style similar to the row houses on Bridge Street in downtown Nyack that were built about the same time. It was a mini-company town. Workers would collect their pay and then return the money to Voris for rent and food at the next-door Voris-owned general store.

School street was not a through street since it ended at the entrance to Upper Nyack School that also opened around the same time as the Heider house. The schoolyard and a ball field abutted the rear of the Heider house.

The mystery of the butcher shop

It’s a little hard to imagine now, but Win Perry thinks there was once a butcher shop in front of the Heider house. He notes a 13-foot foundation near the front sidewalk and the fact that an early map shows a building labeled “Butcher Shop.”  Supporting that argument is that when the Heiders first moved in there was a 13’ square shed attached to the carriage house behind the Heider house. In it, they found meat hooks and the word “ice” above a window. An 1895 photo of the house front does not show a butcher shop. Perhaps the butcher shop was moved behind the house by Voorhis shortly after the house was built. 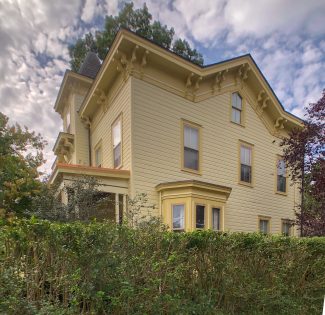 Side view of the Heider House from School Street

Italianate-style became popular in American homes built in the mid- and late-19th century. Architect Alexander J. Davis is credited with inventing the style as he objected to the bald and uninteresting facades of American homes. The style is characterized by strong eaves supported by corbels, a low-pitched roof often not visible from the street, and a tower or belvedere.

Architects sometimes use the term “Hudson River Bracket” style to define the use of corbels as decorative elements. The Heider House is a fine example of all these elements with rows of double brackets supporting the eaves along with a decorative shelf beneath the tower window. The double-bracket element is picked up again through the use of thin twin porch supports. The house is symmetrical with matching bay windows on each side.

From a home with an apartment to something modern

Heider, originally from Minnesota, bought the house in 1993 from long-time owners, the Propers, shortly after moving to Nyack from Fort Lee, NJ.  Almost everything in the house required work. Heider started with the basement, digging out the dirt basement floor, removing original coal bins, and adding a concrete floor. 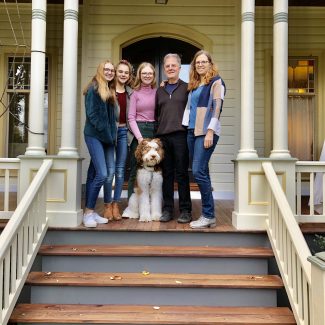 The Heider family with Ellliot

The Heiders were married on September 18, 1999, just two days after Hurricane Floyd, whose heavy rains damaged much of Nyack. A beautiful calm followed the storm and friends and family were able to make the wedding. Cathy remembers her initial excitement about Nyack when Joe drove her down tree- and Victorian-lined 6th Ave. The couple never looked back.

Over the years, they’d renovate the home room-by-room. Rug-covered floors turned out to be unfinished subfloors with holes covered by the bottoms of tin cans. Shellac-coated moldings were returned to pristine with parental help. New electrical systems and roofs were installed. The upstairs kitchen was converted into a master bedroom. The kitchen was expanded and a back porch added. What had been a dark interior became filled with light, especially through the tall first-floor windows. The third floor with the belvedere window facing the Hudson River was completely redone.

The aging carriage house and shed rotted out and was replaced by a modern garage opening onto School Street that was designed (by Win Perry) to match the style of the original. Flowers and shrubs were added with the advice of long-term neighbor and master gardener Miriam Wexler, whose yard was a showcase on the Nyack Garden Club tour for many years. A wide array of spring flowers along the slope next to the sidewalk brighten the street beneath a weeping cherry tree. Several large hydrangeas frame the front porch.

Not a painted lady, just delicious

The last step, and the most visible in the renovation of the Heider house, was reworking the exterior, which contained its own surprises. The brown cedar shingles needed to be replaced. While looking at what needed replacing, they received advice that the clapboards underneath were in fine shape. They made the decision to remove the shingles and return the house to its original skin. 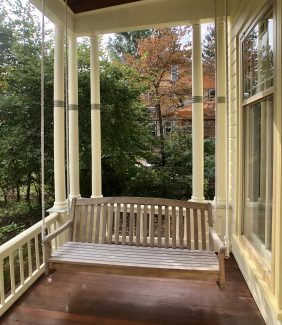 How to decide on the new colors? Joe was all for accenting the many architectural details. Cathy was looking for something a little less flashy, not a San Francisco Painted Lady effect. For inspiration, Cathy went to the Garfield Place neighborhood in Poughkeepsie and found the perfect model. Reviewing swatches of historic colors, they settled on what is called green-mount silk, which I think you will agree is cream with just a tinge of green. They then decided on the trim and accent colors. A pastel green accent color is picked up again on the new garage.

The Heiders are exemplar Nyack villagers. Restoring a home and raising three daughters brings vitality to our village, to say nothing of creating an Instagram-ready street presence. As Cathy says, “Nyack is the perfect place to live. We know our neighbors, people walk around the neighborhood, we can walk to the downtown, and nature and the city are nearby.”