Nyack, Oct 16 — Over 30 candidates for public office in Rockland County, Clarkstown, Orangetown, and Nyack outlined their vision for the future of our communities at the NAACP Candidates Forum at the Nyack Center on Oct 16.

Opioid abuse, sustainability, environmental protection, economic development, infrastructure, education opportunities for all, commuting, and transit issues were discussed. However, two key issues were mentioned by a majority of the candidates.

The Nyack Center was double booked on Candidates Night

By coincidence, a “triple play” occurred right in the middle of the Major League Baseball league championship series last week. But this had nothing to do with the national past time.

The Nyack Center was doubled booked on Wed night 10/16, for the NAACP Candidate’s Forum which happened to coincide with Rivertown Film’s screening of The Biggest Little Farm, at the same time that a vicious ‘noreaster was wrecking havoc and holding down attendance.

The Biggest Little Farm chronicles the life of a couple who decided to build a farm that exists in harmony with the nature around it. They not only succeed but also come to a much greater understanding of themselves, their quest and how everything coexists with the intricacies of nature and life itself.

We probably should have just watched the movie.

Instead, the candidates forum took place in the rear meeting room, and folks still damp from the rain crowded together in the stuffy warmth, eager to hear from the women and men looking to lead our municipalities in their various roles. — Ken Sharp

Ramapo was also a well used keyword throughout the evening. To their credit, some candidates refused to use the word to fearmonger. However, others were more than happy to cite the town name as a warning or what the future might bring. One candidate mentioned being “on the front lines of Ramapo” during the early 2000’s, another warned, “What happens in Ramapo does not stay in Ramapo,” and yet another cautioned the audience that they must not “look away from evil,” nor be “beholden to the bloc.”

The frustration and fear of these candidates was obvious and, to some extent, understandable – but when people speak as though the only problem with Rockland County is a particular subset of a certain group living in one town, the scapegoating and demonizing distracts from bigger issues. Would all of Rockland’s woes completely disappear if any segment of its population no longer lived here?

Would any of these issues suddenly improve simply because any sector of our population wasn’t here? Would we stop the deaths of one person a week from opioid overdoses? Would we magically have light rail transit options to Manhattan so our property values could be at the same level as Westchester’s? Would we suddenly increase our use of sustainable energy to lessen our dependence on fossil fuels and help to heal the planet?

Of course not. Our problems are greater than the effects of any one group, and our solutions will have to be greater than anyone’s need to maintain the status quo, or to sow divisiveness and make all the county’s issues into an us vs. them scenario. ?“Every kingdom divided against itself is brought to desolation, and every city or house divided against itself will not stand.”

Candidate Quotes at The Nyack Center

“Who here has been to a recent county legislative meeting? The word ‘circus’ is what came to my mind. What I witnessed was a grouping of disassociated public officials who are not having cohesiveness to enable them to do the good works that need to be done in Rockland County. If people don’t respect each other and work as a team, progress can’t be made.” — Laura Rose, RC Legislature District 5 candidate

“I sincerely believe that we’re under threat, I believe we’re under threat from Ramapo – that that chaos is going to infiltrate and take over and basically destroy what we have here. I’ve been knocking on about a thousand doors so far – I met a lot of people that fled Ramapo for Orangetown, I haven’t met anyone that said they’re going there.” — James Foley RC Legislature District 17 candidate

“I want to kind of humanize myself. A lot of you guys know me from my online behavior, but that’s like a persona – that’s not really me. I’m actually a person who’s a lot more calm.” — James Foley, RC Legislature District 17 candidate

“I live in Ramapo, no plans to flee; in fact, we’re getting solar panels on the house next week….and when you get those you have to stay.” — Julie Goldberg, RC Legislature District 15 candidate

“I’ve got ten lawsuits against me as a part time mayor having served two terms and one term as trustee. Why? Because I stood up for the rule of law and what is right. Nobody else can say that.” — Brett Yagel, RC Legislature District 2 candidate

“When we look away at evil, there’s a problem. It grows. When we ignore injustice, it grows.” — Mike Diederich DA candidate

“Divide and conquer – that’s what’s really happening, and in the meantime, while we’re dividing and ripping each others heads off, someone has their hand in our pocket.” — Schenley Vital, Clarkstown Ward 3 candidate

“I think that we have a pothole crisis in Clarkstown…and every town. I have told everyone I will take a $40k pay cut to help this pothole crisis. I will put that money into equipment to attack potholes.” — Tom Martens, Clarkstown Highway Department Superintendent Candidate

“We must look at what brings us together, and not what divides us.” Nicole Doliner – Clarkstown Supervisor Candidate

There’s a lot of work that must be done to address all of these concerns. The ugliness and division needs to stop. We need to elect people that can build bridges across the differences in our communities and stop scapegoating parts of our community just to get elected. Rockland needs to work together. We need to be a house united.

We need elected leaders that put community above party, rationale above rhetoric, and accord above division.

Ken Sharp is a Valley Cottage resident. His op-ed Six Steps to Saving Rockland, a road map for the county to address its issues, has been read over 18,000 times on NyackNewsAndViews.com. 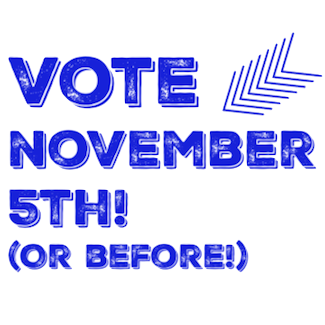