Joe Hazucha has placed a “Constitution Banner” hanging from the roof at 79 Main St near South Broadway in the Village of Nyack. On Wed Oct 2 at 7p, the Zoning Board of Appeals will discuss his application for two area variances required for signage.

We… hold the power, and bear the responsibility….

These three words define the United States. Not since the Civil War has the United States faced the threat we are facing today – the beginning of a Constitutional crisis tearing at the very fabric of our fragile democracy. 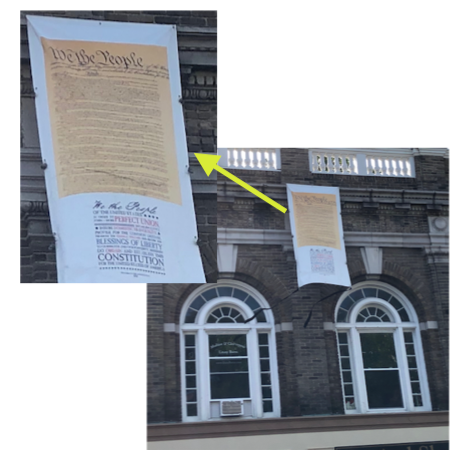 A few months ago, with the support of my landlord, I put up a banner of the United States Constitution on the building where I work  as a reminder of how and why our democracy exists and as a visual warning of what we could lose.

When I was a commissioned officer in the United states Army I took an oath to the United States Constitution. In the waning hours of Secretary of Defense James Mattis’ short tenure he issued a directive to all officers, reminding all concerned of that oath.

When I hung this banner it was cited as a violation of certain Nyack Village codes and fines were issued. Refusing to take it down, I followed all Nyack village procedures for public signage. Having passed the scrutiny of the Nyack Architectural Review Board, I am now asking for final approval by the Nyack Zoning Board of Appeals (ZBA).

I will be appearing before the ZBA on Wednesday Oct 2 at 7p to ask for final approval to keep the “Constitution Banner” in place at 79 Main Street. Several young activists who helped me place the banner will be present. I invite all patriots to attend.