Under Elms  is the fourth edition of Nyack People & Places’ Barons of Broadway series, tracing how Upper Nyack farmland was converted to large estates by the nouveau riche of the Gilded Age. The series looks at the estates along the Hudson River and the people who built them. 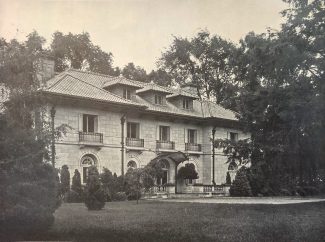 Under Elms circa 1925, Nyack and Vicinity in Pictures. Courtesy The Nyack Library

Among the richest barons ever to live on N. Broadway in Upper Nyack was Wilson P. Foss, a self-made, Gatsby-esque presence who built a large riverfront chateau called “Under Elms” in 1908.

Foss was an entrepreneur, a dynamite salesman, a manufacturer of nitroglycerin, a quarry owner, an American amateur billiards champion, a golfer, boxer, yachtsman, and alderman. He served as Mayor of Haverstraw. He had an impressive art collection. And he survived two lethal explosions, and also a stabbing. Most interesting man in the world? Maybe.

His 21-room Under Elms mansion, so named for the huge elm trees near the house, stands today at 531 N. Broadway, much as it did when it was built, a testament to an individual who was firm in his convictions and would fight to the bitter end if he thought he was right.

Foss was competitive, a driven man whether he was fighting for his business in court, setting the amateur record for number of straight shots made in billiards, or writing a letter to Theodore Roosevelt.

Some battles he lost. While Vice President of the Rockland Trust Company, he advocated for making the new building at the corner of Main and Broadway six floors high (it would be three). More often, he won. At age 74, he took on his chauffeur in court for damaging his Cunningham limousine in Flushing while Foss was at his Manhattan apartment. Foss sued for $2,000, the chauffeur countersued for $75,000 for the humiliation of being jailed. Foss’s skill in court won the day, and he was awarded a total of $613.36.

Son of a cigar box factory owner, Wilson Perkins Foss was born in Fairfield, Maine in 1856. At age 16, he left home with the Portland Fire Department to assist at the great fire of 1872 in Boston. Foss stayed on, working in a hardware store that specialized in dynamite and black powder while taking chemistry classes at night at MIT.

Learning that the West Shore Railroad was being built from Weehawken to Albany, Foss moved to Haverstraw for a job using his knowledge of nitroglycerin, a perfect explosive to “blow the tunnels.” He was hired to build the 1,600-foot Haverstraw tunnel. He would make the nitro at various places along the river and transport it by boat to the work site.

He took his first of many steps in buying and selling companies when he sold his nitroglycerin works to DuPont for cash plus a lifetime annuity. He also took a job with them as a dynamite salesman in Mexico. Within a year, he returned to America for a stint making explosives for an iron ore company in Plattsburgh.

An accident changed all that, and he returned to Rockland County, establishing the Clinton Dynamite Company in Haverstraw with a factory near Snedeker’s Landing. His first contract was with the Rockland Lake Trap Rock Company located at the foot of the clove leading from Rockland Lake to the Hudson River. 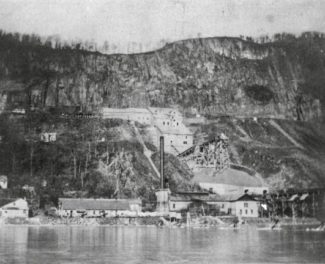 In just a few years, Foss bought the trap rock quarry and modernized it to produce trap rock faster, helping meet an increased demand for use in road paving and building as NYC grew rapidly at the turn of the century. Trap rock is hard, igneous rock, and the Hudson Palisades was a perfect source. The cliffs were dynamited, the rock was crushed, and then loaded into barges, which Foss also owned. Foss began buying up other quarries in the region forming the New York Trap Company that ended up with a controlling interest in the Manhattan Trap Rock Company that was busy blowing the face off Hook Mountain at the end of Broadway in Upper Nyack.

Other “barons” of the age living near the Palisades were upset. Weschesterites like the Rockefellers were unhappy that their view of the Palisades was being ruined. Colonel Pollock and Arthur Tucker, who owned mansions near Hook Mountain, sued on the basis of noise and dust. Elsewhere, a preservation movement was underway, and the Palisades Interstate Park Commission (PIPC) was formed to buy old quarries. Foss fought them in the courts for a decade. One of his opponents,the head of the PIPC board, was Justin DuPratt White, who lived only a few houses south of Foss. In 1917, PIPC condemned the Rockland Lake quarries, paying Foss $2.4M.

By 1921, Foss was back as CEO of a new corporation, the New York Trap Rock Corporation, which owned a number of properties, including the mine at the clove in Haverstraw, and acquired others, such as the Tomkins Cove Stone Works. 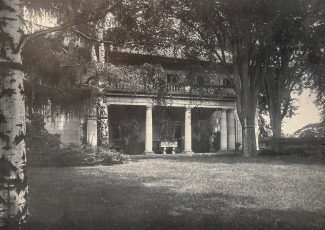 South side of Under Elms in 1925. Elm trees are growing on the right side (southeast) of the building.

Like a cat, Foss was a man of many lives. Different accounts exist of Foss’s survival from the first of two deadly explosions in Plattsburgh in 1886. Foss was in the nitro factory when an accident caused 900 lb. of nitro to explode, demolishing the building, killing two workers, and blowing Foss out of the building onto a frozen river. In one account, he was found shirtless with two broken legs and a broken arm. In another account he walked back across the river to greet rescuers unhurt.

In 1891, the nitro works of the Clinton Dynamite Company exploded at Snedeker’s Landing at the Clove in Haverstraw. Foss was in his downtown office at the time, which was lucky because all five people at the works were instantly killed, nearby houses were blown apart, trees were uprooted, and windows were blown out for miles around.

In 1902, while working in the Rockland Lake quarry office, an ice barge tied up at the quarry docks. William Sands, the captain of the barge, refused to move further down the dock. Foss took matters into his own hands, jumped on the barge, and started to loosen the lines. A fight ensued in which the amateur boxer Foss decked the barge owner. After completing the move, the barge owner came after Foss and stabbed him in the leg with a knife. Erickson jumped in a row boat to escape cross river to Sing Sing. Foss chased him in a company skiff, catching him and knocking him out with an oar on the state penitentiary beach. Sands was to serve 10 months for assault.

Foss purchases the property for Under Elms 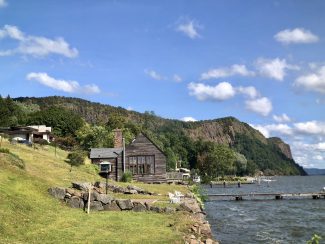 2019 view towards Hook Mountain as seen from the former location of the dock at Under Elms.

In 1908, Foss acquired 37 acres in Upper Nyack, a narrow strip 600-feet wide fronting the Hudson River and running west all the way to the top of the mountain. The eponymous Foss Drive that begins at Midland today runs through the middle of the original property. Foss had the existing house on the property moved across the street to the top of a rise that would later become the home of one of his daughters; it still stands today overlooking Broadway.

The builder of Foss’s new home, E.E. Waite of White Plains, who had built a number of mansions and hotels in Westchester, estimated the house to cost $117K and by adding the stable, garage, garden walls, pergola, a brick herringbone-patterned driveway, and boat house, the sum would be $250K, almost $7M in today’s currency. Most barons of Broadway built street-side brick or stone fences in front of their mansions. Foss selected Indiana limestone as the primary building material, importing Italian masons to build it.

1930s view of rhododendrons on the river side of Under Elms. Courtesy of the Foss estate.

The finished house was huge, with 21 rooms, seven baths, three small apartments, an elevator, a three-car carriage house, a boathouse, a dock, all carefully manicured. 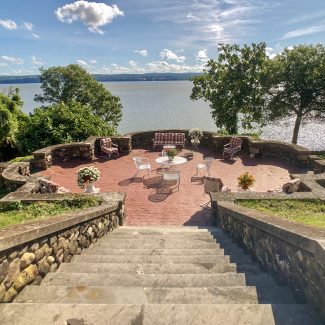 Leavitt’s design for the back patio and stairway leading down from Under Elms.

Charles W. Leavitt, who called himself a landscape engineer, was hired to design Under Elms and its grounds. Leavitt designed Forbes Field in Pittsburgh, the grandstands at Saratoga Racetrack, and the Untermeyer house and gardens in Yonkers, among many other buildings.

Leavitt came to Foss’s attention since he had just designed the gardens of his next-door neighbor, Leroy Frost. Ironically, Leavitt had been hired in 1901 as a landscape architect for PIPC, which Foss was fighting to prevent his quarries from becoming parkland.

Foss died in September, 1930 in his Upper East Side apartment where he was staying while seeing a specialist. Some obituaries list pneumonia as the cause, some heart failure, and in one case that illness was brought on by a fall while inspecting one of his mines. His wife, Ana Debaun Foss, and daughter, Ruth Foss, continued to live in the house until Ana’s death in 1940. Two other daughters had already built homes on part of the property along Midland Ave. His son, Wilson P. Foss Jr., was named executor of the estate.

In 1945, Under Elms, on its landscaped four-acre riverside plot, was sold to William Perry. Under Elms was next auctioned off in 1949, although not for the best since the house reverted via foreclosure to W. P. Foss Jr. in December, 1949. In 1951, Under Elms was sold to Daniel Kalina, who made the house into one of the first assisted living homes in America, advertising in the New York Times and retaining the name Under Elms. Much later, Kalina converted Under Elms into a luxury condo complex called River House, as it remains today.

Foss’s son and grandson carried on the family tradition as CEO of the quarry, continuing to expand its presence locally in West Nyack and Haverstraw. In 1965, the company was sold. After passing through several owners it became what is today: Tilcon. The sons carried on collecting oriental pottery and art, and they donated to many area museums, including the Metropolitan Museum of Art.

Ironically, the grandson of the man who fought tooth-and-nail to maintain control of his Hook Mountain-eating quarry turned out to be an ardent environmentalist and conservationist in Nantucket and the Katonah area, where he donated 47 acres to establish the Marion Yarrow Nature Preserve.

But Foss’s greatest legacy? His stately home that blends so naturally into the shady slopes of the Hudson River.

Special thanks to Tom Englert and Marie McGuire for their photos and property history; the privately distributed River House History, Beth Potter, 2007.