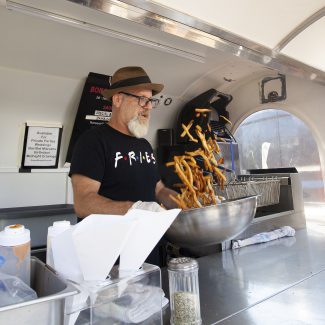 The aroma of fresh-made French fries drifts up and down Main Street on the first and third Nyack Farmers’ Markets of the month. If you love French fries–who doesn’t?–and you follow your nose, you’ll find a glowing orange, 8’ by 5’ mobile cart manned by city born and bred Brian “Bongo” Davis. If you’re used to fast-food frozen fries, you’ll be stunned by the gourmet fries from Bongo’s Fries. They’re made in the Belgian style: hand cut, twice fried, served hot in a cardboard cone with a choice of five different sauces. Drum-roll, please.

A brief history of French fries

Modern fries, much to the chagrin of the French, were invented in Belgium, where they’re called frites (French) or friten (Dutch). Known to Americans as French fries (or, for a brief moment, Freedom fries), the name may have originated when Americans started eating Belgian fries during WWI. Since French was the language of the Belgian army, their nom de plume became “French fries.” Belgium has myriad French fry restaurants called baroque a frites, or more commonly friteries.

Friteries in Belgium sell fries with a number of seasonings. Some friteries are open all night, some are housed in a special dark, old-school shed called a fritkot. Leave it to Bongo to make the old-school Belgian-style, new school American with his orange “fritkot.”

Brian Davis: A life of fries

“My parents would take us kids out for ice cream after dinner, and I would order fries anyway,” says Brian “Bongo” Davis. To top it off, while doing acting as a child in TV commercials, he appeared on an Ore-Ida French fry commercial in 1981 (and yes, it’s on You Tube). Fries have been a passion for Bongo ever since. 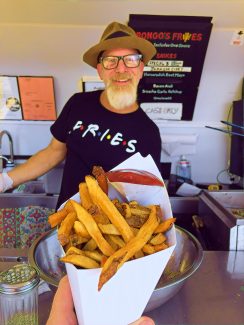 Another passion for Bongo has been opening his own business. Stints as a bagel delivery man, dog walker, and bar manager led to him starting a bar just before 9/11. It was an unfortunate time to start a new business. But still, he kept his dream alive. After moving to Nyack, Bongo decided it was time to turn his love of Belgian-style fries into a business. He thought about whether he should start a shop or buy a food wagon, and ended up with a cart.

A bundle of energy and drive, Bongo designed his own cart and had it custom built to his specifications. He researched what colors made people hungry, and settled on orange (red is the number one color for hunger, but number two is orange). In addition, orange is reputed to make people feel welcome. With his trademark cloth welcome mat, Davis opened Bongo Fries in March, 2019.

Does Bongo have a secret fry recipe? 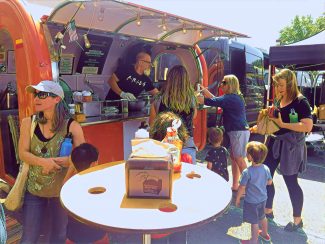 Busy day at the Farmers’ Market

Yes, and no. He’ll tell you how he makes his fries: He starts by hand, cutting skin-on Idaho russets; then he soaks the fries overnight; he does the first of two separate fries early in the morning; he double fries in the Belgium style at two different temperatures, the lower for the interior cooking, and the higher for a crisp exterior. His salt is custom-made, with his own blend of spices. And Bongo has a rotating list of his own sauces that he makes the night before. He serves his fries in a traditional cone that has a small pocket to hold sauce.

But Bongo’s real secret recipe for fry success is having fun. He wishes everyone well and adds a friendly-guy touch even when there is line of hungry customers. He also has a special way of tossing fries in the air, mixing salt and the hot fries.

To the beat of his drum

Some may guess the name Bongo was invented for business. In fact, Bongo picked up the name at college when some friends saw him walking around carrying drums. Bongo still plays drums, and loves to perform. “It’s my escape, since I can’t really sit still,” he says. He is in a Nyack reggae band, JLP and the Very Bad Ideas. They play once or twice a month.

Bongo is also the tour manager of the alternative rock group, The Grahams. As a tour manager he plans the dates, organizes the venues, and travels with the band. In early September, for example, he’ll tour with the band for two weeks in England. And as if running a business and working as a tour manager weren’t enough, Bongo also works as a video (and sometimes audio and light) engineer for corporate functions. 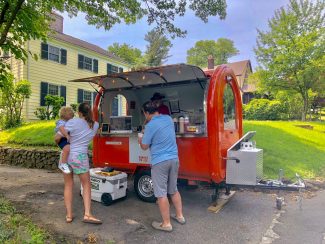 Bongo had visited Nyack but he didn’t know much about the village. A band he was in after college played Nyack once. With a group of motorcyclists, Bongo would stop for lunch in Nyack after riding from the city to Bear Mountain ride.

He moved from the city to the suburbs as his daughter grew. First living in Riverdale, he visited good friends who lived in Nyack and without knowing much about the village, his family moved to South Nyack five years ago. Bongo says he has loved every minute of his time here, especially the people. His wife and daughter support him 100% and it doesn’t hurt that his daughter loves fries.

Where to find the fries

Bongo has cooked fries at Sing Sing Kill Brewery, and you can find him cooking fries on selected nights at Industrial Arts Brewing in Garnerville. You can always find him on the first and third Thursdays of the month at the Nyack Farmers’ Market. Like a magician in his distinctive hat, Bongo can turn up anywhere with his orange cart, be it a wedding, the West Nyack Swim Club, or John Curley’s Upper Nyack pottery sale.

Photo credits:  Photo of Bongo flipping fries by Luis Bruno, all others photos by Mike Hays