Environmental law teacher Karl Coplan of West Nyack—Rockland County’s own guru of the low-carbon lifestyle—has been living well on a modest (for the industrial world) four-ton-per-year carbon-emissions budget. He reports on his quest with regular posts to his Live! Sustainably! Now! blog.

This past spring, Coplan made a solo cross-country bicycle journey, blogging his daily progress from Atlantic to Pacific. But did the buckets of trail mix and mountain of donuts that fueled his two-wheeled trek send his carbon budget into the red?  Coplan runs the numbers here, in his latest blog post.   – Editor

I’ve traveled quite a ways this summer with minimal fossil fuels and without leaving the ground—New York to California, and Vancouver, BC and back; then, more recently, New York to Charleston South Carolina and back. I managed to hit three of the four corners of this country. So what’s the carbon tab for all this travel?

Followers of my Live! Sustainably! Now! blog know I rode a bike to Oregon and California in May and June. So, did I really save on carbon emissions by biking the whole way there? You occasionally see articles like this one claiming that bicyclists emit more carbon replacing the calories they burn than driving a car would have emitted, but that makes the pretty bogus assumption that the bicyclist replaces all of those calories with red meat, and that the car is a fuel efficient hybrid. 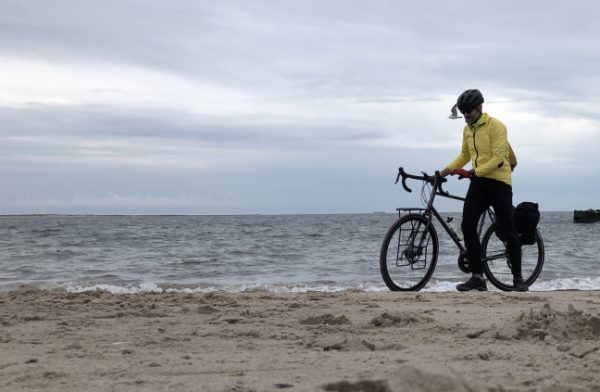 For my own direct carbon emissions impacts, I can say pretty confidently that all of the energy I burned crossing the country came in the form of non-fossil solar generated biomass—also known as food. Since all the carbon dioxide I exhale converting this food into transportation energy is being recycled by crop production more or less contemporaneously, I don’t treat these extra calories as part of my direct footprint, except to the extent they are foods (like beef and lamb) which cannot be produced without substantial greenhouse gas (GHG) emissions.

But what if I apply a life-cycle analysis to the extra calories I burned crossing the country? Does riding a bike really beat taking a bus or train?

I rode about 3,500 miles to get from New York to California, over about 45 full days of riding. My Runtastic cycling app calculated calories at about 35 per mile (though some sites, like this one, suggest a higher figure). That works out to about 122,500 calories for the trip. That’s a lot of calories. I am not sure I actually replaced them all (I lost twelve pounds on the trip and got very skinny), but let’s use that as a ballpark figure.

What did I actually eat to make up these calories? I did not keep track of everything I ate, but I know that I did not really increase the kinds of foods or portion sizes for my regular meals (except to the extent that healthy food and vegetables are really hard to find in small towns along the way). I continued to mostly avoid red meat, sticking to chicken, pork, fish, and–where available–vegetarian options. Not many vegan options at the Range Cafe in Bassett, Nebraska, for example. 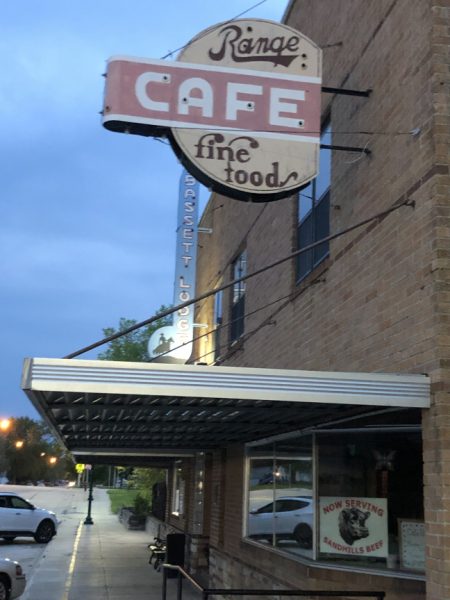 Instead of eating more of my regular food, I ate two extra things: trail mix and junk food. The trail mix was mostly a homemade mix of raisins, peanuts, and chocolate M&Ms in roughly equal proportions. I kept a 12-ounce cup full of it on my handlebars and ate it while riding all day. I went through about one of those cups each full day of riding. At 209 calories per quarter cup, 45 days of this diet supplement probably made up about 47,000 of the 122,000 calorie cost of the trip.

The other thing I ate was the worst possible junk food, since empty calories were exactly what I needed to burn–and also because junk food is the only food you can buy in most the small towns I passed through, if you could buy any food at all. I’m talking full bags of Hostess Donettes and fruit pies, or anything else that was full of starch and sugar. Since starches and sugars are both about 4 calories per gram, this works out to about 19 kilograms (kg) of sugar and starch to make up the other 75,000 calories. That’s over 40 pounds of donuts. I find it hard to believe I actually ate 40 pounds of donuts in 45 days, but it is not out of the question.

What is the carbon impact of my trail mix and donuts (and donut equivalents)? I found a handy food products-to-life cycle GHG equivalent emissions here. Based on some calculations, it looks like the trail mix worked out to about 3 pounds of carbon dioxide emissions (CO2e) per day–or about 138 pounds, or 47,000 calories–of trail mix for the whole 45 days. Chocolate was the outsized carbon cost in the trail mix. The junk food was much more carbon efficient—about 20 pounds of CO2e for 75,000 calories. That’s almost an order of magnitude better than the trail mix, though I may be understating the trail mix calorie contribution. In calculating the junk food carbon emissions, I assumed 70% of the junk food calories came from flour, 15% from sugar, and 15% from corn syrup. 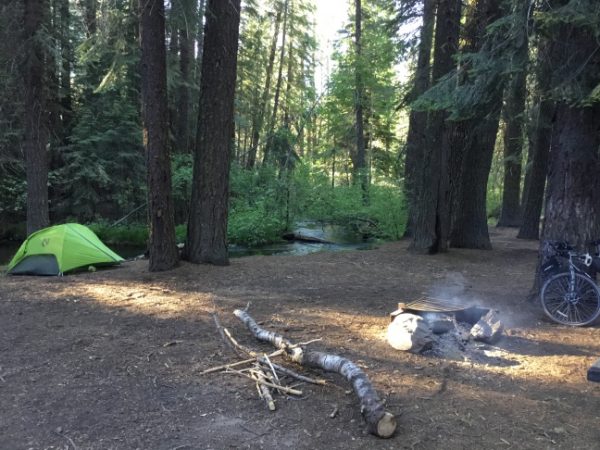 Camping in the Woods at Scott Creek, Oregon, after a week of riding in the sage desert. Photo: Karl S. Coplan

Total carbon emissions for the bike trip, therefore, were about 160 pounds, less than one-tenth of a ton of carbon emissions. This is quite a bit less than the return train trip by Amtrak, which was about seven times more, or 1,100 pounds—just about the same CO2e as an economy flight. Driving the same 3,500 miles in a Toyota Prius would have burned 70 gallons of gas for about 1,400 pounds of CO2 emissions. 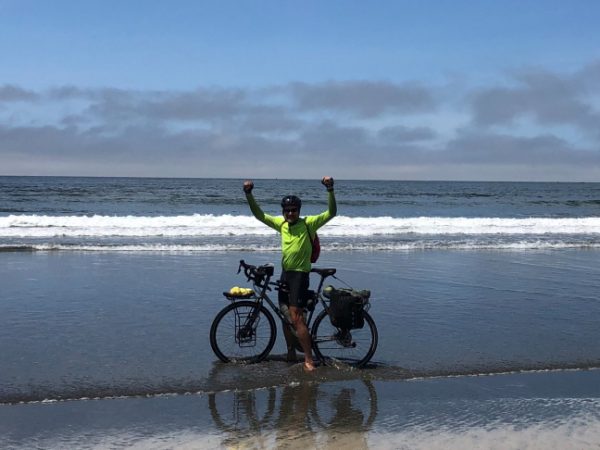 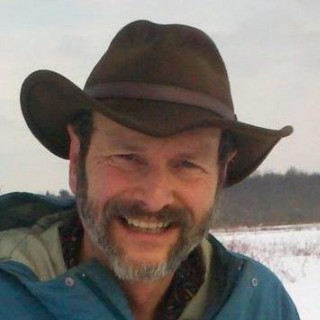