This simple roast chicken is perfect for a chilly fall or winter night. It requires minimal preparation and cooking time. I like to roast a bulb or two of fennel (also known as anise) along with the chicken and serve it with a salad of some sort–I find watercress or arugula both work well.

The key to this chicken is salting it liberally and rubbing generously with thyme, rosemary and a pinch of chili. 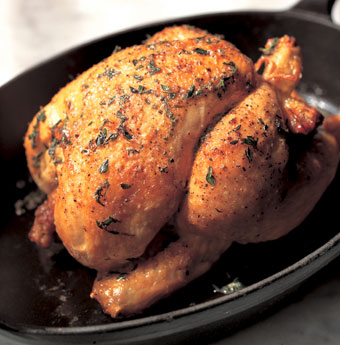 Ben McCarthy is a graduate of Hunter College. He is also the lead guitarist in the alternative rock band Regret the Hour. He loves to cook and try new food, and he grew up cooking with his mother.