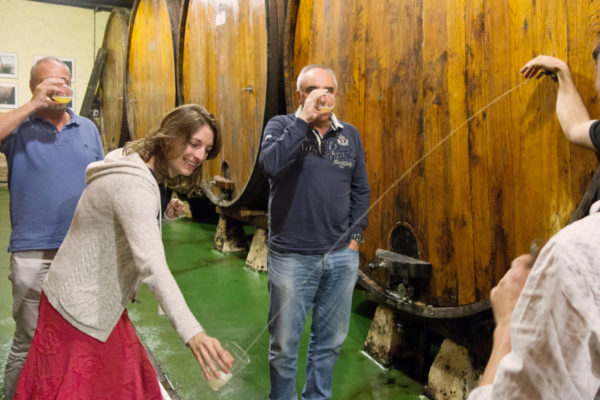 There are few benefits of being diagnosed with celiac disease–as I was in January of 2017–but having to give up beer turned out to be one. It led to the discovery of so many other delicious beverages.

On a hot summer day, few things are as refreshing as an ice cold bottle of basque cider. Basque cider tastes nothing like the vast majority of ciders available here in America–although there are some great smaller cideries on the east coast making great ciders. It has no added sugar, is unfiltered, fermented with wild yeast (the yeasts that grow naturally on apples) and is bracingly funky and tart.

Unlike beer, basque cider isn’t heavy and it is perfect for these blisteringly hot late summer days. But it’s also great in the fall and winter when soups, stews, and heartier dishes become the main fare on our tables. Best of all, basque ciders pairs well with just about any food. Drink it with cheese and cured meats, with anything grilled, with spicy thai food, with tacos, seafood, oysters. Or just drink it on its own.

The basque country has been producing cider for over 800 years and the tart and refreshing drink is so essential to Basque culture and history that, as has been reported, “traditional dwellings had apple presses built directly into their central timbers.”

Like grapes used in the production of wine, there are hundreds of varieties of apples, some better suited to the production of cider than others. In America, many of the older, lower-yielding varieties were lost during the Industrial Revolution, when high yielding apple cultivars began to be favored. In the Basque country, however, many of these old, eccentric and lower-yielding cultivars are still planted and harvested today. While their yield may be more erratic, they produce a more interesting and delicious cider than many apples that are strictly bred for eating.

But what to buy?

Isastegi is one of the easiest basque ciders to find. Astor Wines sells its for $8.96 a bottle (750ml). Other great options are Barrika, Gurutzeda, and Bereziartua. If you can’t find any of these bottles, Newburgh-based cider maker Graft has some excellent sour ciders that aren’t technically basque ciders but are produced in a somewhat similar style and are still delicious and refreshing.

Basque cider may catch you off guard at first. It is far less sweet or carbonated than the ciders that we commonly consume in the United States. But it will also thrill you. Unlike its American, French, and British counterparts, Basque cider has a robust, earthiness, a savoriness that pairs well with a broad spectrum of food and a light tartness that allows it to be drunk all evening long. It’s safe to say that it is my new favorite drink.

Ben McCarthy is the chief culinary correspondent for Nyack News & Views. He plays in the band Regret the Hour.