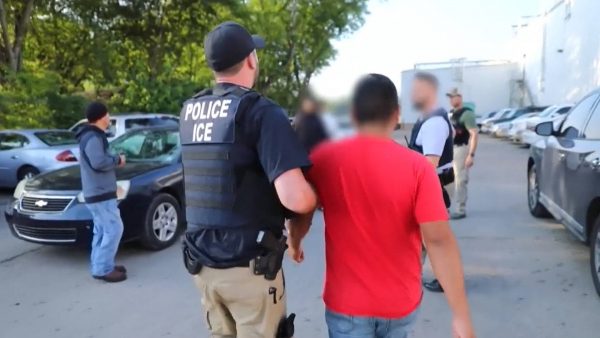 But the Community Prepares for Possible Future Raids

by Maddie McCann
Social media was abuzz Wednesday, July 24, as U.S. Immigration and Customs Enforcement (ICE) was rumored to be conducting raids in Nyack. ICE carried out numerous raids across the country throughout mid-July, and it seemed as though Nyack was to be one of the many places the organization targeted. However, after further investigation, the raids proved to be unverified.
The South Nyack, Nyack Village, and Clarkstown Police departments were unable to corroborate the reports of ICE’s presence in the area. Representatives of the Immigration Defense Project (IDP), which “works to secure fairness and justice for immigrants in the United States,” had also heard rumors about ICE in Nyack but had not been able to verify them. And Andrea Panjwani, the Director of Legal Services for Rockland County’s Center for Safety and Change, said that she “spoke with [her] colleagues who fact check ICE actions,” and they “were not able to confirm ICE arrests in Nyack.”
There do, however, appear to be efforts in the works to prepare for potential future raids. “We are collaborating with various partners and will be holding Know Your Rights events/legal clinics throughout the county so that immigrants are equipped to exercise their rights in the event they are stopped by ICE,” Panjwani said. “Rockland Immigration Coalition is also in the process of gathering support for an Immigrant Protection Act here in the county.”
Although the ICE reports remain unsubstantiated, on social media they appeared real and imminent. Local residents’ feeds were flooded with talk of the raids. But the posts seem to have been catalyzed by other posts, as opposed to firsthand sightings or experiences with ICE. Maria Aragao-Famularo, one of the many Rockland County residents that posted about the raids, said that she “saw multiple posts from people on Instagram and Facebook and decided to share because of that.”
Many locals’ social media posts were supportive of undocumented immigrants, and encouraged people to be careful and spread the word. However, other posts celebrated ICE’s arrival and condemned the efforts to warn immigrants.
Across the board, though, the language used on social media had a vitriolic tint. One expletive-filled post supportive of immigrants called ICE’s presumed actions “disgusting,” while another post supportive of ICE happily proclaimed that people should “start gathering [their] papers.” As in the rest of the country, the topic of illegal immigration in Rockland proves to be divisive and emotionally charged, regardless of whether the threat is real or rumored.
Maddie McCann attended Nyack High School and is a recent graduate of Colorado College.