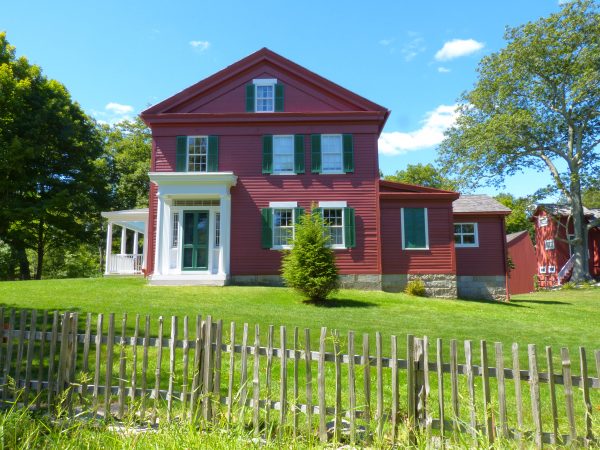 by Steve Kelman
Weir Farm National Historic Site, located in Wilton, Connecticut, is unique for two reasons. Not only is it the only National Park Service unit in the Nutmeg State, it also happens to be the only such park in the system dedicated to American painting.
For more than 120 years (1882 through the mid- 2000s), three generations of American artists lived and painted on the premises of this National Historic Site.
Starting in 1882, Julian Alden Weir, who would come to be known as an American Impressionist painter, paid $560 to acquire what was then a 153-acre farm. This farm would serve as his home and studio for the next 40 years. It was there, among woodlands, waterways, pastures, and rocky fields, that Weir and a number of his friends composed their masterpieces, thus shining light on these surroundings.
Seven of Weir’s masterpieces are currently on display at the Metropolitan Museum of Art in New York City, where he once served on the institution’s Board of Directors. Weir would describe the farm, where he lived and worked, as “The great good place.” After Weir’s 1919 passing, two additional generations of artists would follow, pursuing their art in this “great good place.”
Painter John Spring Sargent, one of Weir’s closest friends, summed up his time on Weir Farm, saying, “Life lived at Weir’s place is the finest I’ve ever seen.”

Weir Farm National Historic Site was added to the National Park Service in 1990. Today the park consists of more than 60 acres of woods, waterways, farm fields, and buildings. The visitor center is located in the Burlingham House (Circa 1775-82). This was once the home of Weir’s youngest daughter Cora. The visitor center is the place to sign up for tours, view a film on Weir’s life, look at a number of exhibits, and purchase gifts.

“Here we shall rest and call content our home,” reads an inscription above the entrance door to the 1779 farmhouse where Weir lived with his family. Ranger-led tours of the house are offered daily, and they feature many of the original furnishings that belonged to the Weir family.
Touring the house, you’ll encounter a 1906 Crown Victrola (early phonograph record player) on Wheels, which belonged to one of Weir’s daughters. There is also a self-portrait of the artist in his younger days looking intensely serious.
After the house tour ends, visitors are encouraged to visit the two art studios that are located on the grounds within easy walking distance. These buildings are essentially intact, the way the artists left them.
Weir’s studio was built in 1885, and according to a volunteer docent, it has “everything still in it that Julian Weir used.” The list includes paints, brushes, easels, and frames. The Second studio, was built in 1932 by the sculptor Mahoni Young (a grandson of Mormon pioneer Brigham Young and the husband of Weir’s middle daughter Dorothy). Among his many tools of the trade on view, there are several of his works. Young and his wife would live on the site until 1957.
No visit to Weir Farm would be complete without a walk to numerous gardens located on the grounds.

For the ambitious, an easy hike to Weir Pond can be completed in under an hour. When I took this saunter, I first passed Weir’s outdoor studio in Truant Meadow, known as the “Palace Car,” and then several locations along the way where Weir painted.
Truant Meadow is the official beginning of the 1.1 mile round-trip trail. The path takes you to a four-acre fishing pond, which Weir created by building a dam. The trail is marked by yellow blazes, and although considered easy to most walkers, should be avoided by those who have trouble walking.
Along the trail, I heard numerous species of birds, including the eastern woods pewee, some very noisy robins, the tufted titmouse, and black capped chickadees. A family spending the lazy warm afternoon fishing told me they were successfully catching numerous trout and sunnies on their outing.  A number of bullfrogs were also making their presence known with their vocalizations. Towards the end of the hike, back in the meadow, a red tail hawk flew across the trail a little too close for comfort.

Weir Farm National Historic Site is located at 735 Nod Hill Road in Wilton, Connecticut. The park’s buildings are open from May 1 through October 31, Wednesday through Sunday from 10a to 4p. Tours of the house are given at 11a, 1p, 2p, and 3p. The grounds are open year-round.
Phone: 203-834-1896
Distance: The drive from Nyack is slightly over an hour.