My name is Jadyn Turner and I will be a sophomore at Nyack High School this fall. My cousin Alyssa Alhadeff was killed in the shooting at Marjory Stoneman Douglas High School in Parkland, FL on February 14, 2018. On Sunday August 18, there will be Rally to End Gun Violence at Nyack Veterans Memorial Park at 4p. I hope you will be able to attend. 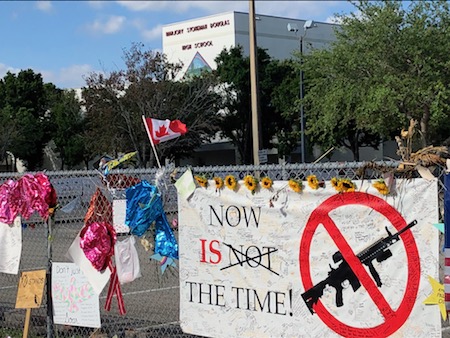 Just weeks after Alyssa was killed and I decided to get involved with Students Demand Action. I’ve participated in multiple advocacy days where I have talked about common sense gun legislation, including our local March for Our Lives rally which was held just weeks after Alyssa was killed.
I remember exactly what I was wearing and where I was when my parents told me what happened to Alyssa.
My cousin was an amazing soccer player. She would always beat me when I would play against her in her backyard. She was such a caring person who was fun to hang out with. We would go to LBI every summer and have sleepovers all the time where we would stay up late laughing and talking.
Sunday’s rally on Main Street at Cedar St in Nyack is a joint effort of Students Demand Action Rockland, along with the help of Moms Demand Action Rockland. Students Demand Action is a non-partisan group that works for gun sense legislation in America.
Despite our efforts to end the epidemic of gun violence in America, the killings continue. While attending the recent Gun Sense University with Everytown for Gun Safety with 2000 Moms Demand Action and Students Demand Action, we heard about the El Paso shootings. The next morning all of us learned about the shootings in Dayton, Ohio. These shooting cannot keep going on.
A rally to honor the lives cut short by gun violence and demand common-sense gun reform. Volunteers will demand action from their senators to pass a strong federal Red Flag bill and legislation to require background checks on all gun sales.

My generation should not have to look over their shoulders every time they enter a classroom. We should be able to live in a world that is free of gun violence where we are safe to walk around with our friends not worrying if we will come home that day. What does “life, liberty and the pursuit of happiness” mean if we have to constantly live in fear of gun violence?
Students can make a difference, but we need everyone’s help. Please come to our rally on Sunday at 4p to show your support for our efforts.

Jadyn Turner is a Nyack High School student and a member of Students Demand Action Rockland.