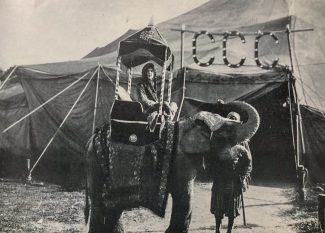 In the late 19th century, Nyack was regularly visited by elephants, acrobats, and tightrope walkers. The village was a regular stop for circuses that toured the country by railroad in the late 19th century. The circus company would arrive, stay for a single performance, and then move on to the next town.
But in the early 20th century, Nyack had its own circus, the Clarkstown Country Club Circus, with its own animal trainers and a professional acrobat school. Only open to the public once a year, usually in September, and housed in America’s largest privately-owned canvas tent, the circus was in Nyack most of the year with a style that is unique to the village: Individualistic, bohemian, artistic, and unpredictable.

The railroad circuses come to Nyack

Circuses were widely advertised in the Rockland County Journal from 1860-1900. Circuses such as the Union Circus and the New York Circus held shows in Nyack before 1870 when the Northern Shore railroad was opened in Nyack. But the railroad brought circuses to town more frequently.

The circus would parade from the train station, at the corner of Franklin St. and Cedar Hill Ave. to the circus lot, which for most of the early years was “near Mrs. Frewelling’s house” at the corner of Midland and Depew Aves. At the time, Midland ended at Depew and a large open space now encompassing many blocks provided ample space for the circus.  Later, going into the 20th century, the circus lot was on Main Street across from the ice pond, roughly where the NYS Thruway crosses Rt. 59 now.
The circus lot was still in place in 1932. Hunt’s Three Ring Circus, performed on the circus lot on Friday July 15th, 1932 for two shows plus a free street show. By that point, circuses were motor circuses, so there was no longer the circus parade from the train station. 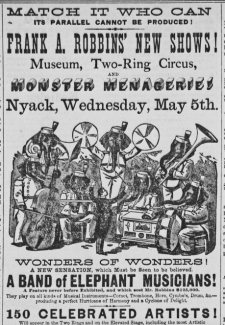 Nineteenth century circuses in America were modeled after the equestrienne circuses seen in Europe with acrobatic acts performed by horses and riders. Stone and Murray’s Circus, advertised as a “chaste, elegant, and refined” circus, held two shows on August 27, 1870. The show included the daring funambulist M’lle Ellsler, who did a tightrope act; the great equestrian John Henry Cooke, who appeared with “six naked horses”; Mr. Wm. G. Franklin, the paragon of somersault equestrians; and various other acrobats, horses, and clowns.
By 1884, other animals besides horses appeared in the shows. O’Brien’s Six Shows, along with Lowanda’s Greater Brazilian Circus, appeared on September 8, starting with a parade with two bands, wide-open dens of savage monsters, and 100 royal marchers. Bareback horse riding acts still seemed to dominate, but now with animals. Handenberger’s German Menagerie and Astley’s London Aquariums brought along wild birds, beasts, and reptiles, including the twelve-foot elephant, High Empress, and a hippo.

Van Ambugh’s American and Japanese railroad show was performed on October 15, 1885, and featured a museum, aquarium, and menagerie with Quedah the elephant. Frank A. Robbins’s two-ring circus held shows on May 25, 1886, advertising 150 celebrated artists, 13 elephants (one of which was a ludicrous clown elephant, others formed a musical elephant band).

Pierre Bernard and his group of yoga enthusiasts began buying property in Nyack just after WWI, first in Upper Nyack and then in South Nyack, where Bernard purchased the Stephen Bradley estate on South Mountain, now Nyack College. Their group became known as the Clarkstown Country Club. Depending on one’s perspective, Bernard was either the founder of yoga in America, a charlatan, a spiritualist,  an entrepreneur, head of a commune, or all of the above. At various times, he was arrested and sued, owned an airport in Nyack, built a sports arena, had 300 resident members of the club, a lending library of 7,000 books, and a theater that seated 800. The club declined during WWII, and Pierre Bernard died in 1955.

Circus tent for the C.C.C. Circus

Among the many unusual events on the Clarkstown Country Club campus was the circus. Bernard had collected a number of animals, including five Bengal and four Sumatran tigers, several lions and lion cubs, spotted and black leopards, bears, monkeys, a gorilla, a dwarf stallion, llamas, exotic birds of all sorts, and elephants that lived on the campus year-round except when sent on tour with other circuses. In keeping with a life-affirming philosophy, the club practiced humane animal training.

At one time Bernard owned as many as nine much-beloved elephants, including Mom, who lived to the age of 92. The elephants would also work at the club plowing fields, and they were loaned for parades in Nyack, leased for acts at the Ringling Brothers and other circuses, and appeared at the national Republican conventions.

For many years, along with teaching yoga and physical fitness as a pathway to spiritual health, Bernard ran an acrobatic school that was led by Edward Evans of New York City. Evans, who was known to be able to perform almost any known feat of acrobatics, had long been associated with circuses and vaudeville worldwide.
The main gym was in a building known as The Brick House on Broadway in Upper Nyack, once the home of Hugh Maxwell and the clubhouse for the Nyack Country Club. Mats were spread out in the casino that had been used for plays and dancing during the country club years. Over 200 acrobatic tricks were taught, from the elementary cartwheel to the triple conjunction porpoise dive.
During the summer months, the acrobatic club moved to the 15,000 square foot circus tent that allowed for the rigging of trapezes, flying rings, slack wires, and other aerial apparatus. Member of the acrobatic club could also use the glass-covered swimming pool, four of the best tennis courts in the county, and a “skinned” baseball diamond.

C.C.C. members prepare for the show

A “formal” circus was held every year, usually after Labor Day. Many of the circuses were private; if you didn’t have an invitation, you were turned away. In 1929, guards handled the gate and hundreds of automobiles, many with chauffeurs carrying fashionably attired women. The venue was the large canvas tent along with other tents used as dressing rooms and side shows. All the costumes and food were prepared by club members.
The performers, human and animal, were on-site club “members.” The elephants were the big hit of the shows. Juno was dressed as a clown riding a tricycle, Bood walked a tightwire forward and backward and balanced on a four-inch beam. Elephants paraded over a prone woman without touching a feather on her costume. The trainer would put his head into the elephant’s mouth. Pierre Bernard often would appear performing a dance with an elephant called “The Barber’s Itch.”

The circus then and now

Circuses were a staple of village life for nearly 100 years. While the circus no longer resides in Nyack, the circus has never really left. Our bohemian community, filled with performers, artists, and filmmakers, carries on the circus tradition in a way.

AUG. 19 – 23 & AUG. 26 – 30
LONG-TIME CIRCUS CAMP MOVES TO MARYDELL, August 19-23 & 26-30
Performances on August 24, 25, 31, and September 1
Mr. Amazing’s Amazing Grace Big Top Circus Summer Day Camp will take place in its very own circus tent at Marydell Faith and Life Center, in Upper Nyack, NY, on the most beautiful piece of property in the Hudson Valley, during the last two weeks in August.
Not only will kids get a real circus experience, they will hang out in nature, and spend time with kids from many different places and cultures from around the Tri-State area.
As Rockland County’s COMMUNITY CIRCUS with a SOCIAL PURPOSE, AGC! welcomes children from all parts of the NY Tri-state area to participate in a one-of-a-kind circus experience… all under one big top.
Partner organizations include Grace Church Nyack, Marydell Faith and Life Center, Westchester Circus Arts, New Settlement House in the Bronx, Haverstraw PAL, and the Fresh Air Fund in Manhattan.
Register here.

Photo credits:  Life at the Clarkstown Country Club, Nyack, N.Y., 1935
Michael Hays is a 30-year resident of the Nyacks. Hays grew up the son of a professor and nurse in Champaign, Illinois. He has recently retired from a long career in educational publishing with Prentice-Hall and McGraw-Hill. Hays is an avid cyclist, amateur historian and photographer, gardener, and dog walker. He has enjoyed more years than he cares to count with his beautiful companion, Bernie Richey. You can follow him on Instagram as UpperNyackMike.