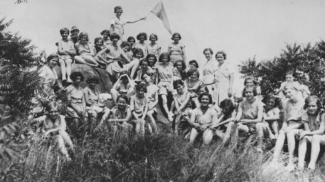 Marydell campers on a hike atop Hook Mountain with Marydell flag, circa 1932.

The sound of children’s laughter was heard at Marydell Summer Camp for over 50 years. Remembered fondly by campers, counselors, and the sisters who attended until the original camp was closed in 1988, Marydell still thrives as one of Nyack’s biggest secrets. Marydell Faith & Life Center is a nonprofit organization on nearly 10 acres of land. It incorporates the old Marydell camp, including the rustic cottages near the corner of Midland and Larchdale Aves, just beneath the towering, steep cliffs of Hook Mountain. The camp is reminiscent of a sweet time when summers were more carefree and entertainment was found in nature.

The Sisters of Our Lady of Christian Doctrine, formed in 1910 in NYC, were given title to 79 acres of riverfront property including the home called Larchdell and the Larchdell farm, stretching from Broadway to 9W abutting Hook Mountain. Unfortunately, John Whalen, a benefactor who bought the property for the sisters and sold it to them for $1, died before the mortgage was clear. The sisters had to pay off the remaining mortgage. When they moved in, the farm and the home were in disrepair. No crops had been planted, the hay wasn’t mowed, and the house was unfurnished.

The convent house, chapel, and riverfront

The Marydell convent house, stables, chapel, and riverfront with a boat dock and small beach were located east of Broadway. The convent house, formerly Larchdell, had been built in 1880 by a wealthy New Yorker, Colonel Alexander Pollock. Next to the stables, a chapel house was built near the border with Nyack Beach State Park. The stables (now a residence) and the convent house still stand. The chapel bell can still be seen from Broadway between the two buildings. 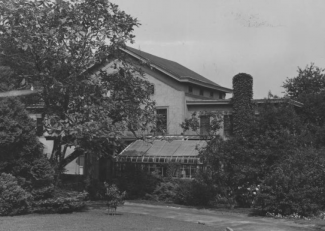 The convent house was known for its flowers, candles, hardwood floors, and colorful scatter rugs. Pets in the early days, as now, played a part in the life of the convent house. In the early days, Polly the parrot, who came from a family with children of varying ages, would show off the cries of a baby, a whimper, and a burst of temper. Many canaries sang in the house, and doves would appear on the sun porch. There were many dogs including a resident big collie and a fox terrier that was found abandoned by Upper Nyack summer vacationers. In 1962, to cover costs, the sisters sold the 20 some odd riverfront acreage to the Raso family of Nyack. The convent house was removed and three modern homes were built on the property.
Near the current Broadway turnaround circle and entrance to Nyack Beach was a forsythia-lined path that led to the Marydell Cemetery. The cemetery was removed around the time the riverfront property was sold. The northern end of Broadway and the land for the turnaround circle was deeded by Mother Marianne in the early days to allow villagers to access Nyack Beach State Park.

The second area of Marydell was farmland for crops and fruit trees. The farm rises west from Broadway. It isn’t hard to imagine an Upper Nyack field here since the land is still open. During its early days, Marydell was called Save-A-Life Farm. Grain crops, fruit trees, produce, eggs, and milk were produced on the farm for many years, supplying the needs of campers and sisters as well as many needy villagers. During the Depression years, homeless workers in search of fruit picking jobs in upstate New York would stop at Marydell hungry and tired. In a long tradition of assisting those in need, no one was ever turned away from a good nourishing meal at Marydell. 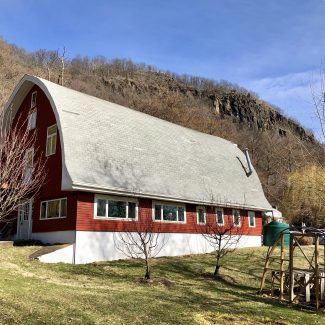 A Sears kit-barn was built around 1929 for housing cows. The barn still stands as Kateri Lodge, a two-floor building now used for meetings at Marydell Faith & Life Center. Also still standing is the old chicken coop, now used as a residence. Most of the fields (and some of the forest land along 9W) were sold to the Palisades Interstate Park Commission in 2017 with the covenant made by the sisters that the land remain forever green.

Near the farm buildings, a number of rustic log cabins were built to form the nucleus of the summer camps, including a dining hall, a recreation hall, and a nursing station facing a large open area. The camp and farm buildings, along with an open field, remain as Faith & Life Center, and are used by a number of groups that utilize Marydell facilities, including Strawtown Studios and One-to-One Learning.
Marydell camp was established as an extension of the mission of the Sisters of Our Lady of Christian Doctrine early in the 20th century, on the Lower East Side. Poor immigrant families, especially children, were given nutritional, educational, and spiritual assistance at the Madonna House on Cherry Street. The addition of Marydell helped expand their mission to include introducing children to nature and self-reliance.

Marydell campers and sister cooking on a campfire

Up to about 150 girls ages six to 16 attended July to September summer camp each year at Marydell. A full staff of guidance counselors and a nurse were on site. The Journal News reported that 73 girls were at camp in August 1932, housed in six rustic buildings. Most girls were Catholic, but girls from other denominations were welcome. The girls wore camp uniforms of blue and white, the Marydell colors, fashioned with divided skirts and sleeveless tops. The youngest campers wore romper suits. Counselors wore white jumpers.
A typical day might include swimming, hiking, rest, choir, crafts, sports, horse riding, and showers. One favorite activity was the fashioning and dressing of marionettes that were used in a summer puppet show. In the evenings, campfires were held in the open area near a tepee below an old farm building, where Marydell currently holds its annual Maple Sugar Day. 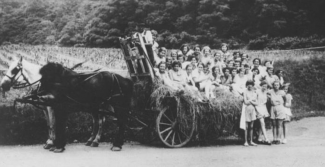 Marydell campers on a hayride, circa 1930.

Each week, one day was spent away from the camp going to Nyack Beach, Rockland Lake, or West Point. One outing in 1934 was to Orangeburg to see the preliminaries of a boxing match staged for the benefit of Marydell.
Near the beginning of August, a play, The Hicksville Bungler, was staged in honor of ten girls who had graduated years earlier and were returning to Marydell for a vacation. Directed by campers Betty Leonard and Anne Doyle, all parts of the drama were played by campers. The play was supplemented by a military drill, a classical dance by the older campers along with recitations and songs by the younger campers.

A closing event was held each year at the end of camp in August. In 1932, a Washington Bi-Centennial pageant was held with every girl in authentic colonial costume. Floats and a parade held in the village advertised the event. The pageant, researched and written entirely by campers, portrayed George Washington from age 10 to 23. 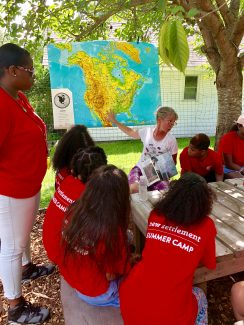 A Marydell class at the Children’s Garden in 2018

Today, Marydell Faith and Life Center carries on the early tradition of the sisters by offering educational and recreational programs, spiritual retreats, and environmental encounters that reflect a belief in social justice and harmony. Children from NYC schools such as the Bronx-based New Settlement commute daily during the summer for multi-week programs. Children can experience the open field near the cabins, a large teepee, a modern swimming pool, playground, and a BBQ/picnic area.
Marydell Faith & Life Center also continues the tradition of Save-a-Life Farm by sponsoring a garden that grows vegetables for Nyack residents of need, which are distributed at St Anne’s Church on Saturday mornings. A smaller teaching garden, the Children’s Garden, next to Kateri Lodge, is utilized to teach children how to plant and grow vegetables. A summer monarch butterfly class is especially popular.
Photo credits: Historical photos courtesy of the Nayck Library, color photos by Mike Hays
See also: