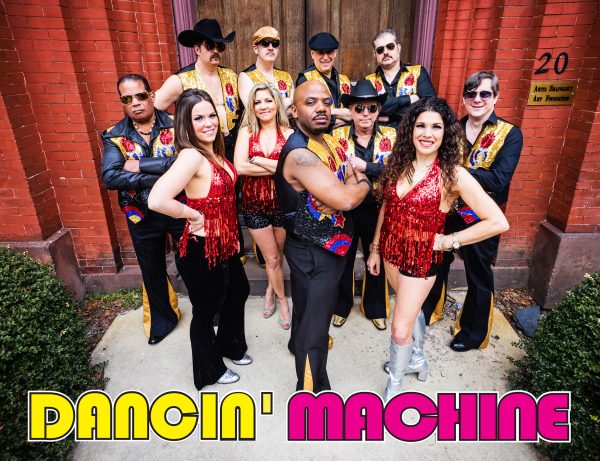 Violet light bounces off a disco ball and lands on an oil painting of a 19th century family posing before the Hudson River. But it’s not a 19th century family, it’s the Parseghian family—the family that has owned and operated Nyack’s West Gate Inn since 1963. The painting is a replica of Thomas Prichard Rossiter’s 1863 painting “Picnic on the Hudson” with the Preghians’ faces painted on the bodies of the original figures. Through a glass door to the left is the dining room, where you can get a slice of blue ribbon-winning cheesecake (voted best in New Jersey seven years in a row). A layer of artificial fog and a dancefloor inhabited almost entirely by 40-somethings lies before an 11-piece powerhouse disco band in full costume.
Where are we?
The West Gate Lounge, the club and banquet space adjacent to the Inn.
What year is it?
Impossible to tell.
What the hell is going on?
It doesn’t make sense, but it’s so, so right… This is the West Gate Lounge’s Friday disco night.

The Parseghian family is the force behind this fantastic hodgepodge. Three generations of the family are represented in the Inn’s staff. As I interviewed Lisa Parseghian Dosch, Director of Sales, Restaurant Manager, and Resident Cheesecake Queen, she gave me a tour of the place. Within the first 30 seconds she pointed out her 91-year-old father’s office and her daughter hard at work behind the front desk. Passing through the Inn’s restaurant, we ran into her brother Jimmy, Food and Beverage Manager and Lounge Manager. “Picnic on the Hudson” introduced me to everyone else. The West Gate’s wholesome slogan, “Where Your Family Meets Ours,” proves to be quite literal. They’ve been putting on live shows in the West Gate Lounge for nearly 40 years, ever since Lisa’s father, Masis, asked Latin jazz legend Tito Puente to come play. After decades of hosting successful salsa and Latin jazz performances, the West Gate Lounge is now a salsa mainstay on the east coast. Though younger—now nearly six years old—the Lounge’s disco night is a no less lively a tradition.
Dancin’ Machine, the 11-piece band at the center of the monthly gig, consistently plays to a buzzing, packed house. It’s been that way since the first time they performed. The band’s Jersey-accented drummer, Charlie Spataro (or “Freight Train” to those in the disco scene), originally contacted the West Gate to try to use the Lounge as a practice space. But Jimmy had a different idea. As Charlie tells it, Jimmy said, “‘Well, if you’re gonna do that, why don’t you come down on a Friday night and play, and we’ll open the doors and see what happens.’” That first night, they played to a crowd of 265 people.
“It was born out of necessity, like anything else, right?” Charlie says of the band’s genesis. Following the 2008 Financial Crisis, live musicians began losing gigs to cheaper performers, like DJs. But Charlie saw an opportunity. “It was my idea, I’m proud to say. I said, ‘Listen, you know what we need to do? We need to do something that, number one, people our own age wanna hear,’ because we weren’t in our teens when we started this thing. And number two, I said, ‘There’s gotta be a gimmick. There’s gotta be a shtick to it, because right now the regular old wedding band, party band thing ain’t selling.’”
The solution was undoubtedly a pivot, but it didn’t involve starting from scratch. “We’re sitting around saying ‘What do we do, what do we do?’ and I said, ‘You know what? Think about this for a minute. What happens when you do a wedding? You come out, you play a bunch of music. You’re dancing with the bride, you’re dancing with the groom. A few popular tunes, and then the last hour of the wedding is what? An entire hour of ’70s disco.’” Thus the ethos of the band was born: “I said, ‘Let’s put a band together that does the last hour of the wedding all the time.’”
In my two visits to Friday disco night, Dancin’ Machine has done just that. Even the bathroom is in last-hour mode. As I waited for the ladies’ room, a woman in a red cocktail dress with matching heels burst through the door and called down the line to the stalls. “Is everyone having a good time tonight?! I’m having a blast!” she said. She was met with a slew of enthusiastic “Yeahs!” and raves about the band—their music, their performance, their style. Joining in on the spirited bathroom chit-chat, one woman chimed in about how she thought the lead singer was sexy. “I love his eye makeup.”
A party that carries over into the bathroom is standard fare on these Fridays, but out on the dancefloor is where things are really happening. Dancers of varying skill levels fill the smoky floor. Some shuffle in place, some hustle like pros. A particularly talented couple is surrounded by onlookers clapping in rhythm, cheering them on. Two women in matching sequin rompers sip drinks off to the side, perhaps trying to catch the sexy singer’s smoky-eyed glance. A woman in a rainbow tie-dye jumpsuit with matching headband and six-inch platform heels breezily grooves beside her more reserved date. If people’s eyes aren’t on their partners, they’re on the band. Crowned by a disco ball, Dancin’ Machine crushes disco classics like “Get Down Tonight” and “September,” clad in sparkly outfits of their own.
The world immediately outside the Lounge’s door does not suggest that anything like this would be possible here. The town is small and residential, the Inn’s exterior is unassuming, the year sure ain’t 1978. The apparent impossibility of it all perfectly sets the stage for what’s to come. To enter the Lounge is to leave behind inane conventions that say disco, dramatic oil paintings, and incredible cheesecake clash. Disco night is a refuge from such ridiculousness.
Maddie McCann attended Nyack High School and is a recent graduate of Colorado College.