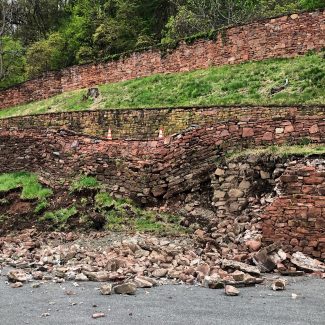 Since May of 2019, the lower parking lot at Nyack Beach has been closed to cars due to a collapsed wall supporting the drive downhill. Access to Nyack’s favorite riverside path–used for walking, cycling, dog walking, picnicking, and fishing–is now severely limited.
Although the gate downhill to the beach is locked, pedestrians and cyclists may still use the roadway to the Hudson River. A limited number of cars can park at the small plateau lot reached by turning uphill at the park entrance circle. The Park Commission also recommends parking at Rockland Lake Parking Lot #2 and walking down to the river.
Any of these three methods for accessing the beach is problematic. In the first case, unless you are a nearby resident, walking down the road  is a trek because the nearest place to park a car is on Locust Street, about ¾ mile from the beach.  To head down to the beach from the plateau parking lot requires an up and down walk along the Zig Zag Trail. Rockland Lake parking means an even longer walk to the beach, at a longer and steeper grade.
Riverside walkers have scrambled for other off-road alternatives. The best option is Memorial Park in downtown Nyack. But another off-road walking and cycling option, the Upper Nyack Riverhook Preserve, will open this year, albeit with winter-only, distant river views
Can walkers expect the road to get fixed soon? Jim Hall, Head of the Palisades Interstate Park Commission, said that an engineering firm is evaluating conditions, preparing specifications for repair. “Once we have those and a cost estimate, we will need to secure funds from the state and bid the project,” he said. “At a minimum the access road will remain closed for the rest of the year. At this point we do not know how long construction would take once it is awarded.” 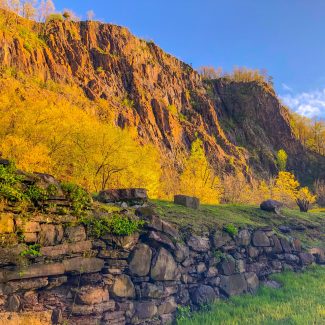 The plateau at Nyack Beach offers a sublime, quiet, dog-free (why?) walk on a flat surface above which the sheer-vertical Palisades soar. River views are limited by foliage in the summer. Wind and sound are masked by the Palisades, making for an especially quiet, meditative space. Despite its natural charm, the plateau is actually the product of extensive trap rock mining at the beginning of the 20th century. A huge operation was located at what is now Nyack Beach State Park. A notch was dynamited into the side of Hook Mountain, creating a flat working area from which more rock could easily be extracted. This level surface is now the plateau.
Rock was dynamited from the Palisades, moved by tram car to the edge of the plateau and crushed into smaller pieces. The crusher was powered by steam generated at a large building near the shore that later became the Nyack Beach bathhouse. Crushed rock flowed downhill through two tunnels that are still visible from below. At the end of the tunnels, elevated tracks carried loaded tram cars above a long dock. Rock was dumped into huge barges for a trip downriver to New York City. The hard rock was used in all kinds of construction, including buildings and roads.
People were horrified at the destruction of Hook Mountain. Sound pollution was also a problem due to daily dynamite explosions heard up and down the river. The Nyack Beach quarry was one of many along the Hudson River. One mile upriver at Slaughter’s Landing, where the Ice Train transported blocks of ice from Rockland Lake to waiting barges, another mining operation was underway. It had a similar pattern, with an elevated plateau later to become ball fields that are overgone and hard to find today. The Palisades were well on their way to becoming what High Tor in Haverstraw and Snake Hill in Valley Cottage have become: a shell of a mountain with one side looking normal and the entire other side of the mountain gone.
Fortunately, preservationists took up the cause and the Palisades Interstate Park Commission was formed, preserving the Palisades in New Jersey and from Nyack to Haverstraw. Nyack Beach became a state park in 1910 and mining ceased. 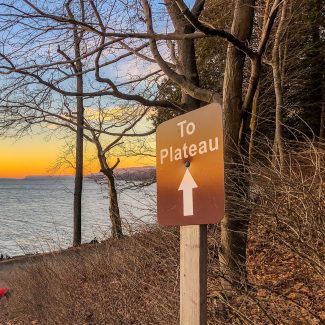 The half-mile long Zig Zag trail is a series of six switchbacks that lead from the plateau to the beach. The trail descends nearly 200 feet but the switchbacks mean that the grade is not huge. A bench along the way provides a break for the weary. The forest is nearly 100 years old here, and it shields the river from view.
Bird life is abundant and often the only sound is bird song. The marked trail starts from the asphalt road just below the plateau. The cement foundation of the stone crusher can be seen just below the road on the river side. Near its lower end, the trail divides with one arm heading to a small open space overlooking the collapsed wall with wide river views from the Mario Cuomo Bridge to the beach parking lot. The other path leads directly to the river trail just north of the parking lot.
The Zig Zag trail will soon become a part of the White Path, a connector trail from Nyack Beach to the blue-blazed Long Path heading up Hook Mountain. Currently, the white path follows several streets in Upper Nyack before connecting with the Long Path. The new white trail will go through land once owned by the Marydell Faith and Life Center. The New York-New Jersey Trail Alliance has begun work on the new trail. After completion in 2020, hikers can then make an off-road loop around and over Hook Mountain using Beach and Zig Zag trails.

Because the Nyack Beach trail is flat for its 1.5-mile length, just about everyone was able to enjoy its spellbinding views of the river and the Palisades. For many, it is the only way to experience the magic of the Hudson firsthand. It’s a temporary but nonetheless tragic loss.
See also:

Photo credits:  Photos by Mike Hays, video courtesy of Fire Mountain School
Michael Hays is a 30-year resident of the Nyacks. Hays grew up the son of a professor and nurse in Champaign, Illinois. He has recently retired from a long career in educational publishing with Prentice-Hall and McGraw-Hill. Hays is an avid cyclist, amateur historian and photographer, gardener, and dog walker. He has enjoyed more years than he cares to count with his beautiful companion, Bernie Richey. You can follow him on Instagram as UpperNyackMike.