by Mike Hays
Rivercliff is the third of Nyack People & Places’ Barons of Broadway series, tracing how Upper Nyack farmland was converted to large estates by the nouveau riche of the Gilded Age. The series looks at the estates along the Hudson River and the people who built them. 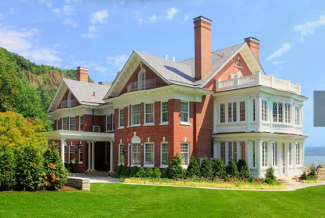 The 22-room Queen Anne Victorian mansion named Undercliff was built by Arthur Tucker in 1885, at 649 N. Broadway in Upper Nyack. It contained all the modern conveniences of its time but was declared obsolete and out of date in 1917 by its new owner, Colonel Benjamin Adriance. Adriance and his wife bought the property for its location overlooking the Hudson River and they had other ideas about what kind of house belonged there, tearing down Undercliff and building a large Neo-Georgian mansion that became known as Rivercliff.
Rivercliff has undergone multiple renovations over the years, including those by the entrepreneur and airplane designer Anthony Fokker, real estate magnate Irving Maidman, and several 21st century owners. But all the while it’s remained true to the design of the original Georgian mansion that the Colonel conceived 100 years ago. 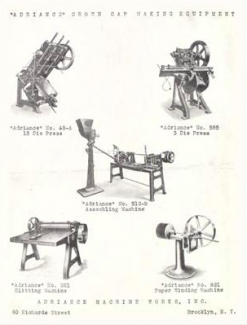 Products made by the Adriance Machine Works in Brooklyn.

Adriance was born in 1849 in Greenwich Village. As a boy, he served in the Navy during the Civil War and later was one of the first graduates of Cooper Union’s mechanical engineering course. After completing school, he consulted on the construction of the Brooklyn Bridge. In 1888, he started his own business in Brooklyn, the Adriance Machine Works, making automatic tin can and bottle capping machinery.
Adriance’s life took a U-turn when he romanced and then married Jean Bradbury after she divorced her first husband in South Dakota. Bradbury’s first husband sued Adriance for alienation of his wife’s affections, resulting in a bitter jury trial. In 1917, the couple bought the Tucker estate including the orchards west of Broadway and razed Undercliff. Their design choice, a classically balanced Georgian style with large windows, was quite a contrast to the asymmetrical, darker, Queen Anne style of Tucker’s Undercliff. They built a solarium with a marble fountain and placed an Odell pipe organ in the large central entrance hall.
Adriance died in 1919, during the new house’s construction. Jean Adriance would go on to live in the house, remarry, and become Jean Adriance Dole. She was an active member of Nyack society, including the Nyack Garden Club. She raised flowers, dogs, and purchased paintings, all the while running Adriance’s business and raising a son, Benjamin Adriance, who was born in 1913. Dole died in 1930. 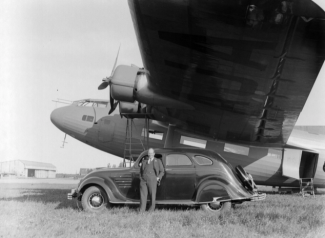 Anthony Fokker in the 1930s with one of his passenger planes

In 1937, Rivercliff was acquired by Anthony Herman Gerard Fokker, who gained fame and wealth as a Java-born Dutch airplane designer often known as the Flying Dutchman. His Fokker-model planes gave Germany an early edge in World War I. Manfred Von Richthofen, known as the Red Baron, flew a Fokker-designed plane. Fokker invented a synchronized gear that allowed a machine gun to be fired through the moving propeller, a design later copied by the Allies. Fokker went on to design and build planes in America. His designs for Douglas and Lockheed reaped him millions.
Fokker was an eccentric. He was known as a careless dresser and was known to go swimming without taking the time to disrobe. He was a sharp businessman who made a fortune but often appeared to doze off in business meetings. He was a photographer, filmmaker, dog lover, test pilot, and a boating enthusiast. He had an odd diet; his favorite meal was bouillon, two kinds of pie, four kinds of ice cream, and Dutch cocoa.
Fokker married twice. The first ended in divorce in 1923 and the second ended when his second wife jumped from a hotel window in New York City in 1928. As he said in his autobiography, “I have always understood airplanes better than women…I have learned, by bitter experience, in love one has to use one’s brain just as much as in business and perhaps even more.”

The Q.E.D, Fokker’s own design for a boat that was docked at Rivercliff.

Fokker purchased Rivercliff as a summer home because of its location on the Hudson River. He quickly began renovating the house. He opened up the front stairwell by removing Adriance’s pipe organ to create a two-story great room with a remarkable view of the Hudson River. He added a sun room on the south side and an enclosed sleeping room on the floor above it. He converted the billiard room into an air-conditioned theater. A large moose head in the billiard room swung to the side to reveal a screen. A planned swimming pool and hanger for his sea plane were never built.
Ultimately, Fokker would not complete all of his planned renovations of Rivercliff. After only two and a half years of living in Upper Nyack, Fokker contracted pneumonia and, after an illness of three weeks, died on December 23, 1939, at the age of 49.

In 1949, Irving Maidman acquired Rivercliff from Arthur Cornelius Koppell, a noted jeweler who along with his wife Emily Day, a singer with the Metropolitan Opera, had filled Rivercliff with antiques. Over time, Maidman hung paintings and object d’art in the expansive great room. On the walls of the wood-paneled library, Maidman hung numerous plaques and awards given to him for community and philanthropic efforts. Two servants and a gardener were required to care for the estate.  Maidman added a greenhouse to the estate where he grew orchids. “We like the mansion here pretty much,” said Maidman.
Maidman wasn’t a man for relaxation; he was always working on the next deal. He served in WWI and became a real estate broker after the war, losing his money in the depression. He started over in real estate by buying properties in Hell’s Kitchen, branching out into a string of off-beat properties and investments to become what one journalist called “the odds-and-ends man” of real estate. One of his theaters on W. 42nd street, the 198-seat off-Broadway Maidman Playhouse, was the first theater to be built in 30 years in the city. 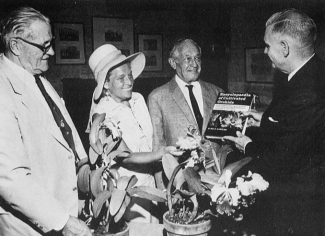 After moving to Upper Nyack, Maidman made quite a few deals in Rockland County. He owned approximately 1,000 acres, including, alongside Columbia University, much of Clausland Mountain. Columbia was intent on developing their Clausland property for real estate, but eventually backed down. Maidman sold 500 acres to Rockland County for $1.5M in 1969 for what would become a park and wildlife sanctuary, donating $100K to help the purchase.
That deal was just the beginning. Maidman bought ten railroad stations of the defunct passenger service on the West Shore Line, along with the abandoned train line that ran from Congers to Rockland Lake. He owned the West Side Airline Terminal from 1954 to 1972, which served as reservation and checkout counter for 10 airlines using Newark. He purchased a slaughterhouse and meatpacking business, a novitiate, a 1,000-acre estate in Poughkeepsie, factories in Edgewater, NJ, and several piers in Manhattan. He owned the 225-acre Spring Rock Country Club (Robyn Brook Country Club) and purchased the Tappan Zee Motor Inn for $1.8M in 1967.
Within Rockland, Maidman was a prominent charitable donor. He provided rent-free lodging for the Historical Society of Rockland County in a house he owned on Kings Highway. He was the founder of Rockland County Center for the Physically Handicapped at Camp Jowonio, New City and a founder of the Albert Einstein Medical School in the Bronx. He served on Nyack Hospital’s Board of Directors. Through fundraising, he helped lead the construction of the Congregation Sons of Israel Temple on North Broadway, where he was also Director. He was active in United Jewish Appeal.
In 1978, Maidman was struck by a car on Broadway Ave., and suffered traumatic injuries from which he never recovered. He died in 1979, having lived at Rivercliff for 30 years. 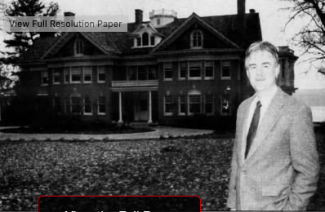 By the early 1990s, Dr. William Hardy, a research veterinarian with the Sloan Kettering Cancer Center, owned Rivercliff. Hardy discovered the first test for feline leukemia in 1972, and it became a prototype for the AIDS virus test used at the time. Hardy went on to develop AZT, the first effective treatment for AIDS. He lived with his son and a dog named Bear. Preservation of the estate took a lot of effort. Hardy’s son built a large stone terrace on the east side facing the river. Hardy loved the views. “Just looking at the river probably takes your blood pressure down 10 points,” he once said.
However, managing a large estate proved impractical. “It’s a lot more home than I need. It took everything we had financially to put it together,” he said. During the time it took to sell the estate, Rivercliff became the site of a number of fundraisers, most notably 1992’s Hudson River Designer Showcase. Over an entire month the house was open to the public with funds to benefit Nyack Hospital and Good Samaritan Hospital. Each of the 25 rooms was redone by individual artists and designers. The master bedroom, for instance, was redone as an 18th century folly, a garden fantasy in disrepair, by New York City designer David Barret. More than 10,000 people attended, including Arlen Dahl, Jonathan Demme, Michelle Pfeiffer, Gene Hackman, and the Nixons. A café was set up in the carriage house adjacent to the mansion.

Design plan by TMR Associates for the river facing side of Rivercliff.

According to current real estate records, Rivercliff sits on 3.25 acres and was last sold in 2014 for approximately $9M, containing 18 rooms, 9 bedrooms, 9 baths, 6 fireplaces, and no garage. Over the last five years, extensive renovations have been made, including enlarging the home’s atrium, renovating the third floor with a large balcony overlooking the Hudson, and adding an indoor pool wing visible from the Nyack Beach parking lot. A new brick and custom ironwork fence was constructed facing Broadway. Recently, the estate acquired a small adjoining riverfront parcel. The estate now is now approximately 22,000 sq. feet, sitting on four acres. While a garage is in the plans, it is not obvious in the final result.
Photo credits: Featured photo by Mike Hays, 649 N. Broadway from TKR Associates, William Hardy Jr from the Journal News, Maidman photo from South Mountain, Historical Society of Rockland County.
See Also: