by Dave Zornow
Village officials are saying it will be much better when it’s over. But until then, the rollout of Nyack’s new “Pay By Plate” parking meters has been as bumpy as the cratered moonscape that passes for Gedney Street.
The new system, which replaces the original ten year old munimeter hardware, will do away with the ubiquitous slips of paper that drivers have needed to place on their dashboard. There will also be an efficient and friendly smartphone app, called Flowbird,  where residents, visitors and businesses can pay for parking in a few taps, as well as extend parking time remotely.
The two unique aspects of Nyack parking — free parking from 6p-11p and 6a-11a as well as a “free 15” starting option — will be supported by the new system.
To make the transition easier, there’s are a couple of videos provided by Parkeon, the village’s parking tech vendor. And there’s a two sided post card which businesses and parking staff can give to the confused and confounded drivers who don’t know what to make of the new system.

Here’s the screen by screen process for using Pay By Plate munimeters. You can also check out the FAQ on Nyack-NY.gov covering the new equipment.

Step 1 — Enter your license plate number. (If you have a smart phone with a camera, you might want to take a picture of your license tag…for future reference) 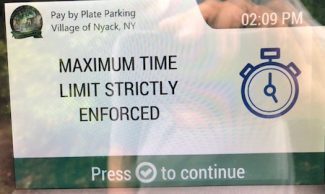 Step 2 — Receive a threatening message in all caps that serves no purpose. It’s not clear why this was included, unless Nyack is expecting an influx of visitors from Mars who aren’t familiar with what happens if you overstay your paid parking. 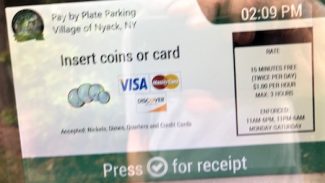 Step 3 — Pay by coin or with a credit card. Your paper cash is now trash — one of the failings of the old meters was how often the dollar bill reader jammed. The new meters eliminate that option.

Step 4 — A confirmation screen that lets you know how much time you have. THIS screen might be a good one to capture on your smart phone. Just in case…

The rollout has been bumpy. On new Meter Monday, there was no information on Nyack-NY.gov announcing the new program or alerting residents and businesses to the disruption required by removing the old munimeters and installing the new Pay By Plate hardware. On Tuesday, confused shoppers tried to buy time on newly installed meters that weren’t online and wouldn’t accept money; village officials said parking attendants wouldn’t be writing tickets, but that message wasn’t communicated to either parking attendants or people trying to park. Village officials say they have been in touch with local businesses over the last six months about the rollout; Chamber of Commerce President Roger Cohen says he doesn’t recall getting any communication in the last week announcing that the rollout would begin on Monday.

Nyack Mayor Don Hammond weekly Monday column on Nyack-NY.gov didn’t seem to be aware of the parking meter rollout, instead offering worthy praise to our “firefighters and emergency medical technitions.” (that’s a copy and paste). There was no mention of the new meters on the village website until Wednesday, although a push on the village’s Facebook page started getting the word out late Tuesday. However, that outreach still misses an obvious point: in a village where the majority of its businesses depend on traffic from across the county, North Jersey and New York City to be profitable, a message to subscribers of the village’s weekly This Week In Nyack email blast or a posting to Facebook or Nyack-NY.gov doesn’t effectively communicate changes to most of the people who need to know what’s changed.
Actually, as of Friday 7/12, there still hasn’t been an email blast to subscribers to Nyack-NY.gov talking about the new meters.
Next week should be better, as the remainder of the old meters are retired and the new Pay By Plate meters go online.
If the new meters make you moody, don’t blame the parking guys. They are in the dark as much as you are. They are just foot soldiers trying to do their jobs — which turn out to be surprisingly significant to the Village of Nyack’s annual budget.
Although Nyack is known for it’s shops and restaurants, the sales tax collected from local businesses contributes only about 2% of the annual revenue Nyack needs to operate, with New York State, Rockland County and Orangetown pocketing most of the sales tax. Judging their value against based on what each group means to the village’s bottom line, Nyack’s Parking Authority is more than five times more valuable than Nyack’s entire business district, with 2019-20 projected revenues from parking fees and fines totaling $535,000 compared to only $100,000 in estimated sales tax revenues to the village. If Nyack was a movie theatre, the parking guys would be the people behind the counter selling popcorn. Yes, you can live without the popcorn, in the same way you can walk two blocks away from Main Street or Broadway to find free parking. But for most people it’s a lot easier to buy the popcorn or pay the parking meter and then complain about it later on social media.

It’s not clear how the new meters will effect revenue because the new Flowbird app gives away 15 minutes free for every parking visit. Previously, “Free 15” parking was a separate transaction which didn’t directly impact paid parking instances.
The rollout has been bumpy and poorly handled by elected officials who usually hyper focus on parking related issues. Things will probably settle down in the next few weeks as people install the Flowbird parking app and get accustomed to the new system. What’s less clear is how the new technology will impact Nyack’s revenues for the remainder of this fiscal year.