Like the rest of New York State, Rockland County is no stranger to harmful invasive species. Some were imported deliberately—botanical specimens gone wild—and some accidentally, like critters that hitch a ride on shipments from overseas. In either case, these bugs and plants have no natural enemies here, and are often useless or even harmful to our local wildlife food chain.

Whether it’s a massive invasion by the Asian brown marmorated stinkbug or mile-a-minute vine crowding out native flora (and food for native pollinators) on our roadsides and parks, there are dedicated professionals and volunteers hard at work to protect the biodiversity of our local ecosystem.

Invaders from the East

The Eurasian-African water chestnut—Trapa natans—is NOT the crunchy veggie you’ll find on a Chinese restaurant menu. This version was imported to the U.S. in the mid-nineteenth century as an ornamental plant. But it escaped its horticultural bounds in the 1880s, when it was found growing wild in Collins Lake near Scotia, New York. It was soon recognized as an invasive pest without native predators to keep it in check, and is now found in 43 New York State counties. 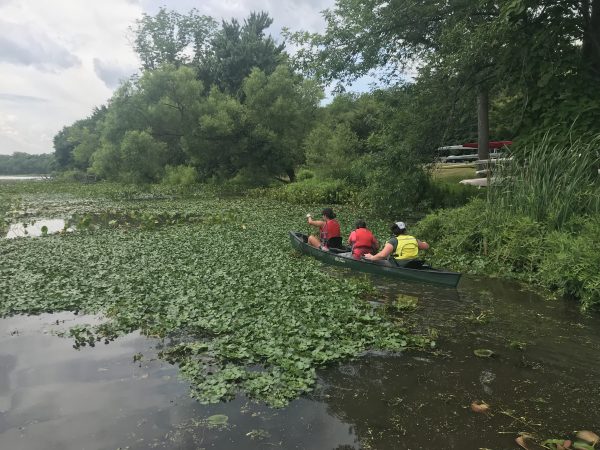 Water chestnut forms dense mats of foliage on the surface of ponds, lakes, and slow-moving streams and rivers—like the Hudson—and it’s so prolific that it can cover a small lake in a single season.  It spreads by clinging to floating objects, including recreational watercraft, the pads of boat trailers, and fishing equipment. Just put an “infected” watercraft or boat trailer into a new waterbody, and this invasive plant that multiplies like bunnies will put down roots and spread out.

And that’s not good for Rockland Lake–or any other waterbody–according to the N.Y. State Department of Environmental Conservation (NYS DEC). Besides making boating, fishing, or swimming impossible, water chestnut’s thick mats of roots and vegetation also shade out native aquatic plants that provide food and shelter to native fish, waterfowl, and insects. Decomposition of these mats reduces dissolved oxygen levels and may kill fish. And if you’ve ever stepped on a spiny water chestnut fruit while wading in a river or lake, you’re not likely to forget the painful puncture wound it left behind. 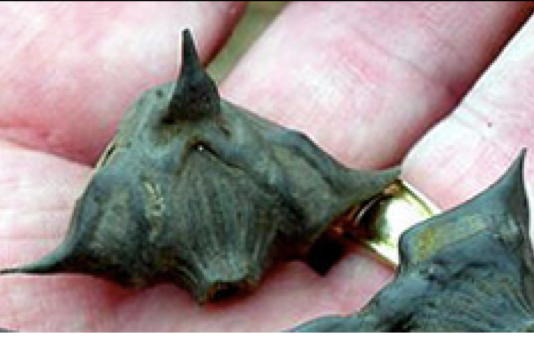 Rooting out the problem

Spearheading last week’s pull was DESP’s Natural Heritage Trust Water Resource Coordinator Irene Holak, who regretted that the project was shortened by bad weather. “We filled 167 bags on Wednesday which totaled about 4,100 pounds and covered just over an acre near the Parking Lot 6 dock and a small section across the lake (by Camp Venture) ,” Holak said.

Joining the effort were 12 DESP staff members, including the Aquatic STRIKE Team, along with six members of Lower Hudson PRISM, and six members of Rockland Lake’s own Rockland Rowing, a not-for-profit 501(c)3 community rowing organization with recreational and competitive programs for adults and youth, as well as adaptive programs for those with physical and cognitive challenges. 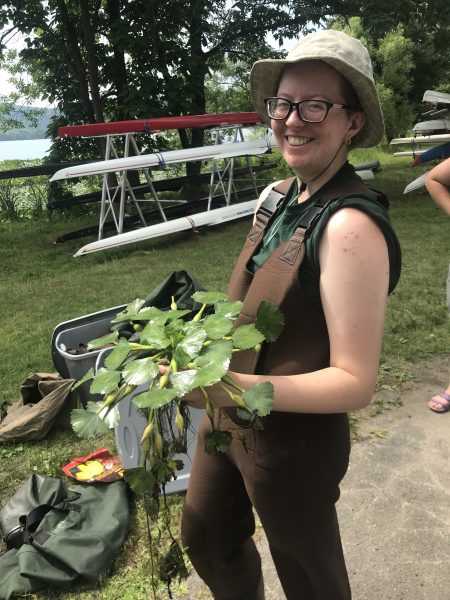 The Rockland Rowing volunteers were thoroughly trained by  DESP. “That team knows what to do now, and will work with the Park Manager to safely remove more water chestnut plants,” said Holak, who added that the goal is to gently pull the entire plant with its submerged roots up from the  lake bottom, before the seeds on the rosette start to mature and drop to the bottom.

You’d think that all that vegetative matter would be ideal for composting, but it’s not always so simple. “The nutlets stay viable, and if even just one gets into a waterbody, it may take root and spread.” said Holak. Lacking the sunny space to “solarize” the bags and kill the water chestnut seeds at Rockland Lake,  DESP and the Park Manager opted, in this case, to load the bags into trucks and dispose of them in a landfill.

As daily users of Rockland Lake, the people of Rockland Rowing are perhaps most impacted by the quality of the water. We are run by volunteers, so we know how important the concept of “many hands make light work” is and we have the type of group that likes to help out when we can

The Rockland Lake State Park project is expected to continue over the next ten years, in order to deplete the existing seed bank on the bottom of the lake. Pulls are most effective in June and July, when the nutlets are not yet ripe enough to create new plants. 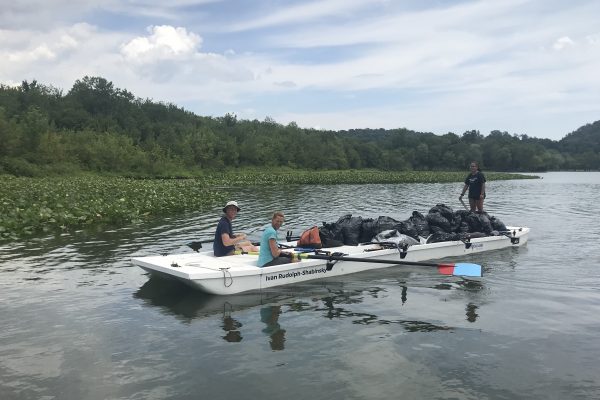 Rockland Rowing members pitch in at the water chestnut pull at Rockland Lake last week. Steering in the back is youth rower Nicole Simbana. Rowing in the bow are Ivan and Kathy Rudolph-Shabinsky. Photo courtesy NYS OPRHP Invasive Species Unit

“We’re partnering with Rockland Rowing and the Lower Hudson PRISM this year, and hope the rowing team will pull more bags this season,” Holak said. “We anticipate training and working with more volunteer groups in the coming years.” She emphasized that training is essential in order to remove the plant effectively, and dispose of it properly, to prevent the nutlets from infesting another waterbody. Safety is another portion of the training, especially educating volunteers on algal blooms that may be harmful while pulling.

If your group would like to be trained to participate in water chestnut pulls, reach out the DESP Water Quality Unit (Water.Quality@parks.ny.gov) or to the Invasive Species Unit via email to Matt Brincka (Matthew.Brincka@parks.ny.gov). The DESP will coordinate an event and work with the Park Manager at Rockland Lake State Park. You can also contact the Park Manager (Christian.Nielsen@parks.ny.gov) for information.

If you see water chestnut in another waterbody, take pictures and send a report to iMapInvasives.

You can do your part to prevent the spread of water chestnut and other aquatic invasive species by cleaning your watercraft and gear completely after removing it from a lake, river, or stream. 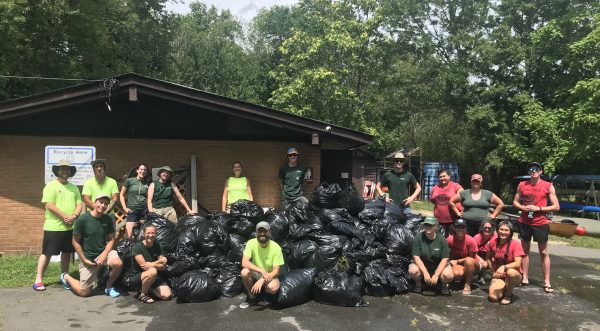