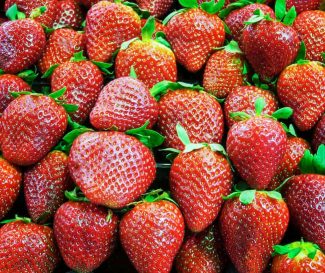 Imagine the aroma of millions of fresh strawberries. Fresh strawberries have always been a treat, but they were even more so in the days when they were the first fresh fruit of the year. In the pre-Civil War era, New York City was consuming some eight million baskets of strawberries in season. First steamboats, and then trains, were used to bring just-picked fruit from Rockland County to the city. On weeknights, strawberries were shipped on a special boat (the “strawberry boat”) and train line (the “strawberry train”) that ran during berry picking season. It became a competition. What strawberry transportation method would win out? 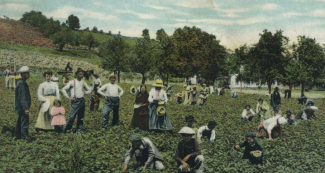 The North American wild strawberry was larger than the European alpine strawberry. It was later hybridized with a Chilean strawberry to become the modern strawberry. The scientific name for the American strawberry, Fragarai Virginiana, reflects its aroma and abundance in the coastal regions. By 1830, strawberries were being grown by farmers, the first fruit bred in America.
In Rockland County, strawberries quickly became a cash crop along with raspberries, apples. and pears. Aside from the vagaries of weather, one problem in growing strawberries is having the labor to pick the fruit. Fortunately, most farm families were large, and children could help out with the daily harvest. Fruit was packed in willow baskets that appear to have been larger than a pint, and perhaps closer to a quart.
Locally, the largest known strawberry farms were in Central Nyack, near the intersection of Waldron Avenue and Route 59 on the Waldron family farm. John Baker, a Civil War veteran, and the Nyack toll taker on the Old Nyack Turnpike (Route 59), also grew strawberries in Central Nyack. 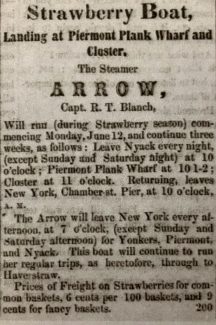 By the 1830s, steamships were providing ready access to New York City, and they were a convenient and relatively inexpensive way to get strawberries to city markets. The nightly runs of the strawberry boat began sometime in the 1840s. Farmers paid six cents per hundred baskets (nine cents for fancy baskets) to have berries shipped.
The strawberry boat, christened the Arrow, was built in 1838. It was some 200 feet long with a draft of four and a half feet. The boat was owned by the Smith brothers of Nyack (Isaac, Abram, Tunis, and David), who also controlled the Nyack docks. The Arrow had a habit of getting in accidents (as did many steamboats). On December 19, 1845, a fire of unknown origin started at night. Someone had the bright idea of casting off the boat from the pier and it drifted away from the arriving Orangetown firemen. Capt. Isaac Smith arrived, jumped on board the burning ship, and tossed mooring ropes back to firemen at the dock to pull the boat ashore. In 1851, it happened again in Nyack, with fire starting as the boiler was heated up for a morning run. Much of the boat was burned along with much of the adjoining lumber yard.
Like a phoenix, Arrow arose from the ashes, and in 1854 there were advertisements for the strawberry boat in local papers. The boat left New York City at 7p, stopping at Yonkers, Piermont, and Nyack. It was loaded with berries, and left Nyack at 10p, stopping soon after in Piermont. At 11, the strawberry boat left Closter Dock.

People thought the railroad could never compete with steamboats in the Hudson River Valley.  But after the trains came to Peekskill, for example, 80% of the people traveling to the city went by rail rather than steamboat, even though the cost was higher. Even cutting the steamboat price to half the rail fare didn’t draw people back to the boat. Trains quickly became the main avenue for people and produce.
In May, 1859, the Northern Railroad of New Jersey opened, providing rail service from Piermont to Secaucus. The Northern Railroad ran a Strawberry Train beginning on June 6 of each year during the berry season, leaving Piermont at 7:10p and arriving at Jersey City at 10:30p, returning the same night. The regular daytime trains, the 6a and 3.25p trains from Piermont, also carried berries. The cost was $1.50 per 1,000 baskets to NYC ($1.00 to Jersey City). Empty packages and baskets were returned free of charge.
In 1859, it was estimated that 192,648 baskets of strawberries left Tappantown station. Customers paid three to five cents for a basket. Local farmers netted the “handsome sum” of $4,000 on these berries, deducting costs for freight and a 10% commission to the market men who sold them. Other trains left from Suffern. In 1859, a train left with 16 cars full of strawberries, some 400,000 baskets on one train. Farmers also sold berries to other villages, and in other directions than New York City.

Even though the railroad didn’t arrive in Nyack until 1870, trains became the dominant way to ship berries. The boat trip was just as fast as the early trains, with trips being made overnight, but the cost differential was huge. In addition, train stations were closer to the farmers of Rockland, most of whom did not live near the Hudson River itself. By the Civil War era, the strawberry train was carrying many more berries.

During the days of strawberry farming, strawberry festivals were held throughout Nyack in June. The Methodist Episcopal Church held an annual strawberry festival with ice cream. In 1869, a strawberry festival and concert was held at the Wigwam, a grocery store and meeting hall located on S. Broadway, on three consecutive nights. Soda, strawberries, ice cream, and cakes were available, with purchases going to fund the church next door. There was music played by an extremely talented 10-year-old violinist, a choir, and a piano-forte.

With strawberries available year-round, we are a little more jaded today in how we think of the ubiquitous strawberry. Still, the aroma of local, fresh strawberries at the Nyack Farmer’s Market is special. In addition, the annual strawberry festival hosted the Palisades Presbyterian Church on June 11, 2019, features homemade shortcake, smoothies, and strawberries by the pint, along with music and games reminding of us of those long forgotten strawberry boats and trains.
When I mentioned to Myra Starr, Historical Society of the Nyacks trustee, that I was working on the strawberry train and boat, I was pleasantly surprised to learn that she had already done some research on the subject. My thanks to her for supplying some of the information contained in this article.