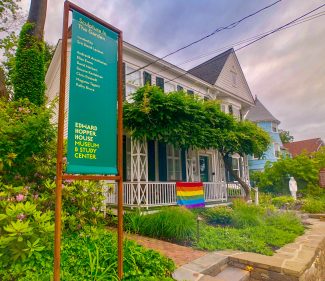 The contemporary sculptures nestled within the greenery of the Edward Hopper House gardens, curated by local sculptor Eric David Laxman, add a new dimension to our understanding of Edward Hopper. Laxman has chosen sculptures that elaborate on the theme of the current exhibition in the museum, Alastair Noble’s “Message in a Bo(a)ttle.”
The Edward Hopper House gardens provide the museum an opportunity to expand its offerings in the warmer months. As Ken Morris, President of the Edward Hopper House Board of Trustees, states: “All of our garden events and sculptures, as well as our exhibitions and programs, reflect the influence of Nyack on Hopper’s work, and equally important, Hopper’s enduring influence on the arts.”

As a sketch-happy 16-year-old cyclist and boat enthusiast, Edward Hopper found a bottle on the shores of the Hudson River with a message inside containing the names of two couples and a note to contact them. Hopper sent William Sanford of Brooklyn a letter. The museum has both the bottle Hopper found and the letter Sanford wrote back to Hopper. We learn that the foursome was sightseeing on the steamer Tolchester that went from New York City to West Point, Iona Island, and Poughkeepsie. They tossed the bottle as Peekskill was in sight. Sanford mentions that he will soon be “wheeling” from the city to Nyack, cycling being a booming activity at the time.
The message in a bottle is a perfect metaphor for understanding Hopper and his work. And Alastair Noble has coyly added the theme of boats, so important to the young Hopper.

Laxman has been curating sculptures at the Hopper House for a number of years, but this is the first time the sculptures in the garden have been coordinated with the exhibition inside. Laxman received a wide range of submissions for the show. He was able to visit many of their studios; others visited Laxman’s studio on Mountainview Avenue in Valley Cottage.

Eric David Laxman stands with his statue A Converstation in Six Parts, which was installed at Journal Square, Wednesday, July 8, 2009. Staff photo by Greg Lynch

Laxman curates a diverse sculptural display. Featured sculptors range from a young artist from Brooklyn to a woman who recently moved from Brazil to White Plains. A wide range of materials and ideas are used, from figurative boats to abstract waves, from metal to plastic to bamboo. Laxman has sited each piece in conjunction with the artist to take advantage of the garden’s foliage, but most of all to work with light and shadow so characteristic of Hopper’s work. The complexion of each piece and of the whole changes over the course of a day and whether it is sunny or cloudy. “Sculpture has so many ways to express ideas, to challenge people, to make them curious, and to make them ask about it,” says Laxman. The same can be said of Hopper’s paintings, whose meanings have challenged several generations of Americans.

The Sculptures in the Garden

Plan your Instagrammable moments at the Sculpture in the Garden exhibit through October 27, 2019 and let the sculptures resonate not only with the exhibit inside the museum, but also with an upcoming origami workshop and discussion, and with the on-site construction of a skin-on-frame kayak.

Eliza Evans, Artefactual, foam, heat shrink wrap, painted steel. The white heat shrink wrap that is used to winterize boats along the Hudson sets off these five dramatic, life size figures that can be seen from the street. Some people have asked when  the sculptures will be unwrapped. Artefactual demands that we find identity and meaning in the work that highlights the enigmatic question of a message in a bottle: What is contained in these white wrappers whose internal forms are only suggested? 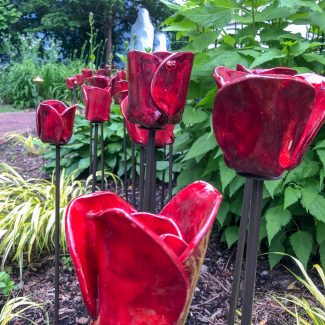 Simone Kestelman, Message in a Blossom, glazed ceramics and steel. Kestelman’s 85 red ceramic tulips, one for each year of Hopper’s life, are positioned as a river flowing through a landscape of hostas and grasses.  Kestelman highlights Jo Nivison’s artistic influence on her husband’s palette by choosing a dramatic red that is often found in his female painted figures. 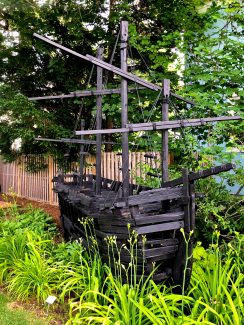 David Herbert, Yesterday’s Gone,wood, paint, hardware. Herbert riffs off Fleetwood Mac’s song, “Don’t Stop” in his dramatic recreation of a deconstructed sailing vessel complete with rigged masts and yardarms. The large ship blends into the landscape with a message of a lost past and an uncertain future as it sails through a sea of lilies. 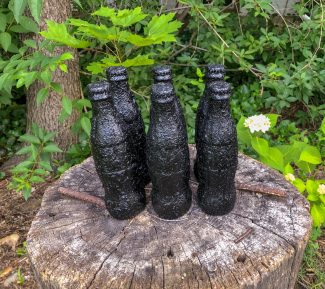 Andranik Aroutiounian, Message from the Past, weatherproof tar over glass coke bottles. Six unopened black-coated coke bottles are arranged atop a log pedestal. This small work positioned in an open space among flowers is a thematic pop-art cross between Warhol and Hopper’s Nighthawks 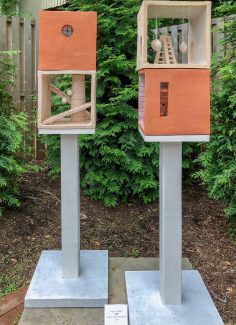 Megumu Tagami, sqft, ceramic and mixed media. Brooklyn artist Tagami places four ceramic boxes on white pedestals. The boxes are open on both ends with geometric “windows” on the other sides. Ladders and found Hudson River rocks from near her studio in Beacon populate the room. The sculptor invites us into the room from all four sides, adding meaning to the enigmatic objects within. 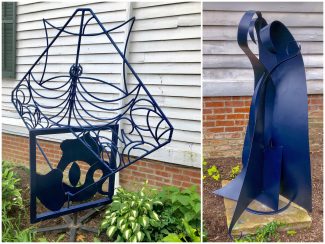 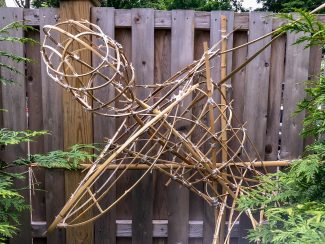 Kathy Bruce, River Naiad Searching for a Message in a Bottle, Bamboo planted with morning glories and moonflowers, continuous growth, green sculpture. Bruce’s site-specific bamboo sculpture is entwined through a row of arborvitae along a wooden fence on the south side of the garden. Accompanied by flowers that will bloom in the morning and evening later in the season, an open-structured river nymph emerges like a genie from a bottle.

Photo credits:  Photos by Mike Hays, Laxman photo by Greg Lynch
Michael Hays is a 30-year resident of the Nyacks. Hays grew up the son of a professor and nurse in Champaign, Illinois. He has recently retired from a long career in educational publishing with Prentice-Hall and McGraw-Hill. Hays is an avid cyclist, amateur historian and photographer, gardener, and dog walker. He has enjoyed more years than he cares to count with his beautiful companion, Bernie Richey. You can follow him on Instagram as UpperNyackMike.