Earth Matters focuses on conservation, sustainability, recycling and healthy living. This weekly series is brought to you by Maria Luisa Boutique and Strawtown Studio and Summer Play Camp at Blue Rock School.
If Earth Matters to you, sign up for our mailing list and get the next installment delivered right to your inbox.

The Village of Piermont’s Community Cleanup on May 4 was about more than removing trash. This year, resident Erica Lockwood brought her freshman and sophomore biology students from Eastchester High School to remove invasive plants along Piermont Pier.

Invasive species threaten the biodiversity and stability of an already established food web. They outcompete the native organisms and often don’t have predators. Human introduction (either intentional or accidental) is the main cause of this destruction. However, we can help in a small way by removing them when possible, to restore order.

Of these invaders, two of the most common (and harmful) are oriental bittersweet and Japanese honeysuckle. Anyone who has traveled along the New York State Thruway and other open roads has most likely seen these species wrapped around trees and just about anything else they can cling to and climb up.

Oriental bittersweet is especially harmful to our local ecosystem because: 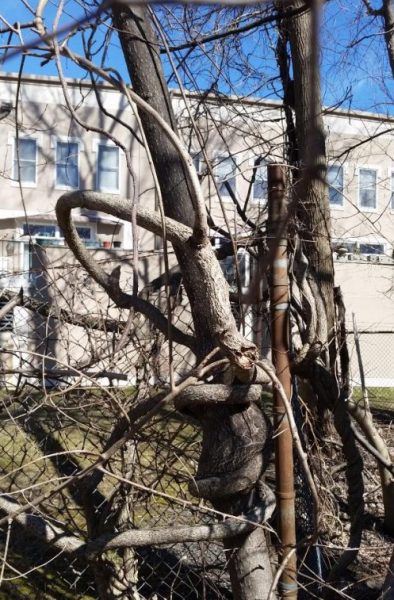 You can identify oriental bittersweet in several ways:

Chemical or bio-agents are not needed to control oriental bittersweet.  A best practice is to cut the vine twice, once low to the ground and once shoulder or chest height. This is done for three reasons: first, so the area under the tree looks neat; second, so you can see from a distance the vines were cut; and third, so that regrowth, if it happens at all, is detected easily and controlled quickly.

As tempting as it may be, vines should not be pulled down. Pulling them damages the native tree, and you never know what might come down with them–think a large, dead branch. If you have the time and energy, pull up as much of the underlying roots as possible. But be warned that bittersweet’s roots can travel several yards. 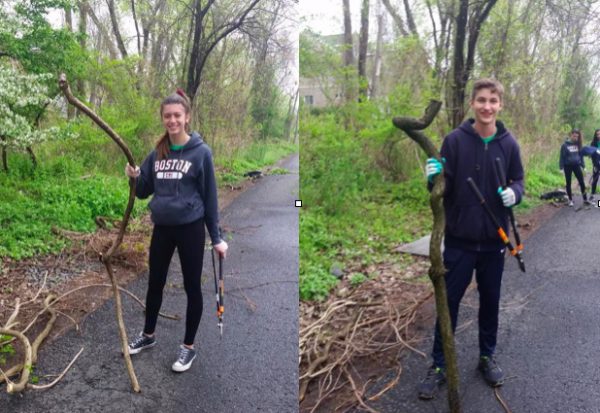 Oriental bittersweet was no match for these students. Photo: Glenn Sungela

Japanese honeysuckle also harms native vegetation by taking over and crowding out native plants. It, too, can be identified in several ways. The woody vine runs on the ground until it finds something to climb up and twine. Its leaves are opposite one another, small, simple, and usually smooth-edged. When it blooms, the flowers are usually white, or sometimes yellow.  As they thicken, the light-green colored stems become shreddy.

Best practices for controlling Japanese honeysuckle are the same as for oriental bittersweet: Cut twice, once low and once high, pull out as much of the root system as possible, and monitor for potential regrowth. But do not pull the leftover vines from the native plant. They, too, will eventually wither away and fall to the ground on their own.

Erica Lockwood’s Eastchester High School students’ work added to a segment of the Pier adopted by Glenn Sungela in collaboration with Dan Sherman, Chairman of the Piermont Parks Commission, Piermont’s Commissioner of Parks, and with support by the Village Mayor and Board of Trustees. The segment starts at the beginning of the Pier and extends 100 feet on the north side of Ferry Road toward the Hudson River. Chairman Sherman also cleared invasive plants along the Pier, concentrating on the path to the dog run.

The Piermont Pier is a heavily used access point to the Hudson River, enjoyed by locals and visitors from sunup to sundown. But the invasive vines on the ferry road are out of control in what should be a wooded riverside park.

This removal program makes a meaningful difference and is appreciated by the village. The noticeable impact is the physical cleanup of the ferry road’s woodland landscape. Less noticeable, but also important, is the awareness that the program brings to Village Board, the community, and visitors, of the effort being made to battle invasive plants—a battle that will take continued vigilance. 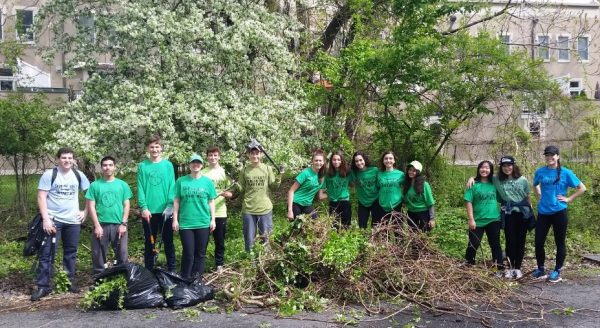 Students standing behind the fruits of their labors. Their shirts read “Save the Earth. It’s the only planet with (pizza, chocolate tacos, coffee)”. Photo: Glenn Sungela