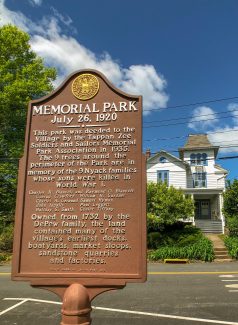 This Memorial Day, pack a picnic and discover the numerous memorials in Nyack’s Memorial Park. The village’s first open space park was created to commemorate those lost in WWI. Over time the park has expanded and now includes memorials to many whose signature on village life is timeless.

The land before the park

The 72-acre Depew farm, fronting the Hudson River, in Nyack, had been in family hands since 1732. In 1854, the Depew family built a large Italianate house called the Hudson House that still stands on Piermont Avenue across from the park. The Depew farm was sold in chunks and was developed to form the business blocks on S. Broadway, the Post Office, and the Nyack Library. The Depews maintained a commercial greenhouse in what is now the upper part of Memorial Park. At one time, 18,000 rose bushes were cut every morning for ten months out of the year. The flowers, along with those grown at numerous other Nyack greenhouses, made their way downriver to New York City. 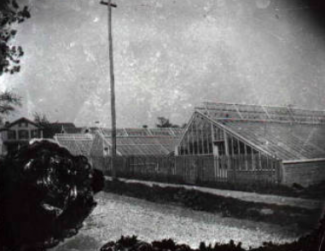 The Depew greenhouses along Piermont Ave. In the background on the left is a house that still stands at the corner of Depew and Piermont Aves. Photo Courtesy of the Nyack Library.

Rock was once quarried along the Nyack Brook on the south side of the Depew property. A grist mill was built along the brook that was rebuilt in the 1800s as a sulfur match factory that hired and exploited young children as workers. By 1850, Storms’ Steam Tub and Pail, a woodenware factory, replaced the match factory, complete with its own wharf. This factory closed in 1877 and became Grant’s Flock Mill, popularly known as “the shoddy mill”; it made woolen yarn produced by tearing old woolen rags into strands to make a cloth known as “shoddy.”

Formation of the park

The war to end all wars took many lives. In Nyack, nine boys lost their lives during the brief, fierce fighting at the end of the war. The idea for a memorial park was the brainchild of John Dunlop, Nyack Mayor James Pacey, and Supreme Court Justice Arthur. S. Thompkins. Many other well-known villagers were active in its inception, including pharmacist Daniel Shea, President of Nyack National Bank Augustin Voorhis, Mayor Theodore O’Dell, Mrs. Natalie Couch Williams, and businessman John Dailey. 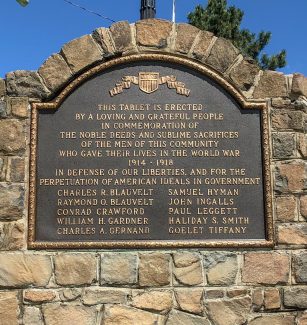 The Soldiers and Sailors Memorial Park Association was formed to solicit donations, to purchase the land, and volunteers, to get the park ready.  Originally, the idea was to build a large community center on the site. While that never happened, the Charles R. and Raymond O. Blauvelt (brothers lost in the war) Post American Legion was built just south of the Nyack Brook, on land deeded to them by the association.
Money was easily raised for the park, given the patriotic mood of the day and the land was purchased on July 26, 1920.The landscape was very different in those days, with the factory and greenhouses on the upper level. The lower level was small; during storms, it was covered in water.
Volunteers showed up to raze the old mill and to landscape the park. It took months. Daniel Shea remembers merchants heading down to the park after work to help hammer and clean bricks. The greenhouses were easier to remove.
The Garden Club of Nyack handled the landscaping, including the border of nine trees in memory of the nine men lost (the Blauvelt brothers, Conrad Crawford, William Gardner, Charles Gernand, Samuel Hyman, John Ingalls, Goelet Tiffany, and Paul Legget). Over time, a number of trees have been lost in storms and replaced.

Eventually, dues-paying declined among the club, until only three subscribers were left. In 1935, the association deeded the land to the Village of Nyack. A small playground, playhouse, and ball field took up the space. The playground was overseen by the Women’s Civic League of Nyack with attendance in the hundreds every day. In time, the league dissolved and the Youth Recreation and Parks Commission of Nyack assumed control. For a period of a few years, starting in 1960, one of the finest skating rinks in the county was installed near the brook. 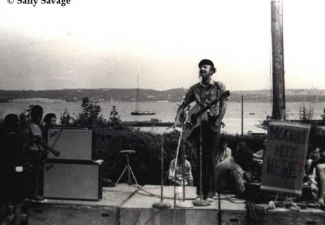 Sally Savage photo of Pete seeger concert at Memorial Park in the 1960s (Courtesy of the Nyack Library.)

When the Tappan Zee Bridge was built, when John Kilby served as mayor, the lower park was expanded into the river with fill. Concrete barges donated from the NY Trap Rock Corporation and Construction Aggregates were used to mark the eastern boundary of the park to create a six-acre addition. Fill was primarily from the old Route 9W roadway that was destroyed while the new bridge was built. However, there was not enough fill to complete the project, which is why we still see the remains of one of the sunken concrete barges today. The 1955 project became known as Kilby’s folly.

The park has seen many proposals for change come and go over time, some rather drastic, such as a proposal in the early 1960s for a 99-year lease of the northern part of the park for a four-story motel with a glass façade facing the river. The Village of Nyack Parks Commission provides oversight of the park and the abutting marina. In 2005, the non-profit Nyack Park Conservancy was formed by concerned citizens. Through donations, the group has enabled the village to create new basketball courts, the Nyack skate park, a butterfly garden, and a state-of-the-art zero depth children’ splash pad.

Memorials on the upper level 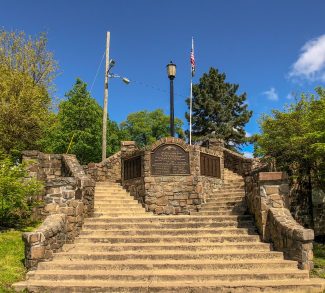 In 1926, a memorial designed by Marshall and Henry Emery linked the upper level of the park and the lower level with a split staircase and a bronze plaque commemorating 423 Nyack residents who served in the Army, Navy, Coast Guard, Red Cross, YMCA, Salvation Army, and the students of the Army Training Corps. At the time it was the only way to access the lower level, so everyone had to pass by the plaques. Subsequent additions to the park, including a sloping lawn and car access via Hudson Avenue, have left the monument oddly alone beneath a tall flagpole.

Bench by the Road

Near the WWI Veteran’s Memorial is the Bench by the Road, commemorating the work of a freed slave, entrepreneur, and landowner, Cynthia Hesdra, who opened her house as a way station on the Underground Railroad. Dedicated on May 18, 2015 by Nobel Prize-winning writer Toni Morrison, the bench, one of many in the US, was completed under the guidance of local resident (and Nyack News & Views writer) Bill Batson. The bench offers a long-range view over the old cliff edge, looking southeast toward the Mario Cuomo Bridge. 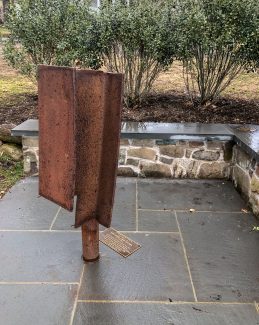 A mounted piece of one of the World Trade Center towers memorializes Crowther, who lost his life saving others’. Known as the Man in the Red Bandanna, Welles Crowther from Upper Nyack, is an inspiration to us all. The memorial was erected in 2017 as an Eagle Scout project by Christopher Walsh of Troop 2 Nyack.

Memorials on the lower level

Near the end of the Nyack Brook rests an in-situ boulder memorial to Rex Louie Bernstein, a native of Nyack who died suddenly in 2015 as a senior at Wesleyan College. Apparently, this was a favorite place he liked to go with his dog. The serene location is set off by a series of tastefully arranged boulders and begs for a moment of meditation and remembrance. 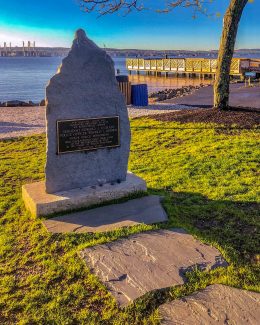 A granite stele near the gazebo is marked with a bronze plaque to commemorate the heroism and valor of two Nyack policemen who were killed at Thruway Exit 11 in the infamous 1981 Brinks Bank robbery.

An anonymous and much-needed gift of $20,000 in 2013 funded new playground equipment in the memory of Jimmy Van Heusen. Van Heusen was born in New York State, and has no known relationship to Nyack. But many have been delighted by his Oscar- and Tony-winning songs. 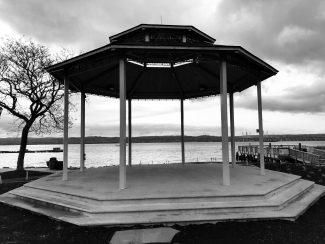 The gazebo has settled into a new location on the southeast side of the park, near the bridge viewing pier. The Memorial Park Gazebo was a gift to the Village of Nyack on July 4, 1991 by the Friends of the Nyacks, in memory of Marion Carpenter, a resident who was active in civic organizations and an ecology and gardening teacher at Wave Hill. The architect was Robert Wisner and the landscape is kept by the Nyack Garden Club, which also manages the nearby butterfly garden.

Nyack’s Memorial Park has a rich history, and for its size commemorates a wide range of people and events in our history. We should give thanks not only on Memorial Day, but on all days.
Photo Credits:  Depew greenhouse courtesy of the Nyack Library, Pete Seeger copyright Sally Savage courtesy of the Nyack Library, other photos by Mike Hays.
Michael Hays is a 30-year resident of the Nyacks. Hays grew up the son of a professor and nurse in Champaign, Illinois. He has recently retired from a long career in educational publishing with Prentice-Hall and McGraw-Hill. Hays is an avid cyclist, amateur historian and photographer, gardener, and dog walker. He has enjoyed more years than he cares to count with his beautiful companion, Bernie Richey. You can follow him on Instagram as UpperNyackMike.