by Mike Hays
Undercliff is the second the Nyack People & Places’ Barons of Broadway series tracing how Upper Nyack farmland was converted to large estates by the nouveau riche of the Gilded Age. The series looks at the estates along the Hudson River and the people who built them. The first edition focused on Larchdell, built by Colonel Alexander Pollock in the 1880s.

Undercliff viewed the northeast looking back to Hook Mountain. Note the terraced lawn.

Undercliff, built in 1885 by Arthur C. Tucker, was a riverfront Victorian confection designed for entertaining and leisure. The 22-room home was equipped with a 65-foot octagonal tower and a kitchen with a stove capable of cooking for 200 people. It stood at 649 N. Broadway in U. Nyack, and lasted but one generation before it was torn down to make way for a new mansion.

Arthur C. Tucker moved to Nyack from New York City, married, became a commercial rose grower on his large estate, and was a powerful voice in local politics and member of society. He first appears in Nyack news when he married a woman named Estella at what’s been described as his “flower-bedecked mansion” at the corner of Broadway and Voorhis Avenue, in South Nyack. A special morning train brought 150 guests from the city for the wedding.
Tucker acquired the northern part of Harmon Snedeker’s farm neighboring Larchdell in Upper Nyack. Tucker owned the latest photographic equipment and, with the help of local photographer L.M. van Wagner, made photographs of the building site just east of Broadway. The house budget was $25,000 at a time when the average salary was between $200-400 per year.
Tucker’s source of income, aside from what he might’ve inherited, came from growing roses in greenhouses built along Midland Avenue at the top of his property. Tucker’s greenhouse was one of many in Nyack at the time. Growers focused on roses for the NYC market.

Ironically, mansions seem to have been built faster in the Gilded Age than now. Undercliff, designed by William H. Smith, was built and landscaped in less than a year. Undercliff (or “Underclyffe,” as it was sometimes spelled) was named because of its proximity beneath the towering south face of Hook Mountain.
On the first floor, a dining room faced east with a view of the river. On the south side of the dining room was a billiard room with an adjoining private office. A parlor with a mantel of cherry and mirror of French plate beveled glass and a library completed the first floor.
The bedrooms, some finished in mahogany, and the butler’s pantry, were on the second floor. Servants’ quarters and storage were located in the top floor. The house was lit with gas using electric starters. Water came from artisanal wells on the farmland.
A large piazza overlooked a terraced lawn descending to a dock at the edge of the Hudson River. A large stable and carriage house were built with a similar design as the house. Granite columns flanked the semi-circular crushed stone driveway. An ornate fence fronted Broadway, which was lined with rows of larch trees that turned a brilliant shade of gold in the fall.

The gas-lit dining room of Undercliff

The Tuckers were quite the Nyack socialites during their summer visits to Undercliff. Like many barons of Broadway, they wintered in the city. They made the rounds of frequent parties as members of the Nyack Country Club, Nyack Rowing Association, and other groups. They often hosted the Nyack Married Club at Undercliff. About twenty couples would gather for an evening of cards and refreshments.

Arthur Tucker was the second longest serving mayor of Upper Nyack. From 1894-1911, he served as Upper Nyack’s fourth “president” (a term used instead of mayor until 1937). His term was mostly without major conflicts, with the exception of decisions made about a trolley line.

1890s photo of a sleigh in front of Undercliff. Building on right may be the carriage house.

Nyack villagers were keen on joining the list of towns with electric trolley lines. S. Nyack and Nyack had already granted licenses to a trolley line when the matter came up before a crowded U. Nyack village board meeting chaired by Tucker in 1897. NIMBYists argued it was against business interest. Some opposed placing the trolley on N. Broadway, suggesting that a trolley running north/south between Broadway and Midland would be a better choice.
After much debate, Tucker called a private executive board meeting. Behind closed doors, a license was approved with the Nyack Traction Company. The trolley line was never built despite approval from the three villages. 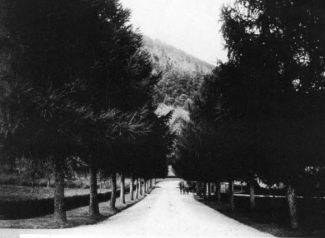 Larches on Broadway where it intersects with Larchdale Avenue. Undercliff is just to the right, Hook Mountain is in the distance.

In 1886, Tucker and his next-door neighbor, Alexander Pollock at Larchdell, built a street between Midland Avenue and Broadway on their property. The only other connection between the two avenues between Old Mountain Road and Hook Mountain was Lexow Avenue. Tucker and Pollock agreed to give the street to the village but only if Midland was properly graded. Water from Midland flowed down the new lane gullying the new road. Pollock and Tucker put in 700 feet of piping to prevent a recurrence and threatened to fence off the lane if further work on Midland was not completed by the town. Eventually the lane was opened for horse and carriage traffic. Over time, the name of the street was changed to what it is today, Larchdale Avenue, further altering the memory of the two elegant homes fronting the lane.

A fire at Undercliff farm and a lawsuit

In July 1895, during Tucker’s first term as President of U. Nyack, a barn near Tucker’s greenhouses on Midland Avenue was struck by lightning. The barn, including four tons of hay and oats, a sleigh, garden implements, and a worker’s furniture were lost to fire. Another nearby house was charred. The alarm was tolled, and fire trucks showed up. Though not Empire Hook & Ladder’s pumper, which was recalled by Fire Chief Haines, who later said his men couldn’t pull the engine up the steep road and that the barn couldn’t be saved anyway.

Tucker brought charges of incompetency against Haines at a Village Board meeting with R. Dickinson Jewett, the town attorney, present for interrogation. Tucker claimed that there was a large reservoir nearby on Pollock’s property that could have been used to fight the fire if a pumper had been there. In fact, he had sent a team of horses down Broadway to get the engine but was told the engine had already turned back. Haines defended his response. The Town Board found that Haines violated fire company laws, but should not be fired.

In 1900, Tucker and his new neighbor at Larchdell, James P. McQuaide, brought suit against the Mack Paving Company at a quarry next to their property where Nyack Beach State Park is now located, claiming physical discomfort and property damage from the dynamiting of the cliffs to make trap rock. Judge Dickey ruled on the case, saying it could not be decided on physical discomfort alone, but rather on the basis of physical injury to person or property. The judge allowed operations to continue. Village life during warm weather months would be interrupted for the next 11 years by dynamite blasts.

The end of Undercliff

Arthur Tucker became seriously ill and resigned as president of U. Nyack in 1911. He died after a long and painful illness in 1917 at a home he owned in Pelham. The new owner of the estate had a different vision for the house, and replaced Tucker’s Victorian confection with a Georgian mansion that still stands. The story of the changes Colonel Benjamin Adriance and airplane designer Anthony Fokker brought to 649 Broadway will appear in the next installment of Barons of Broadway.
Photo  credits: Photo of 649 n. Broadway in 2019 by Mike Hays, Undercliff photos courtesy of the Nyack Library.