Earth Matters focuses on conservation, sustainability, recycling and healthy living. This weekly series is brought to you by Maria Luisa Boutique and Strawtown Studio and Summer Play Camp at Blue Rock School and Dying To Bloom, a natural burial boutique for humans and pets.
If Earth Matters to you, sign up for our mailing list and get the next installment delivered right to your inbox.
by Daniel Wolff
Sparkill Creek may be the most polluted tributary in the Hudson River Valley. The evidence of raw sewage infiltration has been described as “chronic and severe,” with peaks that microbiologist Andrew Juhl of Columbia’s Lamont-Doherty calls “extremely high.” New York State has listed the lower creek as among its most impaired.
The problem has been known for decades–a 1992 Village of Piermont study describes sewer lines that “periodically stink and overflow”–but there’s little sign the creek’s getting cleaner. How do we change that?
Sparkill Creek is a relatively small body of water. It starts on the west-facing side of the Palisades above Blauvelt and Orangeburg, winds its way down into the valley along Route 303, then drains south through residential neighborhoods and industrial parks to Tappan. There it bisects the center of town and is joined by waters from the Northvale section of northern New Jersey, till it pours out through a gap in the Palisades into Piermont Marsh and the Hudson.
In all, it runs about eight miles. Beneath and around it are some 300 miles of sewer lines.
On average, the sewers date from the mid-1950’s. Also in the creek’s watershed are two waste treatment plants, one run by the town, one by the county, both emptying off Piermont Pier. Together, they release some 14 to 17 billion gallons of wastewater a year. According to New York State’s Department of Environmental Conservation, “Potential sources of contamination include failing septic systems, leaky sewers, improper sewage treatment, pump station malfunctions during rain events, and runoff.”
Since 2011, a citizens group, the Sparkill Creek Watershed Alliance, has been testing the water with the help of the environmental organization, Riverkeeper. They’ve taken almost 650 samples to determine the creek’s enterococcus count: a bacterial indicator signaling how much raw sewage may end up in the creek. The EPA threshold for swimmable water is 60 enterococcus cells per 100 milliliters of water; Sparkill’s count in dry weather averages 433. When it rains, the average jumps to 1266, and peaks can reach 24,000 and beyond. 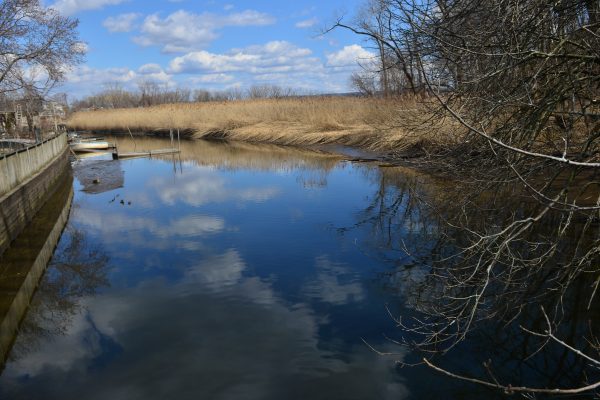 These results are nearly twice as bad as the already bad Bronx River and Saw Mill River. Only 6% of the Sparkill samples have ever met the EPA guideline. High counts not only up the risk of chronic diarrhea and stomach disease but provide a preferred breeding ground for mosquitoes carrying West Nile and encephalitis.
Well-meaning people are trying to fix the creek. Riverkeeper has been publishing data since 2011. The Watershed Alliance has been taking samples, picking up garbage, informing their neighbors, and meeting with Orangetown officials. The Town of Orangetown has identified lower Sparkill Creek as a watershed “of particular concern.”
But the concern only seems to go so far. Requested by the EPA to inspect some 90 storm sewers, pipes, and other discharges that feed into the creek request, the town’s recent reports found no indicators of pollution, and the inspector(s) didn’t see discharge, smell sewage, or take any samples. All the outfalls were checked off as “unlikely” to be polluting. Despite widespread evidence of chronic polluting.
To a layman walking the creek, the signs seem clear. Walk behind the graves of Revolutionary War veterans in Clausland Cemetery, off Route 303, and you can’t miss a sheen that looks like petroleum in the creek’s still backwaters. Stand on a bridge in Tappan, and the creek water where mallard ducks feed is an unhealthy gray. It’s an even more dramatic green near the Rockleigh golf course in New Jersey. But much of the pollution is invisible. 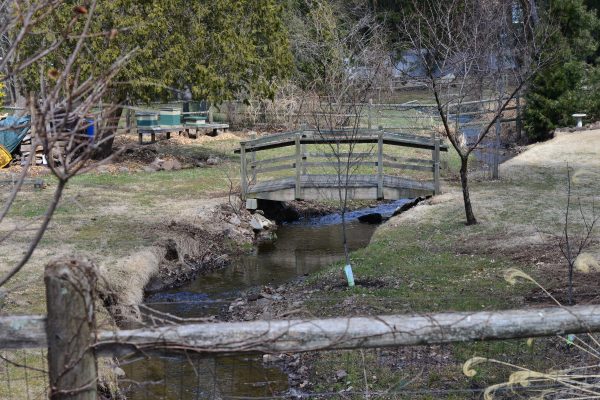 The problem’s complicated. Water sampling doesn’t identify where the system is failing. Larry Vail, recent head of the Watershed Alliance, compares bacterial testing to “feeling around with a baseball bat for a dime.” Finding the source of pollution through dye-testing and scoping sewage lines is expensive; never mind repairs. Periodic floods contribute to the creek’s pollution. So does erosion. Former Orangetown supervisor Andy Stewart lauds projects that lessen run-off, like the Homes for Heroes Green Infrastructure at the former Camp Shanks; “We need a hundred of them.”
We also need dollars. And those will only follow if we make our voices heard. The state’s Clean Water Infrastructure Act of 2017 earmarked $2.5 billion to address this long-running shame; the 2019 budget includes another $500 million. While a fraction of this funding has trickled into Rockland, much more is needed. Our local communities need to unite and call for a comprehensive approach to the entire watershed. Until we move from testing to action, Sparkill Creek will remain a health threat cutting through our neighborhoods, tainting backyards, playgrounds, marsh, and river.

Daniel Wolff is an Upper Nyack resident, author of a number of books, president of the board of the Legal Aid Society of Rockland County, and member of the Village of Upper Nyack Green Committee.”