Earth Matters focuses on conservation, sustainability, recycling and healthy living. This weekly series is brought to you by Maria Luisa Boutique and Strawtown Studio and Summer Play Camp at Blue Rock School and Dying To Bloom, a natural burial boutique for humans and pets.
If Earth Matters to you, sign up for our mailing list and get the next installment delivered right to your inbox.
by Susan Hellauer

Back in the early 1960s, girls at Upper Nyack’s Camp Marydell (now the Marydell Faith and Life Center) were warned by the nuns, in tones usually reserved for copperhead snakes and mortal sin, not to get even one tiny drop of Hudson River water on our skin. The dire consequences were left to the imagination; we pictured chemical burns and amputation, followed by an agonizing death. The sight and smell of the water, as we hiked or picnicked nearby, did nothing to lessen our fears.

An extreme drought in the 1960s had lowered water levels in the river, making the chemical and sewage pollution even more obvious. This, combined with the massive fish kills caused by the startup of the first Indian Point nuclear reactor in 1962, kickstarted a movement to clean up the dying Hudson, and helped spawn the modern American environmental movement in the process.

Part of that Hudson River cleanup included grants from New York State’s 1965 Pure Waters Bond Act to build sewage treatment plants in riverside municipalities. The Orangetown Wastewater Treatment plant, which came online in 1968, necessitated a change from a sewer system that routed stormwater and sewage straight to the Hudson, to a sanitary sewer system, in which sewage is separated from stormwater and thoroughly treated before being returned to the river. 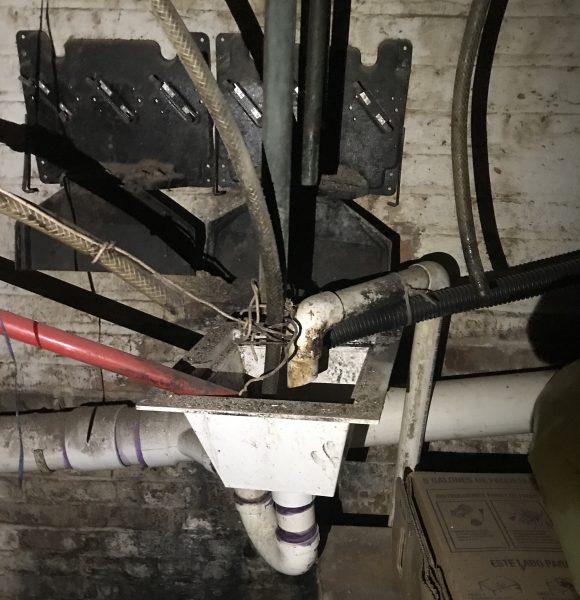 Nyack basement sink with several lines going into it. Some were condensate lines not a problem), and one was a sump pump discharging into the sink (not okay). This is an example of how some residents and business owners have connected ground or storm water to the sewer system. Photo: Dylan Hofsiss

But the legacy of that old system still remains, hiding in plain sight in Nyack. Old or other incorrect hookups of sump pumps and downspouts (along with leaks from aging pipes) route stormwater into the sanitary sewer system, overwhelming it during long or intense rainstorms. Pumping stations, where sewage is mechanically pumped “uphill” to the Orangeburg treatment plant, are the weak spots vulnerable to these sanitary sewer overflows (SSO), which can also be caused by mechanical failure or blockage with grease and those “flushable” wipes.

SSOs at the pumping station at the foot of Nyack’s Burd Street flowed unseen for decades into the Hudson River through an outfall pipe. But that pipe was capped in 2018 by order of the New York State Department of Environmental Conservation (NYSDEC). Since then, sewage overflows have bubbled up through a nearby manhole, flowing straight into the Hudson River anyway. Now, under a consent agreement with the NYSDEC to prevent raw sewage from flowing into the Hudson River, Orangetown’s environmental engineers are on a mission to find every incorrect sewer hookup, and a building-by-building survey of the town is underway.

For what to expect when they knock on your door, Earth Matters spoke to Orangetown Public Heath Engineer Dylan Hofsiss, who is spearheading the survey effort.

EM: When did your door-to-door effort to find incorrect sewer hookups begin, and did the environmental near-disaster at a business in Nyack on Main Street last January influence this project?

DH: We began our inspections of commercial properties in December of 2018. We had already found numerous illicit connections prior to the oil dump in January. It was actually one of the business owners who we had previously done an inspection with who called our department to complain about fuel odors emanating from sewer lines.

What exactly are you all looking for when you knock on a door?

When one of our inspectors knocks on your door, they are solely there to inspect your sewer line connections in the basement and roof leader connections on the perimeter of your house. They are looking to make sure there are no sump pumps directly connected to the sanitary sewer line and that your gutters are being discharged out onto your property or a wet well.

Nyack rain gutter incorrectly connected directly to a sewer line. Roof drains and leaders are typically the worst form of inflow as they produce sudden, intensified increases in flow to the sewer system during rainstorms. Photo: Dylan Hofsiss

What municipalities are you targeting?

Inflow & Infiltration (I&I) is something that we are trying to decrease in all municipalities in the Town of Orangetown. We are, however,  focusing our efforts on Upper Nyack, Nyack, and South Nyack due to an Order on Consent issued by the NYSDEC. The sewage from all three of these municipalities eventually makes its way to the Pump station located on Burd Street, where it is then pumped to the wastewater treatment plant in Orangeburg.

How are you prioritizing your efforts?

Due to the ease of inspection, we began with commercial properties. Businesses generally are all open during the day, which makes it easier to schedule a time to conduct an inspection. We are currently in the process of getting illicit connections in the commercial space disconnected. The intent is to inspect every single property in Nyack. A sump pump hooked up improperly in a residence is just as important as a sump pump in a business. We have, however, prioritized areas that were determined from previous flow studies to have the greatest amount of I&I. Our results in the commercial space have been extremely positive and we anticipate that we will continue to find these connections in residential properties.

How are you communicating with homeowners about your inspections?

We began our residential inspections at the beginning of April. We will be focusing on one area at a time, in order to do a thorough investigation of each household. Prior to knocking on residents’ doors, we sent out a letter stating what we were doing, and allowing residents to make an appointment for inspection that was convenient for them. We are trying to avoid going door to door, but for those that did not respond to our initial letter we will be putting door hangers to remind them that these inspections need to be done. We want the residents to know that our primary focus is to never have a sewer overflow in Nyack again. We are not threatening people with violations or fines. We want to work with them to get these disconnected the right way. We actually want people to let us know when they disconnect an illicit connection, so we can compare future storms to previous storms where we did have overflow events.

Can you describe exactly what you’ve been finding?

Our inspections have uncovered numerous incorrect hookups. We are generally finding sump pumps and roof drains that are piped right into the building’s main sewer line, with a substantial percentage of properties we’ve inspected having such issues. 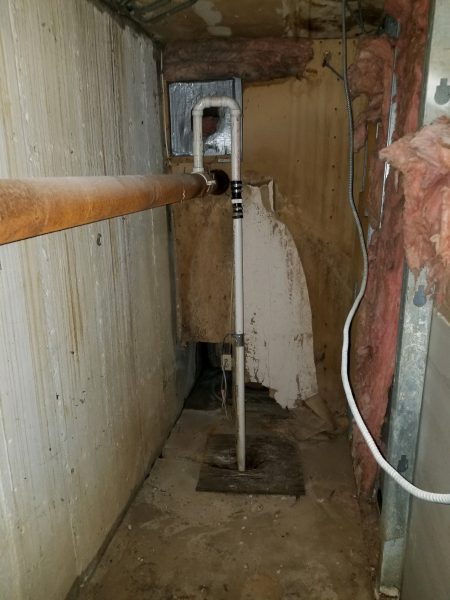 Sump pump in a Nyack basement hooked directly into the building’s sewer line. Stormwater must be discharged onto the ground, a catchbasin, or wet well, or it will cause raw sewage to overflow from a pumping station into the river. Photo: Dylan Hofsiss

Have you noticed any effect from your work on sewage overflows yet?

Every sump pump and roof leader that we disconnect has a positive effect on the overall capacity of the system. At this point, we have not had a storm that allows us to gauge the degree of impact compared to previous storms.

Besides this survey, what other work on Nyack’s sewer system can residents expect to notice in the next year or two?

As in previous years, we will continue to reline the sewer lines on various streets within Nyack. These relining projects help to prevent infiltration, which is groundwater that enters sewer lines through joints and damaged pipe. 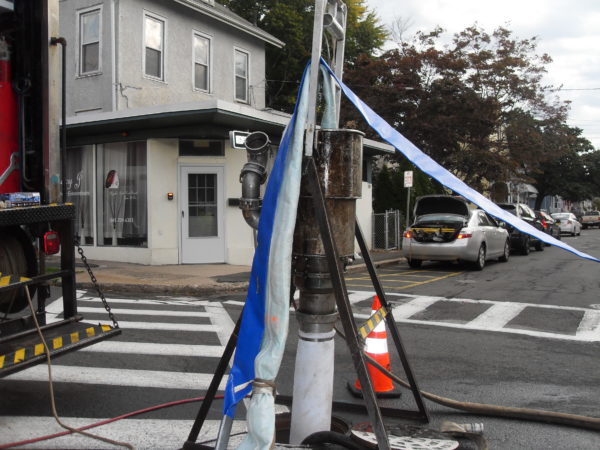 How much longer will this survey project go on?

There is no end date for this surveying project. We will be working on I&I detection until sewer overflows no longer occur, and even then we still need to make sure everyone is discharging groundwater the proper way.  The elimination of overflows is the first and most important step, but the ultimate long-term goal, for us and the NYSDEC, is that we completely eliminate I&I.

What else would you like to let Nyack residents know that they should do to prevent sewer overflows (besides getting their hookups checked)?

Another primary goal of this project is to educate residents on the right way to discharge water that may have entered their home during a storm. Discharging a portable sump pump into a slop sink in the basement is just as problematic as the individual who has a permanent sump pump incorrectly set up. Along with disconnecting all these illicit connections, informing people who may only get water once or twice a year that pumping that groundwater from their basement into a slop sink might be the difference between having a sewer overflow event or not.

If someone wants more information about discharging a sump pump, or thinks they see an incorrect hookup, how should they get in touch with you?

I can be reached anytime by email at dhofsiss@orangetown.com, or they can call the Orangetown Department of Environmental Management and Engineering at (845) 359-6502. We want homeowners to feel comfortable contacting us even when they know they may not be hooked up properly. We all have the same goal, and that is to never have sewage overflow into the Hudson ever again. 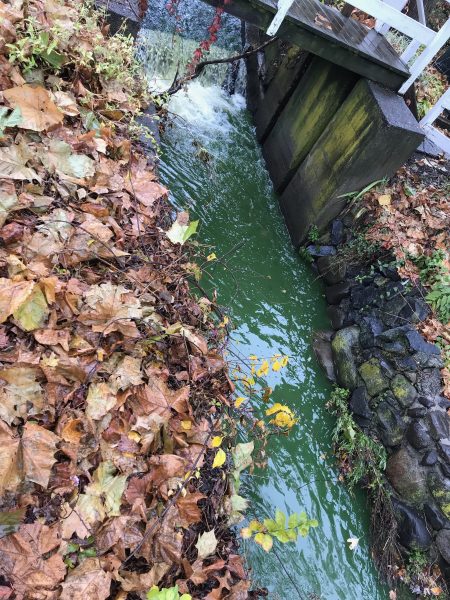 Orangetown environmental engineers use harmless dyes to trace sources of I&I (infiltration and inflow) into Nyack’s sanitary sewer system. While walking the culverts of Nyack Brook (pictured here), the engineers discovered a building in Nyack still discharging raw sewage into Nyack Brook, as the entire village did before the advent of wastewater treatment in the 1960s. The building was quickly connected to the sanitary sewer system. Photo: Dylan Hofsiss