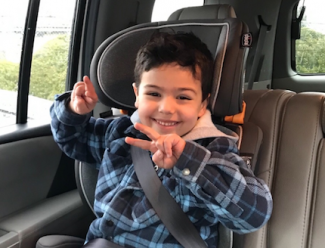 by Bill Batson
Five year old Jackson DiDona is battling an aggressive form of brain cancer, Diffuse Intrinsic Pontine Glioma (DIPG). Two members of Jackson’s family are members of the Dominican College community. His father Gregory, is the Assistant Director of the Academic Success Center and his grandmother, Nancy, is the Director of the Nursing Department. Doctors have told the family that Jackson has anywhere from four months to less than a year to enjoy life. Treatment is limited and very costly.
In addition to a Go Fund Me page, a Broadway concert fundraiser has been organized for tonight, Monday, May 20 at 7p at the Chapel of the Convent of the Dominican Sisters of Blauvelt, 496 Western Highway. The suggested donation is $20. Performers from of the Broadway and Off-Broadway stage will share songs from Phantom of the Opera, A Chorus Line, Man of La Mancha, Camelot, My Fair Lady and more.