by Rob Piersall
Students have a new space to cook up some recipes–and much more.
The Rockland Community College Culinary Center, located at 70 Main Street in Nyack, is up and running, and starting to operate at full form.
Though the marketplace and cafe, which is slated to open later in 2019, is still a work in progress, the teaching kitchens, a brand new theater space, and the classrooms have been up and running since Jan. 22.
When everything culminates, it will be a full, hands on experience for culinary students who attend Rockland Community College. In the past, the culinary-centric classes had been few and far between and bare bones. Now, they have a state of the art extension site.
Upon entering the building, students and tourists alike are greeted by art displayed in a glass case that demonstrates the history of cooking in New York. David Kimmel, Director of the Culinary Institute, said this theme is intentional.  All art on display throughout the building represents, or will represent, New York on some level.
“Sometimes, it’s more subtle, but sometimes it hits you over the head,” Kimmel said.
Kimmel believes in the idea of perpetuating New York, as it will make students understand the idea of culture and community as they enter the real world.
The building, which originally opened in 1907 and was previously occupied by Orange and Rockland Utilities, still has some of the original architecture, including a staircase with its authentic railings, deco-style glass doorways and original terrazzo flooring. This is in combination with the contemporary design which makes it spacious and comfortable.

New Theatre an Homage to the Past

One of the two main new spaces, the theatre, was previously occupied by Orange and Rockland utilities as a call center. When Kimmel saw the layout, he realized it was originally a theatre based on the way the floor slants upwards. 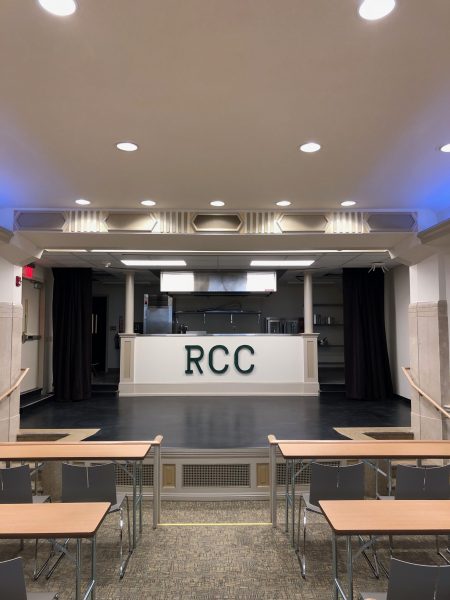 The theatre is equipped with a brand new stage and monitors on the walls so you can see what the instructor on the stage is doing at all times. Kimmel said that everything in the theatre is original, minus the furniture and fixtures, which maintain the integrity of the space.
And as an homage to the original theatre space, Orange and Rockland will provide the college with original photos of the center to be displayed on the walls of the theatre.
The vision for the theatre is to have it also be used for community outings and for groups to rent it out when needed.
“Remember, we are called Rockland ‘Community’ College,” Kimmel said. “That community interface is really important for the college, and the doors will be open to allow community to come in at a very reasonable price to utilize the space for anything and everything.”
He continued that the Culinary Center would like to have Mayor Don Hammond come in and do a cooking demonstration of his favorite recipes and pack the place out. Another idea would be to have the King Arthur Flour Company do demonstrations, and have the space used by guest chefs to enrich students and the community alike.
Outside the theatre, original light switches from when Orange and Rockland Utilities operated the theatre are still intact. While they no longer work, they will soon be enclosed in plexiglass and will be on display.
Down the hall is a newly installed elevator, next to an original stairway, and it will provide easy access to the kitchen directly upstairs.
The theatre area will be used in cohesion with the kitchen, with the elevator being used to transport food and equipment in seamlessly, so that the students can get a true “hands-on experience,” according to Kimmel.

Kitchen Space State of the Art

The aforementioned kitchen, designed by Kimmel, who is a Culinary Institute of America Graduate, is set up in a way that is conducive to the most efficient way of learning. There are 10 stations in the kitchen area, which can hold two students each and “even more if need be.”
Cris Spezial is the Department Chair of Rockland Community College’s Culinary Center. He emphasizes the mantra of being as prepared as possible when you enter from the classroom to the food industry.
“[It’s set up so] everything you need to know school-wise and business-wise will prepare you to go into the industry and represent the industry and school well,” Spezial said.
Above each station, there are monitors which allow you to see what the professor is doing. This allows students to continue working, while also following instruction. Students are also acclimated to state of the art equipment that they will use as they enter the food industry.
In addition to the equipment, students are taught to keep everything spotless. Spezial preaches sanitation and said his students have come to embrace and respect it.
“We have been here almost four months and this is spotless, Spezial said. “That’s how it’s going to continue to be.”
Spezial, a food-lifer who operated Nyack Gourmet in downtown Nyack, said that the response to what the Culinary Center has going is attracting notice from the outside.
“Industry jobs are contacting us and want to recruit our students,” he said. “They know what we are teaching here.”
Spezial echoed that this is because the students are seasoned well and prepared for the outside world through his classes. There is an emphasis put on working as if you are a chef in actual kitchen in Spezial’s classes, which has made all the difference.
“We want to make sure that if you come here, and you are learning, and you see this out in the industry, ‘I’ve got it, I’ve did it,” Spezial said. “It goes beyond learning in the classroom, they are also learning from the equipment they see.”
Apart from classes offered from the college, like the theatre, the kitchen area will also ultimately be available to be rented out.
“This will also be used for community cooking classes, kids cooking classes, teenage cooking classes, food enthusiast programming, team building, corporate training. Anything,” Kimmel said.
The icing on the cake of the space is an intimate teaching table where a dozen students can sit and see their chef or instructor demonstrate.
Opening later this year across the hall will be the accompanying marketplace. The marketplace will be run by outside industry professionals in concert with the college, according to Kimmel, and will be open to the public.
However, for one night, the market will turn into a pop-up restaurant, with the French doors opening onto the street, so students can gain the full restaurant experience. The students’ curriculum includes creating and pricing a menu as well as developing recipes. That curriculum will culminate on this night where all their skills they’ve learned will come into play, according to Kimmel.
In the kitchen, there is a brazier among other state-of-the-art equipment. It will be one of the pieces used as part of a big, entrepreneurial project. The students will, at some point, have to jar or can a food and sell it themselves in the marketplace.
“Yes, it’s important they know how to use the brazier,” Kimmel said, but it’s also there for another reason. Hopefully, he said, they will choose the New York-grown apples.
“They learn how to do this, and it sticks with them. That way, whenever they are working somewhere, they know how to use locally grown food, thus spreading New York into other communities and cultures throughout the country and world,” Kimmel continued.
Kimmel’s emphasis on the New York and local community stems from Gov. Andrew Cuomo’s “Taste New York” initiative.
In addition to the aforementioned meaning of “community” in Rockland Community College, Kimmel wants New York to shine through in multiple facets of not only the building, but in the classrooms and beyond.
“For students, it’s important to appreciate things that are local and how to support the community,” Kimmel said on his love for New York. “It needs to be understood all over the country and in our culture. It builds a sense of community and it makes New York better.”

Rob Piersall is a Westchester native with ties to Nyack, where he works as a barista at Art Cafe. He is a 2018 graduate of SUNY New Paltz where he was the Managing Editor of his school’s paper, The Oracle. He is Senior Editor at MetsMerizedOnline.com.
In this article:Cris Spezial, rcc, RCC Culinary Center