“There’s a man outside making a picture,” exclaimed Helen Hayes’ daughter Mary. It was November, 1939, at Pretty Penny, the family’s house on N. Broadway. The man outside was Edward Hopper, who had been commissioned for an oil painting of the house by writer Charlie MacArthur. The painting would be for MacArthur’s wife, Hayes, a two-time Oscar winner and one of the few people to have won an Emmy, Grammy, Oscar, and Tony award (or, to fans of 30 Rock, an EGOT). Hopper appeared unannounced in the yard, having taken the Nyack bus from his New York City apartment to make his first sketches of the house. The commission was the only one Hopper ever accepted; the job of painting an exact replica of a building made him very grumpy despite the hefty $2,500 commission. Aside from his days at art school, it was to be the only time that anyone told Hopper what to paint.

The Italianate house at 235 N. Broadway that became Pretty Penny

Eli Gurnee, a Nyack merchant and landowner, built the Italianate-style house, with its distinctive central rooftop belvedere, around 1857. In 1872, local architect Horace Greeley Knapp completed an expansion and remodeling of the house. The interior is theatrical; there are unusual details, including a two-story glass-topped entry way on the north side. Behind the house, overlooking the Hudson River, a series of terraces step down to the river. Hayes’ rose garden still thrives along with a terraced fountain and swimming pool, but the lower tennis court and boat dock are gone, replaced with a low-roofline now dwelling on the shore. Hayes installed a brick wall along the sidewalk for privacy. Later, Rosie O’Donnell added tall evergreens to obscure the face of the house.

According to common legend, Hayes exclaimed that the house cost them a pretty penny, and the name stuck. Artist Bennard Perlman has offered a different suggestion, that “the name does not refer to the $1,500 Depression-era price they paid for the house, but rather to a radio series, ‘The New Penny,’ in which Hayes played a part.” “All the money I made on that show went into the house and to buy the painting,” Hayes once confessed.

The year 1939 was a lean time for Hopper. When he got the MacArthur commission, he hadn’t painted anything for months. His art dealer, Frank Rehn, let Hopper know that MacArthur wanted to commission a painting of their house and that since Hopper was raised in a house just down the street, MacArthur thought he would be an ideal choice. Both Rehn and Jo, Hopper’s wife, encouraged him to take the commission; the money was good. 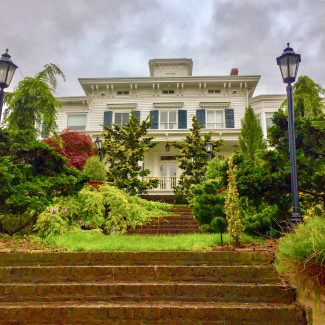 Hopper resisted for all kinds of reasons. After viewing the house on November 3, he declared it was impossible to paint and hard to get it simple enough. According to Jo’s diary, “the back (of the house) was too cut up with staircases coming down from two sides & much doing in the grounds: swimming pool, tennis court and boat landing.” During his visit with MacArthur and Hayes on November 3, Hopper told them he didn’t want to paint the house, claiming, according to Hayes, that “it does nothing for me…there is no light and there’s no air that I can find for the house.” Jo found his behavior embarrassing, but she convinced Edward to get started before it got any colder.

Hopper did most of his paintings in his studio from detailed sketches made on site. He made his first on-site sketches of Pretty Penny on November 8, and then returned with Jo the next day to make a sketch of the front of the house and a drawing for a detail of the façade. On the 10th, he made another sketch of the front that included a tree branch dangling from the top left, and it was incorporated in the final work. 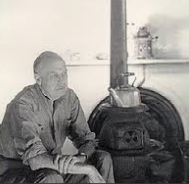 Hopper near the coal stove in his Washington Square apartment that was also his studio.

Hopper stretched the canvas on November 16, making it small (40 x 28), and framing the house exactly without much foreground or sky. He approached the work as he had done with his earlier commercial illustration work, transferring the sketch mechanically to the canvas. On November 24, Edward and Jo came back to Nyack to check the color of the house and note more details. To complete the work, Hopper was getting up early in the morning so as to paint in the dim December light of his studio. By December 11, he had painted the clapboards; by December 16, the canvas was nearly done.
On December 17, Edward was cussing out Jo, Hayes, and his dealer because they requested that he paint in Hayes’ daughter and their French poodle. He did not give in. On December 21, he took the painting in to Rehn with the title Pretty Penny. When MacArthur called to say how pleased he was, Hopper was gruff. Jo had hoped to invite MacArthur and Hayes down to their studio but Edward was having none of it. The painting was hung in the downstairs parlor of Pretty Penny. 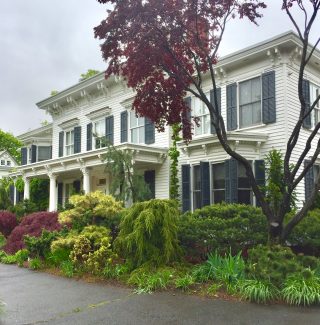 2017 Photo of Pretty Penny taken from a vantage similar to Hopper’s painting. The porch that appears in Hopper’s painting on the right side is gone. A driveway has replaced the yard. The north wing can be seen on the left. Notice how Hopper has altered the perspective to highlight the central belvedere that is all but hidden in this photo.

The painting was exhibited several times during Hopper’s lifetime, once at the Whitney, and then again, later, in Chicago on loan from Helen Hayes. In 1964, Hayes donated the painting to the Smith College Museum of Art, which had awarded Hayes an honorary degree in 1940. The house has gone through several owners over the years including Rosie O’Donnell, who started the authentic restoration work that was completed by later owners.
It is fitting that the house memorialized by Edward Hopper has thrived over some 170 years in Nyack, home to so many media stars and Victorian homes from the 19th century.

Photo Credit:  Pretty Penny, Smith College Museum of Art, current photos of Pretty Penny by Mike Hays
Michael Hays is a 30-year resident of the Nyacks. Hays grew up the son of a professor and nurse in Champaign, Illinois. He has recently retired from a long career in educational publishing with Prentice-Hall and McGraw-Hill. Hays is an avid cyclist, amateur historian and photographer, gardener, and dog walker. He has enjoyed more years than he cares to count with his beautiful companion, Bernie Richey. You can follow him on Instagram as UpperNyackMike.