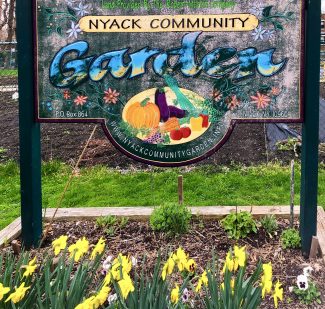 Once an overgrown terminus of a forgotten railroad on Franklin Street, the Nyack Community Garden has become exemplary of the community-minded ends local activism can achieve in partnership with local government and business. Jack Dunnigan, owner of Pickwick Books, and probably their longest continuous gardener, remembers walking by the garden in the early 1980s with his children and thinking, “Now here is a solution to my shady home garden plot that doesn’t produce much.” Today, the thriving and well-managed 40-year-old garden is one of the few open green spaces in Nyack positioned where the Nyack Brook is visible.

Once upon a time 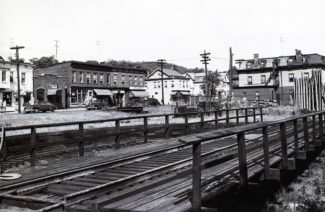 View of the turntable about 1945. In the background on the right is the decaying Opera House fronting Depew Avenue. The brick buildings in the center background still stand at the corner of Franklin and Depew Aves.

Nyack once had a convenient public transportation option to New York City. In 1870, a spur of the Northern Railroad came all the way to Nyack. Because the line ended in Nyack, engines had to be turned around for a return trip. Seven short rail spurs led to a turntable with an engine storage shed bordering Depew Avenue. Three extra sets of rails ran just east of Franklin next to the roundtable for storage of freight cars. The turntable was already in advanced decay when the rail line closed in 1965; the shed was gone and ailanthus trees sprouted from the rotting turntable. 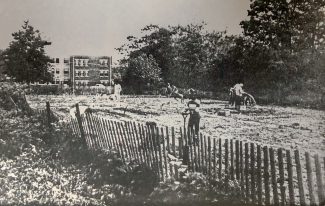 The old railroad turntable lot came under the ownership of the Robert Martin Company, which owned the land from Franklin to Broadway between Hudson and Depew. The Tallman Towers and the Nyack Plaza apartments were built in the front parts of the lot. The old turntable plot was deemed unbuildable and sat vacant while the apartments were built. The Nyack Parking Authority eyed it for a parking lot. The plot was also considered for a new post office.
The vacant space also caught the eye of people infused with the back-to-the-land spirit of the 1970s. The actual start date is somewhat vague. Journal News accounts in 1980 herald the second annual Nyack Community Garden. Barbara Gilman, one of the founders, remembers the time as the late 1970s. Gilman, along with Farrell Freeman and Dan Rogers, pushed for the site and were given permission to use the land by the Robert Martin Company. Robert Martin Company, according to Dunnigan, has been a strong and willing partner through all the years, allowing not only public use of their land but also by providing fencing, water, and mowing. 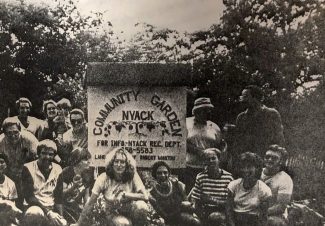 The Friends of the Nyacks provided financial support in the early days when funding was a perennial problem. Along with an environmental ethic, a goal of the garden was to promote racial harmony in Downtown Nyack.
Top soil was trucked to the site from the excavation of a new Grand Union grocery store that was being built in Central Nyack. The early garden, much smaller than it is today, was surrounded by a short wooden fence, so short that it was easy to step over and grab a fully ripe tomato. Kids also had the mischievous idea of starting tomato fights. Gardeners would return to looted and vandalized vines. In the winter of 1989, Robert Martin Company had a chain-link fence put around the garden. Access was now restricted to members with a key.
At first, water was brought to the garden by bucket, and later by hose, across Franklin Avenue and then by hose over the Nyack Brook from the Nyack Plaza apartments. The hoses also tempted vandals; they were often cut. Again, Robert Martin Company stepped in and arranged for a direct water connection from the apartments at their expense.

The making of a community 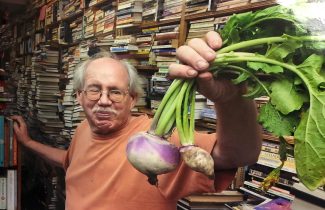 Communities work well with rules. And from its start, Nyack Community Garden members lived by a set of rules. Plots must be planted and cleared by a certain date; weeds must be controlled; the gates must be kept closed; and no dogs or planting of sunflowers and corn (because their height might rob abutting plots of sun). The rules have expanded somewhat over time but remain much the same.
Gardeners must sign up for space in early spring with preference given to returning gardeners. First-time gardeners are given a half-plot on a first come-first served basis. Many years there is a waiting list. A full plot, once $3, is now $35.

The growth of community spirit 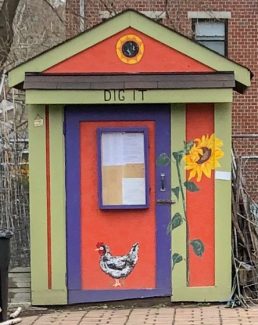 Despite all the rules, the Community Garden is entirely self-governed. Every gardener must participate in one of 16 working committees that vary from staking of the plots, path maintenance, newsletter, and fall pot-luck dinner.
Gardeners are proud of the efforts, and every year there is a juried garden contest. Gardeners are requested to be absent on jury day but Dunnigan remembers one gardener in particular who would be there anyway and was quick to point out his picks for prizes, most of which were his own crop. The 2018 awards were given for the Best Overall Garden, Best Maintained Garden, Best Flower and/or Vegetable Garden, and Most Creative Garden.
In the spirit of community, the garden has participated in a number of charitable programs over time, donating produce to those in need.

The garden almost became a gym

The Community Garden has managed its way through a number of hardships over time. One of the biggest came when the Village Board began considering the site for a Police Athletic League (PAL) gym. Rockland County PAL received a $4.5M grant to build a gym but wouldn’t receive the money unless they secured a building site. The Village Board considered several new sites for the garden including the then gutted shell of the old Tappan Zee Playhouse (now the site of Brickhouse.) While no one doubted the value of a gym for kids, the loss of the garden was too much to take for local residents. Their outcry forced the village to consider other sites for the gym, which was never built.

“The happiest day is when the garden opens, the saddest when it closes,” says Dunnigan. This year, 66 plots have been allotted with seven new gardeners. The garden was staked and opened on April 6 with plots to be planted by May 31. The 2019 steering committee consists of Dunnigan and Lynda Grant as Co-Presidents, Marie Dellivio as Treasurer, and members Laura Paklan and Jill Remaly.
Now that we are at the “happiest day,” seeds are already being planted for greens and peas. The Nyack Community Garden is a fine example of what a community can achieve by working at, well, the root level. Our health, wellness, camaraderie, and scenery have been enhanced now for over forty years. What a contrast to the garden’s prior industrial setting.
Photo Credits: Sign and shed photos by Mike Hays; 2018 gardeners by Celia Juris; Turntable photo as shown in Nordstrom Nyack in Black and White; Jack Dunnigan photo courtesy of Jack Dunnigan.
Michael Hays is a 30-year resident of the Nyacks. Hays grew up the son of a professor and nurse in Champaign, Illinois. He has recently retired from a long career in educational publishing with Prentice-Hall and McGraw-Hill. Hays is an avid cyclist, amateur historian and photographer, gardener, and dog walker. He has enjoyed more years than he cares to count with his beautiful companion, Bernie Richey. You can follow him on Instagram as UpperNyackMike.