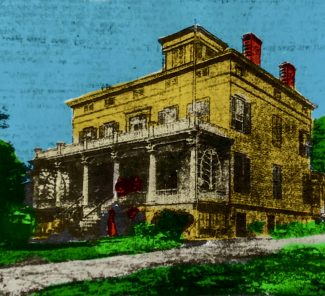 Colorized version of the 1889 litho of the Mansion House. A few people on the front porch, which faces Main St, can just be made out.

It was May 1886, and a 8 ½-foot, 239 pound sturgeon was suspended from a tree for villagers to view in the yard of the Mansion House in downtown Nyack. For a moment, forget about the fish and focus on the structure behind it. The Mansion House was a bustling, Italianate, three-story wooden hotel and farm-to-fork restaurant with a large porch that resided in a lot stretching from Main to High Streets.
Whether it was a house first or a hotel first is a subject lost to time, but the Mansion House, opened in 1827, was one of Nyack’s earliest hotels. On an 1859 map of Nyack, the hotel appears as a singular building on the large property owned by Tunis Smith. By the 1880s, the hotel is a go-to place not only visitors but also villagers–and fish.

The Hotel known for its gin & tansy 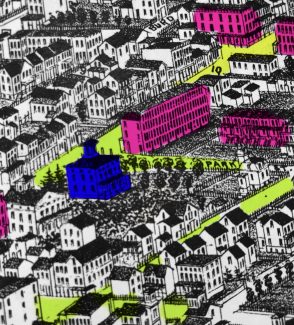 The Mansion House (in blue) at the corner of Park and Main Streets, as shown in the 1884 Burleigh map. In red are buildings that still exist from that time.

The only known photo of the Mansion House hotel appears in the 1889 New York Daily Graphic article, Nyack, N.Y.- The Naples of America. A rendering of the house also is shown in Burleigh’s 1884 map of Nyack. The three-story building is remarkably similar to the two-story 1854 Tunis Depew house that still stands on Piermont Avenue in Nyack. Both have an elevated first floor accessed by a central stairway. A porch with rounded columns stretched the width of the first floor, topped by a low decorative fence on its roof.

The Mansion House had a large shaded lawn surrounded by a farm where vegetables were grown for the hotel’s restaurant. Cows on the property supplied fresh milk and butter. A hennery provided all the eggs that were needed. The bar was supplied with the best of liquors. A specialty of the house was gin and tansy, the tansy being an herb grown on site.

A strike at the Mansion House

In 1853, the table waiters at the restaurant in the Mansion House went out on strike at 8a, as breakfast was being served, demanding a pay increase to $18/month from $15. General Yale, the proprietor at the time, acceded to their demands and would pay an advance. The waiters finished serving breakfast. Days later, the waiters appeared in the office to get their advance, were paid, and told their services were no longer needed. As the gong for dinner sounded, the ex-waiters found 12 young girls, neatly attired, taking their places as the new servers in the dining room. 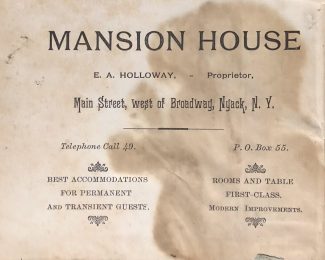 1887 ad for the Mansion House Note the phone number

Holloway was the proprietor of the Mansion Hotel during its halcyon days. Holloway was known to be a good chef. He had previously served as the manager of the Smithsonian hotel on lower Burd Street near the ferry landing, as well as the Broadway Hotel, located at the site of the current Nyack Village Hall. Holloway was originally trained as a carriage painter and for a time he owned a carriage business on Broadway while he ran the Mansion House. After giving up his lease on the Mansion House, Holloway moved on to run the Opera House and Franklin House (including its gardens) on Franklin and Hudson Streets.

The Mansion House hosted a number of events, but clambakes were particularly popular, at $0.50 per person. In 1884, the annual parade of the fire department concluded with an old-fashioned Rhode Island clambake on the grounds of the Mansion House for approximately 200 people.

Nyack police officer Ennis put a catch of eels in the Mansion House refrigerator overnight in the summer of 1889. Apparently, he had a storage arrangement with Holloway. The next morning, the Mansion House cook found them and proceeded to cook them. Diners thought they were delicious, much to Office Ennis’ chagrin when he appeared later to find the eels were gone
On another occasion, N. Ward, the proprietor of Mansion House after Holloway, found Pell’s fish market baskets on the premises. Pell’s on Main Street had recently been robbed of oysters. On the same night as the oyster burglary, chickens were stolen from Kolsch’s chicken yard. One chicken, too large to fit between the fence slats, was left sticking there with a broken back. Ward reported his find of Peel’s baskets to the local justice but he was in for a surprise. A warrant was issued for Ward’s son Charles and a friend, both of whom had left town.

Crime does not pay at the Mansion House 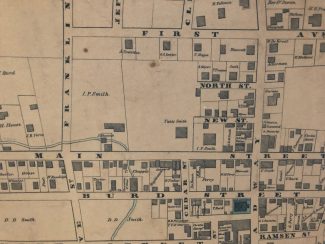 1859 map of Nyack. Mansion House is in the center facing Broadway. New and North (not High) Streets dead end at the Tunis Smith property. Bridge and Park Streets are not yet built.

The Mansion House bar and restaurant were popular spots and a source of ready cash for burglars. On one occasion, the cash box in the bar was opened and $12 was stolen, along with liquor and cigars.
On another, more serious occasion, John Melrose, Mansion House bartender, was beaten with a cane by John Dean of Closter. Melrose testified that he often had late lodgers checking in on Sunday night who had come up from the city to see their girls and then leave on the first train on Monday morning. He was trying to close up the bar on a late Sunday night when Dean became angry and abusive, striking him over the head three or four times, after which there was a struggle until Melrose could get him down on the floor. Melrose testified in the case from his bed as he was too injured to appear in court.

The demise of the Mansion House 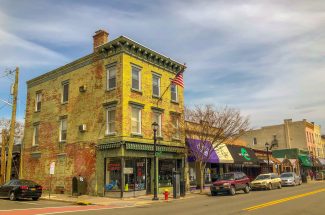 2019 view of the corner of Park and Main Streets. The 1885 Daniels building is on the corner. The Mansion House would have been to its right (just before the next three-story brick building) and just behind what’s now Casa Del Sol restaurant.

Parts of the Mansion House property were sold over time. In 1884, the three-story brick Daniels building was located on the corner of Park and Main, where it still stands, now housing the McManus Pharmacy on its first floor. By 1892, New Street was extended all the way to Park, cutting the Mansion House farm in half. By 1903, the Mansion House was mostly hidden by new buildings housing a restaurant and plumbing, laundry, and paint businesses. By 1910, the Mansion House disappeared from town maps. Along with it went an old-time ambiance, replaced by brick buildings and a business-dominated downtown.
Photo Credits:  photos by Mike Hays
Michael Hays is a 30-year resident of the Nyacks. Hays grew up the son of a professor and nurse in Champaign, Illinois. He has recently retired from a long career in educational publishing with Prentice-Hall and McGraw-Hill. Hays is an avid cyclist, amateur historian and photographer, gardener, and dog walker. He has enjoyed more years than he cares to count with his beautiful companion, Bernie Richey. You can follow him on Instagram as UpperNyackMike.