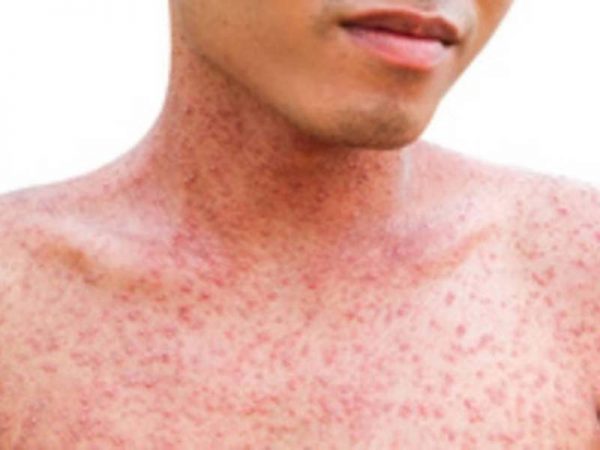 Update 3/26: Rockland has declared a state of emergency due to the measles outbreak. Starting at 12a, those under the age of 18 who are not vaccinated against the disease will be banned from public places for 30 days or until they are vaccinated.

Measles is a highly contagious respiratory disease (in the lungs and breathing tubes) caused by a virus that is spread by direct contact with nasal or throat secretions of infected people (when a person infected with the measles virus breathes, coughs, or sneezes). Measles is one of the most contagious viruses on earth; one measles infected person can give the virus to 18 others. In fact, 90% of unvaccinated people exposed to the virus become infected. You can catch measles just by being in a room where a person with measles has been, up to two hours after that person is gone. And you can catch measles from an infected person even before they have a measles rash.

The following statistics were taken from a 2018 – 2019 Measles Outbreak in Rockland County report.

People are considered infectious from four days before to four days after the appearance of the rash.

Measles can be dangerous, especially for babies and young children. Others who are at high risk for complications if they get the measles include pregnant women who are not immune, as well as those who are immune-compromised or immunosuppressed (when your body can’t fight disease).

Some people may suffer from severe complications, such as pneumonia (infection of the lungs) and encephalitis (swelling of the brain). They may need to be hospitalized and could die. Here are some facts about complications in children and pregnant women:

Subacute sclerosing panencephalitis (SSPE) is a very rare, but fatal disease of the central nervous system that results from a measles virus infection acquired earlier in life. SSPE generally develops seven to 10 years after a person has measles, even though the person seems to have fully recovered from the illness.
For more information click here.

The Measles Outbreak in Rockland County

At the end of September 2018, an international traveler arrived in Rockland County with a suspected case of the measles. Per protocol, the Rockland County Department of Health (RCDOH) was notified and immediately activated its Communicable Disease Team to investigate. There have been additional cases of measles from international travelers to Rockland, exposing more people to measles. People who are unvaccinated risk getting infected with measles and spreading it to others.
These cases are presently clustered in eastern Ramapo (New Square, Spring Valley, Monsey), however due to Rockland County’s small geographic size, exposure to the measles may occur anywhere in the county.
Since measles is highly contagious, the Health Department, with additional support from the New York State Department of Health and local partners, is working to limit exposures and is offering a free vaccine to boost the county’s immunization rate and protect its residents from the harmful effects of the measles virus.
The RCDOH, Refuah Health Center, and private pediatricians and family doctors have administered over 16,000 doses of MMR vaccine.
To prevent the spread of illness, the Department is advising individuals who may have been exposed and who have symptoms consistent with measles to contact their health care provider, a local clinic, or a local emergency department before going for care. This will help to prevent others at these facilities from being exposed to the illness. Residents who have been asked by a health care provider to “watch for measles,” or who are otherwise ill–including flu-like symptoms–are advised to stay home and not go out in public.

A safe and effective measles vaccine that can prevent suffering and death has been available for more than 50 years. For more information click here.
High community vaccination rates help protect people who cannot get vaccinated because they are too young or have specific health conditions. Free MMR vaccines are available by calling:

In addition, MMR vaccines are available at local health care providers or by calling a local federally qualified health center, such as Refuah and Hudson River Health Care. The federally qualified health centers see patients on a sliding fee scale and by appointment. They may require patients new to their centers to have a well visit first, before a vaccine can be given.

There may be medical reasons not to get the MMR vaccine, speak to your health care provider.