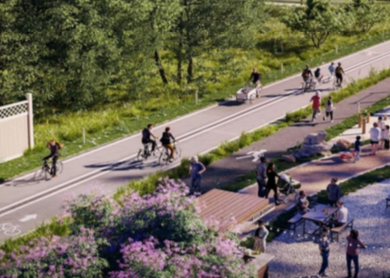 by Dave Zornow
Hikers, bikers, runners and rail trail fans rejoice — New Jersey is planning to convert eight miles of  unused CSX rail lines into the Northern Valley Greenway, which when completed, will connect to Orangetown’s JB Clarke Rail Trail.
“This is the first leg of a proposed network of North Jersey trails that will create protected, off-road access to the south, including future connectors to the George Washington Bridge, the September 11th National Memorial Trail and other NJ and national trails,” says Andrew Mikesh, Team Lead for the Northern Valley Greenway Initiative. The Northern Valley Greenway plans to connect to the proposed Bergen Hudson Light Rail in Englewood, NJ, enabling bicycling trips to NYC, Jersey City, Hoboken and beyond.
NVG will convert dilapidated train tracks running through Tenafly, Cresskill, Demarest, Closter, Norwood and Northvale into a multi-use, recreational pathway for biking, running, and walking on an existing unused section of CSX Transportation’s Northern Branch Corridor rail line north of Englewood, NJ. This line was used for years by a once a week commercial train that delivered to a local business. However, it has been dormant for the last decade.

The public is invited to attend the… 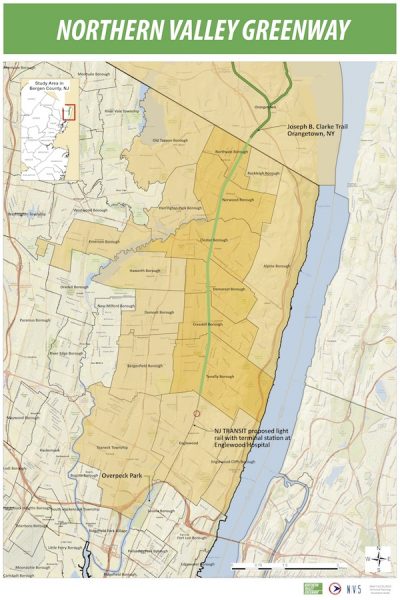 Tuesday, March 5, 5-8p
Northern Valley Regional High School
150 Knickerbocker Rd, Demarest, NJ
This event will give you the opportunity to review draft exhibits of the planning-level study findings, ask questions, express your support and discuss any concerns with the project team, NJDOT representatives and the planning contractor, NV5.

“The NJ Bike & Walk Coalition announced at their annual NJ Bike & Walk Summit this past Saturday the creation of a North Jersey Urban Trails Network, of which the Northern Valley Greenway is a major backbone,” said Cyndi Steiner, Executive Director NJ Bike & Walk Coalition. “The NJUTN also encompasses other out of service and abandoned railroad rights of way in Bergen, Essex, and Hudson Counties to create a network of connected shared use paths that will serve as additional transportation options so that people can get from point A to point B by bike or by walking. These paths will also provide substantial recreational and economic benefits to towns located along or close to the network. Another major spine in the network is the Essex Hudson Greenway, which leads from Montclair to Jersey City, that could one day provide a bikable route from Montclair to the Gov. Cuomo Tappan Zee Bridge.”
The wide space of the double-tracked railway will allow for multiple recreation and fitness uses, including biking, running or walking. Features may include exercise stations, benches, rest areas, artwork, gardens, dog parks and more. 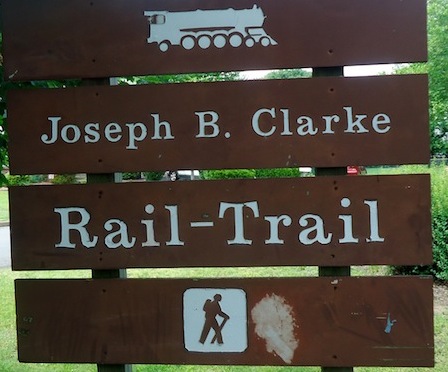 Orangetown’s Clarke Rail Trail opened an extension from Lowes near Rt 303 in Orangeburg to the Blauvelt Library last fall.
To build the NVG, the project must first acquire the land from CSX before the tracks can be removed and capped. The right of way must also be enhanced to control road crossings and to supply an attractive park atmosphere and provisions made for on-going maintenance.
The project is a join effort by the Rotary Clubs of Tenafly, Northern Valley & Cresskill/Demarest and an inter-local municipal initiative with official resolutions of support from the mayor and trustees of the six boroughs along the line.
See also: