by Elizabeth Fischer
There seems to be a fundamental misunderstanding about the Bike/Pedestrian Shared Use Path (SUP) that will open by this fall on the Mario Cuomo Tappan Zee Bridge. Some local officials have suggested that its operating hours be restricted to daylight hours, because it’s a recreational amenity. That view ignores the fact that it was constructed by the New York State Thruway, which builds transportation systems. The SUP certainly has recreation and tourism benefits. But principally, it’s a transportation corridor, just like the adjacent roadway. For this reason, the SUP needs to be open 24/7 for bicycle commuters, even as the Thruway should consider closing ancillary recreational features after dark. 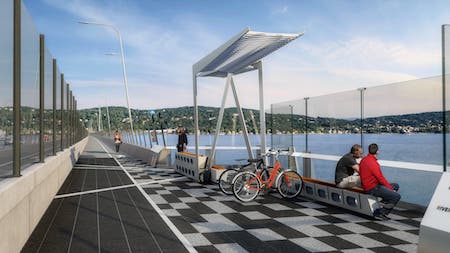 The expression, “build it and they will come” applies here: if the SUP’s hours for commuter bicycles match the operating hours of the bridge (24/7), it will become a green, healthy transportation alternative for Lower Hudson Valley bicycle and e-bike commuters. The short sighted thinking of some elected officials to limit its hours will cheat New York State taxpayers out of the full return on investment from the estimated $400 million value of the Shared Use Path construction.
I live in Valley Cottage and rely on my e-bike to get everywhere — except Westchester County, for which I must wait for a bus and pay a fare to take my bike across the Hudson River. The bus is better than nothing, but slow: instead of waiting for a bus, I could easily be over the bridge en route to my destination. If I need to get to Westchester on time, I just drive. Late nights, the situation is even worse: my only option is to drive. I am privileged to own a car, not all residents of Rockland and Westchester counties are as lucky.
Fortunately, the replacement for the Tappan Zee Bridge will soon include a
Shared Use Path which will enable convenient and easy passage for bicycles in the Lower Hudson Valley. It could be a real game changer — especially for people in the region without a car to make it to their jobs, especially late night shifts. It also has considerable green benefits for Rockland residents who ride Metro-North trains: they can skip the ever-worsening traffic and parking situation Tarrytown, and take fewer car trips across the Hudson to help make our community cleaner and greener.
The Lower Hudson region is part of the NYC Metro area where the Brooklyn, Manhattan, Williamsburg, Koch, and RFK bridges are all open 24/7. The George Washington Bridge bike path is the only comparable bridge that limits its hours (12m-6a), but it was open 24/7 prior to security concerns following 9/11.

?Some local elected officials have advocated for limiting the operating hours of the SUP to daylight hours in response to a small but vocal constituency living near the bridge endpoints that has expressed concerns about disruption to the local neighborhood. We all enjoy our peace and quiet in Rockland County. But surely there’s a way to address local concerns without access to this transportation infrastructure. Bicycle commuters are incredibly quiet and unobtrusive, they usually ride alone and thus single file, and they just don’t loiter. Compare that to noise and pollution from the 2.4 million 18-wheelers rolling through town every year, or even the cars that some of us would drive if we can’t bike.
The conversation has so far been cast as a zero-sum tug-of-war over operating hours, in which everybody stands to lose. A better approach would be to place limits on the recreational aspects of the SUP, while keeping the transportation aspects open 24/7. In practice, this would mean closing the parking lots at an hour consistent with other commuter parking lots. Bicycle commuters coming home late at night will barely be noticed. If there are security concerns of allowing people onto the SUP late at night, they can be addressed using a buzz-in system like that on San Francisco’s Golden Gate Bridge.
The new Mario Cuomo Bridge was designed to for at least the next 100 years, a century which we now know must be greener than the last. The SUP should encourage, not discourage, residents to cross the river in a green, sustainable and healthy way.