It’s easy to feel isolated and outnumbered as an environmentalist. We walk through the world acutely aware of the harm humans are doing to the earth while so many around us continue to go about destructive daily habits. It’s easy to succumb to the feeling that our neighbors don’t care, and that we are alone with our ecological grief.

But on Tuesday March 19, at the Rockland Legislature’s public hearing on the proposed plastic bag ban, my faith in my neighbors was profoundly restored. During nearly two hours of public comment, the vast majority of Rocklanders present spoke with strong support for this bill that would ban single-use plastic bags throughout the county. Their speeches were eloquent, inspiring, and scientifically sound. They spoke terms both global and local. They spoke in terms of climate change and littered landscapes. They spoke of micro-plastics in the ocean and cancer in the human body. These wide-ranging and well-informed remarks proved that this audience understood the core tenet of ecology: Everything is connected. It was the most moving two hours I have ever spent at a public legislative hearing. 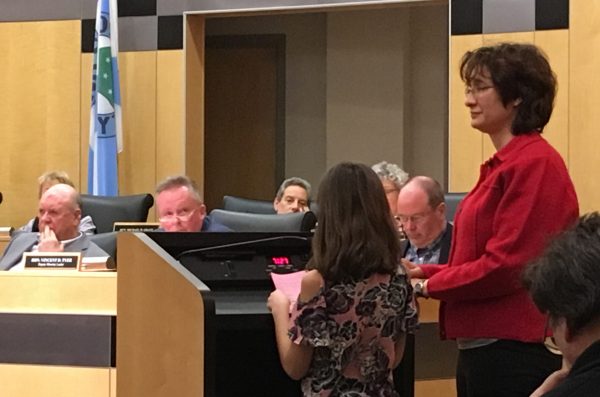 As the youngest person to address the Legislature during the public hearing, 9 year-old Olivia reminded lawmakers that our trash never really goes “away.” It just ends up somewhere else in nature. Photo: Lorien Barlow

In one of the evening’s most memorable moments, a nine-year-old girl approached the podium. After taking some time to adjust the microphone to her diminutive stature, she unfolded her letter and addressed the assembly. Her message was simple: When we throw out our trash, there is no “away.” Everything goes somewhere. She learned this on vacation to the Dominican Republic, where she saw heaps of plastic trash from America washing up on the beach. Afterwards, her mother spoke, reminding us that “we do not inherit the planet from our parents. We borrow it from our children.”

Young people were often the focus that evening, as many people alluded to the broken planet we are leaving to future generations. Over a dozen high school and college students attended the hearing. Two of them gave speeches; one high school senior mused, “I don’t understand how this is even a question.” Legislator Laura Santulli, the bill’s Republican co-sponsor, echoed this when she quoted her 11 year-old son, who wondered how banning single-use plastics could even be a subject of debate. This youthful conviction reminded me of the student climate strikes that have been growing across the world. Betrayed by older generations who have trashed the planet, the frustration of young people is reaching a fever pitch. They are alert to the urgency of the ecological crisis we face, and they have no more patience for incremental progress and half-measures.

Passing the plastic bag ban is an example of what can happen when a community comes together in support of what is best for the whole community, not only in the short term, but in the long term. We are ready to make the choice that will benefit our environment and ultimately our world.

With that urgency in mind, I went to the hearing with ambivalent support for this bill. Of course I’m in favor of banning single-use plastic bags. But remember the proverbial checkout question: “Paper or plastic?” What happens when we take plastic out of the equation? A huge uptick in paper bag consumption is the logical result. And, unfortunately, paper bags come with their own environmental problems. Pound for pound, they have an even bigger carbon footprint than plastic. Other municipalities have anticipated this problem. New York State counties like Ulster and Suffolk have passed laws that ban plastic while also placing nominal fees on paper bags. Research has shown that both together result in the most desirable outcome: a major shift to reusable bags. Ultimately, this shift in consumer habit is the only sustainable outcome. 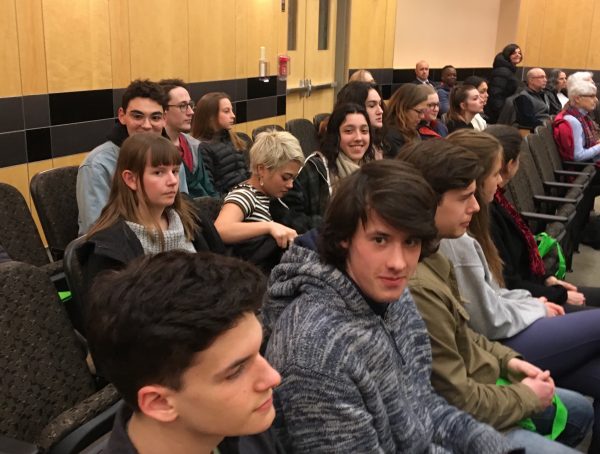 A dozen students from local high schools and colleges turned out in a show of support for the law. Young people were often the focus of the evening, as many speakers alluded to the broken planet we are leaving to future generations. Photo: Lorien Barlow

Nyack Sustainability Coordinator Marcy Denker is keenly aware of this end-goal. “Since the best option for the environment is to use neither plastic nor paper,” Denker told me, “the Village of Nyack is preparing to launch a BYOBag campaign to remind shoppers to get into the habit for bringing their bags with them when they shop.” The Sustainability Committee will be teaming up with Nyack High Schoolers to launch this BYOBag campaign at the Farmer’s Market starting April 4th. The campaign will last through the spring and will expand to include shops throughout the village. Besides displaying small BYOBag counter-top signs, merchants can participate by hanging posters designed by NHS Environmental Science students in shop windows.

Though I was at first disappointed that the new Rockland County bill stopped short of a fee on paper bags, I was still elated, along with the rest of the audience, when the Legislature voted overwhelmingly to pass it. Notably, the bill’s co-sponsor, Nancy Low-Hogan, finished her remarks by saying, “This law is just a first step.” For the young people in the audience, it was a lesson that incremental change is still the name of the game for now. 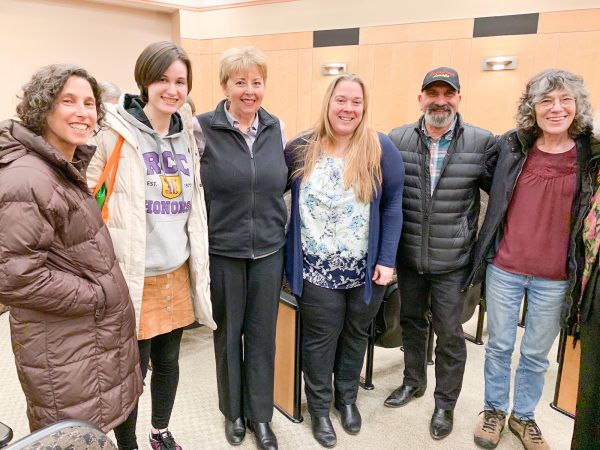 The single-use plastic bag ban bill was sent to County Executive Ed Day on March 20. He has 21 calendar days in which to sign it or veto it.
Let County Executive Day know how you feel about this bill by calling his office at 845-638-5122, or sending him at email at CountyExec@co.rockland.ny.us 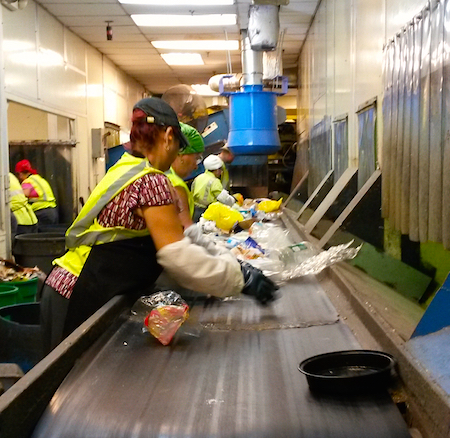 Quick-handed workers at the Materials Recovery Facility in Hillburn separate trash and plenty of those pesky plastic bags from your plastic container recycling. Photo: Susan Hellauer