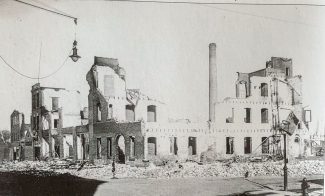 The ruins of the American Aniline Products plant as seen from Cedar Hill Avenue. Note the still standing chimney and, at the left, an old-fashioned electric street light.

Arthur Halliman, foreman of the Nyack Evening Journal, felt everything rocking in the newspaper office two blocks away from the American Aniline Products Corporation’s factory in downtown Nyack. “Then I heard a loud crash and all the windows flew out, not just the glass but the frames too.” It was January 31, 1919, and the the explosions brought on Nyack’s worst disaster on record. At least two workers were killed and 13 were injured at the plant, located where the Pavion apartments are being built today, at the corner of Cedar Hill and Railroad (now Depot Place) Avenues. The explosion was felt as far away as the Tarrytown waterfront. The subsequent multi-colored fire and further explosions reduced the three story, block-length factory to ruins. Firemen fought the blaze all day. Parents who commuted to New York City heard false rumors that the nearby Liberty Street school had collapsed.

Headline from the newspaper that came out on time despite the nearby explosion and fire.

It’s hard to fathom, but there was a silver lining in the disaster–actually, three. First, the 9:30a explosion blew the windows of the Liberty Street School and cracked a few walls but, unlike the rumors, the roof did not collapse on students. Calm heads led 1,200 elementary and high school students to safety, and only one student was injured by a glass fragment. Second, the fire department was prepared for disasters at the plant, even going so far as to have a stash of gas masks on hand in case of toxic chemical release. The firefighters kept the disaster from getting even worse. Third, the chemical plant functioned for less than a year and was never to return to Nyack, avoiding the inevitable toxic and rather permanent pollution of the village shorefront.

What are aniline dyes and how did such a plant end up in Nyack?

Aniline is a chemical byproduct of treated coal tar, which was an abundant waste product of the time. The process for converting aniline, which has the odor of rotten fish, to a colored dye when treated by acids was discovered by accident in England in 1856. Soon, other colors were discovered, and the wide range of synthetic dyes quickly replaced natural dyes. German chemical companies such as BASF, Bayer, and AGFA became the world’s largest producers of aniline dyes. Using the same process, new synthetic drugs, including aspirin, were found from coal tar derivatives, and the modern pharmaceutical industry was founded. 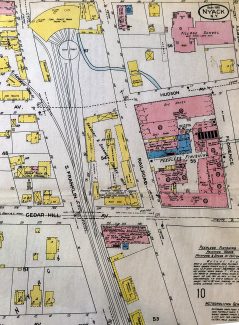 1910 Sanborn map showing the plant that would become the American Aniline Dye factory. The railroad roundhouse (now home of the Nyack Community Garden) is at the top. At the bottom is the baggage and passenger terminals of the Nyack Train Station. On the top right is the nearby Liberty Street School. Note the Nyack Brook entering the property where it makes a 90 degree turn to the Hudson River.

With the advent of WWI, German aniline dyes were no longer available to the Allies. American entrepreneurs launched a number of start-up companies along the Hudson River Valley and in northeastern factory towns. A ready plant was available in Nyack. The Peerless Finishing Company had built a large plant in Nyack, including a textile printer and dye works. The multi-story plant included a louvered roof with windows that provided natural light for the factory as can now be seen in the old Nabisco plant in Beacon. Poor management put the business in default in 1912. In January 1918, the Nyack Village Board approved the application of American Aniline Products Co. to acquire the plant along with permission to build a rail spur and two pipelines to the Hudson River for the transportation of petroleum, oil, and other liquid commodities. One pipeline would have traveled along Nyack Creek, which curves through the property as it turns downhill to the Hudson River.

Warnings of the disaster to come

Unregulated and inexperienced plant management caused numerous explosions in the Hudson River Valley before Nyack’s explosion. In 1916, the Standard Aniline Products Co. in Wappingers Falls exploded with the force of an earthquake at 9:30p, causing at least one death and a subsequent fire destroying the plant. Supposedly, the explosion was started by overheating of acids igniting sulfur and gases in a reactor tank. “Liquid fire” preceding the explosion badly injured many of the African American night shift. The company blamed the explosion on an employee putting water into a reactor. 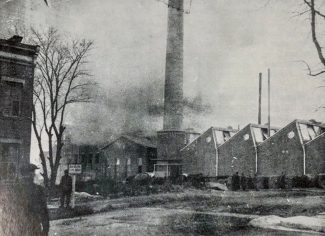 Photo taken as the first smoke started to appear after an initial explosion. View shows the east side of the plant. Note the size of the factory chimney and the louvered roof windows.

A number of small fires occurred in the Nyack plant in 1918 and drew the attention of the nearby fire department to the plant’s layout and use of hazardous chemicals and TNT. Chief Harry Williams ordered gas masks with a chemical explosion in mind. In September, orders were issued that no fireman was to enter the plant unless under order of the chief. Instructions were given on how to lay hose and what to do if a fire occurred.

At 9:30a, an explosion that started in the dye works section fronting Hudson Avenue rocked the village. About 100 people were in the plant at the time. One of the plant’s chemists, H. A. Nakamura, was pulled from the room but later died at Nyack Hospital. Louis Yashima, and perhaps one other, were blown to pieces but were never positively identified. Wounded employees were carried from the burning structure and taken to the nearby Metropolitan Machine Company across Railroad Avenue. 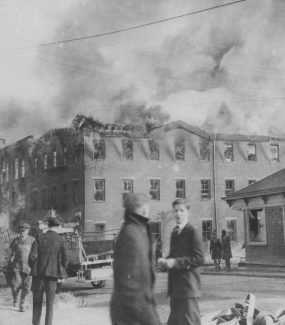 After the explosion, students and villagers watch the growing fire from Depot Place (then Railroad Avenue) and Cedar Hill Avenue.

The initial blast tore a hole in the roof and parts of the walls shot outwards. The multi-story plant was shrouded in flames and smoke. Explosions continued and another large blast happened around 10:15a. Embers and debris ignited several small fires in nearby homes and the abandoned Shoddy Mill (once located on the Hudson River in what became part of Memorial Park) across the ungraded Florence Street from the plant. Several fires at the nearby Nyack Journal News building were extinguished by employees. Despite all the havoc, an evening edition that reported on the event got out on time.
The ensuing fire and explosions forced firefighters from Nyack, Sparkill, and Piermont to abandon one building after another in the complex due to falling walls. Bricks from the walls covered many of the water mains so that firemen had to stretch hose some 1,000 feet to a water source. Firemen and police drove cars around the village to warn people to open windows and to stand away from possible flying glass. The fire was under control by 3p, but firemen continued to monitor the smoking ruins over the next few days. Hundreds of bystanders flocked to see the smoking ruins first hand.

Authorities quickly focused on the fact that TNT was stored onsite and that the company “practiced deceit and withheld information that should have been made know to the village.” William Henry Hand, living in the nearby Hand mansion, stated that the chemists were making dinitrotoulene, a toxic carcinogen that is a precursor to TNT. Did improper heating of the chemical cause the explosion? Even a state chemist visiting the site could not figure it out. The surviving chemists never spoke in public of the accident.

Aniline Dye factory ruins viewed from Cedar Hill and Railroad Avenues. The Liberty Street School can be seen faintly in the background.

Lawsuits came fast and furious. A state chemist from Albany arrived to examine barrels that purportedly contained TNT. Ex-assemblyman F. P. Demarest began organizing individual lawsuits against the company. Rockland District Attorney Lexow brought suit against the company. In May, American Aniline Products Company President Bernard Armour and plant manager Charles Dasher pled guilty to charges of improper storage of explosives and violation of village ordinances. The company was fined $1,000, Armour $1,000, and Dasher $500.
Despite losing the lawsuits, and even with all the bad publicity, the company went on to bid for a new plant site in Hayden, NJ shortly after the explosion.

A 150-foot chimney among the brick walls and debris became a fixture in the village cityscape, clearly visible from the nearby school and train station. Slowly, nature reclaimed parts of the ruins with sumac, buttonwood, and grey birch trees growing 20 feet high in the brick rubble by 1937. The building with the least damage on Hudson Street was used in the interim as a used-car showroom and gymnasium for the school. 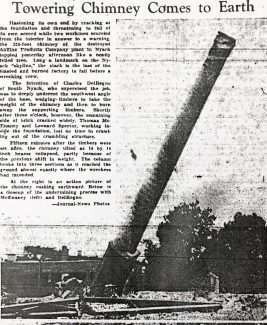 The demolition of the chimney, similar to that of the recent explosive demolition at the old Tappan Zee Bridge, caused a lot of excitement in the village as well as unique photo ops. First dynamite was considered, then a plan was devised to undercut the southwest brick foundation, insert wood braces, and burn them in order to bring the chimney down. The chimney fell prematurely but exactly where planned, breaking into three parts. All that was left was brick rubble. Local historian Myra Starr remembers jumping and climbing over bricks and concrete on her way home from school in the early 1940s.
The rubble was the ignominious end of the American Aniline Products factory in Nyack.

Careless plant management relating to inexperience with dangerous chemical reactions saved Nyack from pollution that was sure to come from the pipelines to the Hudson River that were approved but not yet built. If the chemicals were explosive, they were also highly toxic byproducts that would have been introduced into our waterfront. As occurred at Tom’s River, NJ, as well as other waterfront factories, a permanent eco-disaster was avoided. As horrible as it sounds, at the end of the day more lives were saved in Nyack than lost on that ill-fated but predictable day.
See Also:

Photo Credits:  Courtesy of the Nyack Library
Michael Hays is a 30-year resident of the Nyacks. Hays grew up the son of a professor and nurse in Champaign, Illinois. He has recently retired from a long career in educational publishing with Prentice-Hall and McGraw-Hill. Hays is an avid cyclist, amateur historian and photographer, gardener, and dog walker. He has enjoyed more years than he cares to count with his beautiful companion, Bernie Richey. You can follow him on Instagram as UpperNyackMike.