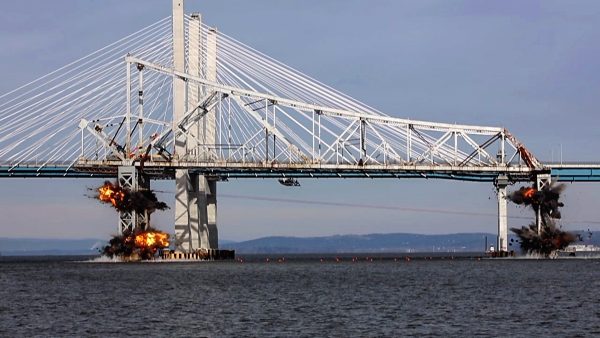 via The New NY Bridge

Nyack, Jan 20 — A Google search for the text “Tappan Zee Bridge” over the past week produces about eight pages of results, from near and far. In addition to blowing up a bridge, the demolition of the 63 year old crossing between Nyack and Tarrytown also blew up the Internet.
On Tuesday, spectators near and far gathered near the Hudson River to watch as Tappan Zee Constructors took down the eastern remainder of the Tappan Zee Bridge with a controlled demolition.
Here are a few of the reports and observations from around the web about last Tuesday’s big blow up event.
“Sometimes, the safest way to retire old infrastructure is not with careful deconstruction, but with precise explosions. Such was the case with an eastern portion of the 64-year-old Tappan Zee Bridge, which the Controlled Demolition company blew up on Tuesday morning. While the original plan had been to take it apart without explosives, concerns over the safety of the old structure shifted the plan to the more dramatic option.” — MEGAPIXELS: A fiery end for the old Tappan Zee Bridge, Stephen Mallon, Popular Science
“The controlled drop was executed at 10:52 a.m., when charges blew out the supports and the 672’ bridge deck and superstructure fell to the river bed, on the eastern side of the navigation channel.
“Steel netting set out on the bottom beforehand will enable a complete cleanup, as remains of the bridge in service from 1955 to 2017 are dissected and removed by barge, according the New York State Thruway Authority. Replaced by the 3.1-mile, $4 billion Mario M. Cuomo Bridge, the old span’s concrete and steel is being recycled or used on artificial fishing reefs off Long Island.” — Tappan Zee Bridge goes out with a bang, Kirk Moore, Workboat
“The Tappan Zee Bridge was supposed to be quietly dismantled and shipped down the river on barges last September to minimize impact on local marine life. But as the opening ceremonies for the new bridge came to a close, after Governor Andrew Cuomo had driven across the old bridge with his mother, workers heard a “loud pop” from the structure. With the rusty old span declared structurally unstable and off-limits to workers, the only option was to forget about the fish and blow it up.” — New York‘s Tappan Zee Bridge BLOWN UP to make way for the new, Caroline Biscotti, Preston Business Review.com
“Did you see it? What a great video, watching the state blow the Tappan Zee to kingdom come. Never was a bridge more deserving of being blown out of the water. One mighty coordinated explosion dispatched it straight to hell. I watched the replay dozens of times Tuesday and from various angles. It felt so good to see that monstrosity collapse into the Hudson, the skeleton of its superstructure laid low in the salt air, never again to ruin a tire or cause massive delays back into Rockland County.” — Joe Dowd: Exploding with joy as they blow up the Tappan Zee Bridge, Long Island Business News
“When one of the final remnants of the structure that holds this name rich in history, Tappan Zee, was destroyed, it felt like a devastating loss.

“On the surface the new bridge is beautiful and should be celebrated. But it is hard to find the beauty in a structure that threatens to remove the history of our collective past. A name means so much. It leaves a clue in plain sight of a question that should be answered. ” — Tappan Zee demolition reminds reader of the name’s important roots, South Cylinda Whitted, LoHud.com

“Construction on the Tappan Zee Bridge started in 1952. It came down in 2019. Those words right there should have been the most words ever written about this bridge, but as we all know, this was certainly not the case. I tried to ignore everything related to this bridge being replaced over the past few weeks, and could not.
“This was the news story that would not die and for the life of me, I will never understand why? I mean, I’m sure there are engineers out there who get turned on by this sort of discussion. That is fine and completely understandable — it’s their game, their business. They may talk about what a marvel it was when it was built, what a miracle it was that it lasted as long as it did, blah, blah, blah. Why do the rest of you care?” — I Did Not Care About the Tappan Zee Bridge Then and I Don’t Now’, Lou Milano, I95Rock.com
If you missed the spectacle, here is a video courtesy of the New NY Bridge:

If you’re an environmental ally wondering what happens to all the materials, well, there was a plan. The pieces of the bridge were not meant to remain in the Hudson as buried treasure. Instead, as we’ve written previously, demolition charges were used to deliberately fail vertical members of the remaining east span, allowing the TZC demolition team to safely lower the old bridge eastward, away from the main navigation channel. Marine salvage experts will now spend the next few weeks remove the material from the river. The steel will be recovered with the assistance of chains, previously laid on the riverbed.
Gothamist, though, reported that not all of the debris landed in the nets, as intended — to which the Town of Irvington responded, “The contractors on the bridge are well aware that it is their responsibility to clean it up and they’re doing it right now. We are overseeing things to make sure it’s done right.”
The old bridge is one step closer to its demise, but the battles over the new one may be just beginning.