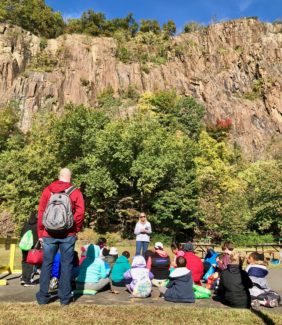 Diana Cutt, EPA hydrogeologist about the Palisade rocks with Liberty School fourth graders on the plateau

Rocks were dynamited loose from Hook Mountain, then crushed into trap rock by steam-powered engines 120 years ago in the Upper Nyack quarry that became Nyack Beach State Park. This year, at the same location, Nyack School District fourth-graders learned about how those rocks were formed, along with local fish, plants, and animals, in an exciting hands-on, outdoor science program. The single-day field trip was the brainchild of two local non-profit organizations, the Outdoor Science Alliance (OSA) and The Friends of Rockland Lake and Hook Mountain (the Friends), working in conjunction with the Nyack School District.
“The Nyack School District is extremely fortunate to operate within a community that places a high priority on the education of its children,” said Nyack School Superintendent Dr. Montesano. “The ‘Hooked on Hook Mountain’ learning project is nothing short of a magical partnership with the Outdoor Science Alliance, Friends of Rockland Lake, Hook Mountain, Nyack Center, and our school district.”

How the Outdoor Science Field Trip at Hook Mountain Came About

The Outdoor Science on Hook Mountain program began with the idea that Nyack Beach and Hook Mountain are perfect laboratories for science education. OSA and the Friends worked together on a two-phase pilot project to explore ways that students can master curriculum topics using their senses. The first phase began in June 2018 in each of the three Nyack School District elementary schools. Utilizing the school yard, volunteer scientists guided third grade students through four outdoor stations: geology, local plants and trees, basic orienteering, and live animals.

Encouraged by strong student engagement, the second phase was implemented in October at Nyack Beach State Park. The students, now fourth graders, went on the science field trip with each school going to the park on a separate Friday. Students brought their lunch, a field guide, water, and a pencil in their backpacks.  Everything else was provided by OSA and the Friends including volunteer parent scientists manning three different science stations at the beach, on the plateau, and on the trail between the two.

Involved with the development of the Outdoor Science on Hook Mountain program from its inception, the Outdoor Science Alliance was formed with the mission to get children outside into the “laboratory” of nature to learn and problem solve. OSA grew out of a program in 2006 started by Diana Cutt, a hydrogeologist with the EPA with the goal of getting kids outdoors to experience science in their local environments. The program attracted other parent scientists and grew in scope through the years. By 2013, the group was a committee of the PTA named Science Outdoor Learning (SOL) program. By 2015 the group was an independent non-profit named SOAR that was renamed OSA in 2017 to avoid confusion with other groups similarly named 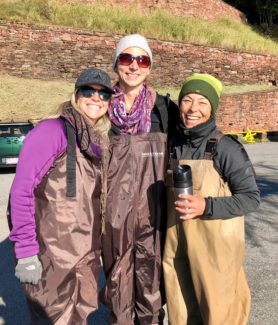 OSA is sponsored by the Nyack Center, and OSA participates in a number of Nyack Center programs including its after-school program. The OSA steering committee is staffed by seven volunteers, all of whom have children in the school district.  Joining Diana Cutt are co-chairs, Elizabeth Co, a wildlife biologist and clinical social worker, and Sarah Laird, an ethnobotanist. Steering committee members include Dr. Nikki Dabi, a paleoclimatologist and professor at William Paterson University, Lindsay Obrig, educational curriculum developer, Travis Brady, an outdoor science educator at Greenburgh Nature Center, Vanessa Ploski, from the Mosaic Design Group, and Melody Partrick, recreational Director for the Village of Nyack. A full complement of school coordinators and environmental educators rounds out the group.
As explained by Liz Co, OSA believes that directed outdoor experiences inform everything else that kids learn by instilling educational, scientific and social awareness values. OSA conducts a full array of programs for children including chick hatching and growing plants from seed. During the field trip, kids develop their sense of wonder in the world around them, their scientific leaning, and stewardship of local parks. OSA is looking to build a sustainable group in the future with multiple programs developed in concert with the schools.
?

Encouraged by strong student engagement, the second phase was implemented in October at Nyack Beach State Park. Each school’s now fourth graders went on a science trip to the park on a separate Friday. Students brought their lunch, a field guide, water, and a pencil in their backpacks.  Everything else was provided by OSA and the Friends. The Friends financed the school buses to take children to the park, field guides, and curriculum development. OSA provided curriculum developers and  volunteer parent scientists manning three different science stations at the beach, on the plateau, and on the trail between the two.

OSA was formed with the mission to get children outside into the “laboratory” of nature, to learn and problem solve. Liz Co, OSA steering committee co-chair, explained to me that OSA believes that directed outdoor expereinces inform everything else that kids learn by instilling educational, scientific, and social awareness values.

Casey Keefe, Ashley Curtis, and Liz Co from OSA take a break from seining the Hudson.

The Friends of Rockland Lake and Hook Mountain

The “Friends” is a nonprofit group dedicated to preservation of the history and natural resources of Rockland Lake, Nyack Beach, and Hook Mountain. According to Bob Stien, board member of the Friends, the outdoor science program fit its goals perfectly. Exposing students to the three nearby parks, many of which have not been visited by the students, makes a lasting impression and bond between people and parks.

The Hooked on Hook Mountain Program

Three science stations were set up at Nyack Beach State Park. Each station was set up for a different hands-on scientific experience.

A cohort of students assembled along the beach near the parking lot. Half of the students walked down to the sandy beach where volunteers waded out into the Hudson River with a seine net. Students watched two volunteers in high waders move the seine in an arc and bring it to shore. Students were allowed to discover what was there. Seaweed, small fish, crabs, and eels brought squeals of delight. The catch was brought up to fish tanks set on park tables for the rest of the students to observe. Students identified fish by their fins and made sketches in their booklets.

Guided byplant and wildlife specialist Edward Michalski’s students walked up the Zigzag trail, so named for the multiple switchbacks it makes as it gently ascends from the beach to the plateau above. Together, they talked about animals and plants in the area. They discussed trees, leaves, stone outcroppings, and fossils while they walked. 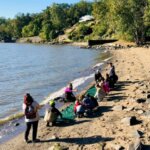 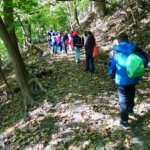 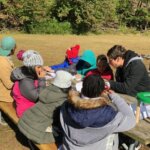 The Nyack Beach plateau is a large flat area that was carved out of the mountain during quarrying in the early 20th century, exposing the local geology. Students got a chance to look through a magnifier at the little “rocks” that make up sand. They also hammered rocks to experience the difference in hardness between sedimentary and igneous.

A Field Trip to be remembered

Engagement was high during the field trip. Hands went up when volunteers asked questions. Laughter and squeals of excitement echoed on the shores and in the woodlands. Naturally curious kids, many of whom were visiting the park for the first time, were the embodiment of Benjamin Franklin’s maxim, “Tell me and I forget, teach me and I may remember, involve me and I learn.” Here is hoping that Outdoor Science on Hook Mountain will be an annual event.
See also

Photo credits: Mike Hays
Michael Hays is a 30-year resident of the Nyacks. He grew up the son of a professor and nurse in Champaign, Illinois. He has recently retired from a long career in educational publishing with Prentice-Hall and McGraw-Hill. Hays is an avid cyclist, amateur historian and photographer, gardener, and dog walker. He has enjoyed more years than he cares to count with his beautiful companion, Bernie Richey. You can follow him on Instagram as UpperNyackMike.

Nyack People & Places, a weekly series that features photos and profiles of citizens and scenes near Nyack, NY, is brought to you by HRHCare and Weld Realty.
In this article:hook mountain, Liberty school, nyack beach plateau, nyack beach state park, Outdoor Science Alliance, the friends of rockland lake and hook mountain, The Nyack Center