Once upon a time, all garbage, like all politics, was local. But that started to change in the 1990s. Municipal landfills in Rockland County, and all over New York State, began closing. Trash was re-routed to regional mega-landfills that met federal environmental standards for controlling runoff and toxic leachate. Recycling and other waste diversion programs were developed to help protect the environment.

In response, in 1994, the Rockland County Waste Management Authority (rocklandrecycles.com) was created with the goal of maximizing waste reduction, reuse, and recycling. The RCSWMA’s first new building, housing the Materials Recovery Facility (MRF) and administrative offices in Hillburn, was dedicated in 1998—the same year that Rockland’s last landfill shut down.

To mark this 20th anniversary, RCSWMA Education Coordinator Kerri Scales, and her Public Information Specialist colleague Jackie Dodrill were looking for a way to mark the occasion. Dodrill happened on some eye-popping drone video of the Mario Cuomo Bridge. The filmmakers, Flying Films NY, were local, and she rang them up immediately.

The collaboration produced a three-minute video, combining aerial and some ground footage, showing each of the county’s 11 waste and recycling facilities, at five locations. “The bird’s-eye view was such a natural choice,” said RCSWMA Executive Director Anna Roppolo. “There’s no other way to comprehend the scale and the scope of the services that the Authority provides.”

The entrance to this sprawling multi-facility location (the RCSWMA’s largest site) is on Route 303, just south of the Palisades mall. Trash collection trucks tip their loads here—it currently costs $76 per ton for both commercial and municipal collectors. Scrap metal is extracted, and the garbage is then transferred to 40-ton waste haulers for the 320-mile trip to upstate New York (and a 320-mile empty trip back). All garbage is weighed, coming in and going out. Residents and contractors can also drop off trash here. 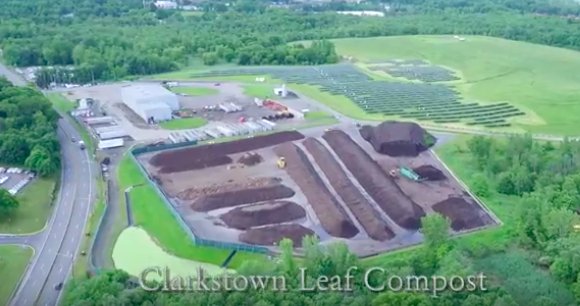 The Clarkstown Leaf Compost facility. The solar panels belong to the Town of Clarkstown.

When you think you can “smell the landfill” near the Palisades Mall, you’re actually smelling the leaf compost at the Clarkstown location after a load of high-nitrogen grass clippings has been added. “Watering, fertilizing, mowing, and sending the grass clippings away is a vicious cycle of suburban craziness,” according to Kerri Scales. This cycle is why the RCSWMA encourages “grasscycling”—leaving grass clippings on the lawn.

Here’s where the larger yard waste items, like tree branches, are brought to be processed into mulch. Some finished compost and mulch are given back to municipalities, and the rest is sold to bulk users.

All Rockland’s yard waste facilities process over 52,000 tons of material per year.

Municipalities, contractors, and residents bring waste concrete and asphalt here. There is a fee, which varies depending on the kind of material.

A private company markets the crushed asphalt within the county for use in road and construction projects. The county sells the concrete—processed to various sizes—to builders and landscapers. The facility’s expenses are covered by fees, and materials sales earn revenue. Add to that the avoided high cost of sending these heavy materials to a landfill. 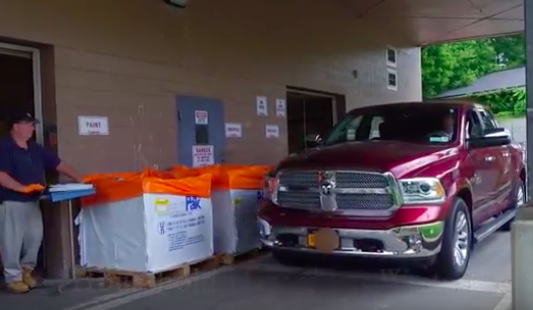 Residents can stay in their cars as workers remove and process hazardous household waste. The facility in Pomona is free for residents to turn in e-waste and household hazmats. Photo courtesy RCSWMA

The HHW in Pomona, which accepts over 1 million pounds of e-waste alone each year, is one of only 14 such permanent facilities in New York State. Most counties collect hazardous waste only a few times a year, and charge a fee. Because it’s a permanent facility it receives state funding, via the Department of Environmental Conservation (DEC). And as a result, the HHW is always free for residents to use.

Though it doesn’t produce revenue, the HHW does avoid environmental pollution. Some materials, like paint, can be reused or sold. Electronics are sent off to remanufacturing facilities. Unwanted medications are accepted, but controlled substances can only be dropped off on weekend collection days.

(Hours are Monday through Friday, 8a to 1p, and select weekends. See the full schedule and list of acceptable materials on the rocklandrecycles site.)

This is the smallest of the county’s three transfer stations. It only accepts trash, which is weighed and loaded onto trash haulers, just as it is at the Clarkstown facility. This station also serves as a collection point for marine wrap recycling in the spring. 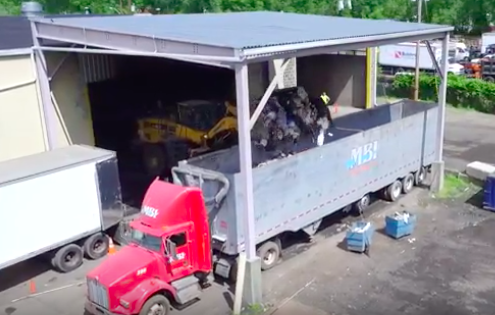 Trash haulers at the county’s three regional transfer stations are loaded before driving 320 miles to upstate landfills, which are quickly filling up. Image courtesy RCSWMA

Incoming collection trucks are weighed here at a separate scale building before proceeding to the transfer station to drop off trash. Landfill-bound trash haulers are weighed as they exit the facility. Like all transfer stations, scrap metal is extracted from waste before it’s loaded onto haulers for the long ride upstate.

Rockland’s three regional transfer stations process over 228,000 tons of municipal solid waste (some of it from outside the county) every year.

This leaf compost facility has just been closed down. It was a bit too close to a neighboring shooting range for safety.

Wastewater biosolids are processed in several stages. Only a video drone could get this shot inside the long aeration building. Drones are beginning to be used for measurement and calculation tasks in recycling and materials processing. Image courtesy RCSWMA

Affectionately know as the CoCo, this facility accepts over 25,000 tons per year of preprocessed biosolids, trucked in from the county’s six wastewater treatment plants. Clean wood waste is ground down and added to the mixture as a bulking agent. The biosolids are aerated and agitated by big green machines in long bays. The mix is then cured, screened, and put into long term storage. The resulting “soil amendment” is sold by the truckload for landscaping. (It can’t be used for agriculture in New York State.)

Scrubber stacks clean the air as it’s leaving the facility, and a “solar wall” saves energy by transferring heat into the plant to speed drying and curing.

This facility produces revenue from material sales, and avoids the considerable cost of trucking waste and paying upstate landfill fees.

A permit modification has just been obtained by the RCSWMA to allow the addition of food waste. Acceptable non-contaminated sources are being investigated now.

The back of this multi-purpose building is the MRF (pronounced “murf”). Trucks are weighed; they unload mixed bottles and cans on one side, cardboard and paper on the other. Conveyor belts bring those materials into rooms where most of it is sorted by hand (the most cost-effective solution right now). Machine-jamming plastic bags and non-recyclables must be removed before further processing. Two baling machines package materials for shipment to a remanufacturing facility.

The RCSWMA works with a number of reliable companies, both domestic and foreign, to market their materials. Rockland resisted the “single-stream recycling” fad some years ago and stuck with the cleaner dual-stream approach to avoid contamination and fetch a higher price for recyclables—a move that has paid off for the county. Kerri Scales noted that Chinese companies are starting to open recyclables processing plants in the U.S., a positive development for facilities like RCSWMA. 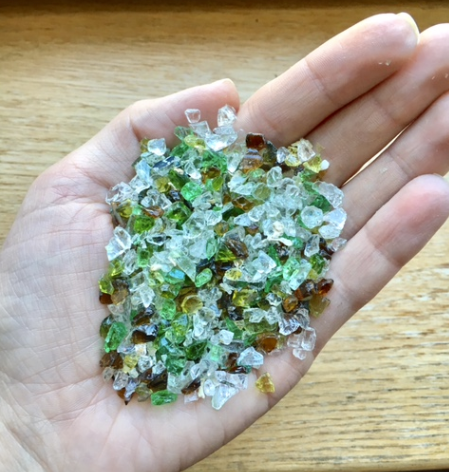 Recycled glass is crushed into an aggregate material that is available free of charge to county builders. Photo courtesy RCSWMA

Recycled glass containers are hard to sell, so the county now processes them into a glass aggregate product, and gives it away to contractors to use for pipe bedding or other construction applications.

Since it opened in 1998, the EEC has been greeting over 3,000 visitors annually, from kindergartners to senior citizens. The RCSWMA’s first chairman, Herb Reisman, was a teacher, and he wanted county residents—and especially its schoolchildren—to learn about what was happening at the MRF.

Visitors watch a video about the recycling process, talk with an educator, and tour the MRF through viewing windows to see recycling in action. Hands-on exhibits then drive home the point that there really is no “away” for the mountains of stuff we mindlessly toss each day. Visitors become reduce-reuse-recycle ambassadors in their homes and schools. “They leave here knowing that they can make a difference, which is something that everyone in the county can do,” said Jackie Dodrill.

Enjoy the aerial tour? Back on the ground, here’s how you can help keep Rockland County clean and green, while reducing expenses for your county and municipality. And that means lower taxes for everyone, too.

Remember that garbage is expensive in every way. The county has to pay workers, truckers, and distant landfills to deal with trash, and they pass that cost of $76 per ton along to Rockland’s private and municipal collectors. In the end, you’re the one who’s stuck with the bill. And rubbish is rough on the environment too, with a daily parade of diesel-guzzling 18-wheelers hauling it to overflowing landfills that make life miserable for their neighbors in the beautiful Finger Lakes region. 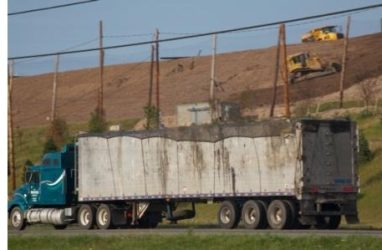 The answer? Make less trash. Don’t buy overpackaged items or things you don’t really need. Don’t waste food. Zero-waste enthusiasts manage to whittle their garbage output to almost nothing. If they can do that, we can do better.

Remember that recycling comes after “reduce” and “reuse.” Markets for recyclables are getting more selective, so keep your recyclables clean, and separate containers from paper recycling. Clean, well-sorted recycling brings more money back to the county, which passes $35 per ton back to the collecting town or village. 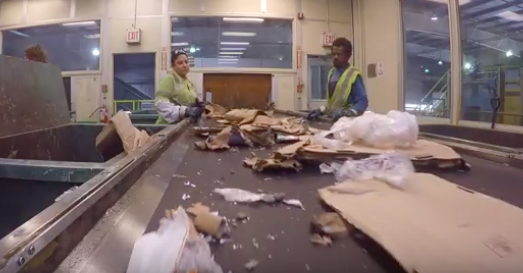 Workers sort recyclables by hand at the MRF. Plastic bags pose a hazard, and must be removed along with other non-recyclables. Image courtesy RCSWMA

Keep plastic bags out of the recycling. It gums up machinery at the MRF and costs time and money to remove. And please, no “wishcycling.” You may think that broken plastic baby doll should be recyclable, but it’s not. And it costs the county money to fish out non-recyclables and truck them back to the transfer station. Stick strictly to the published list of recyclables. If you can’t fix it, reuse it, recycle it, or donate it, just grit your teeth and toss it into the trash. 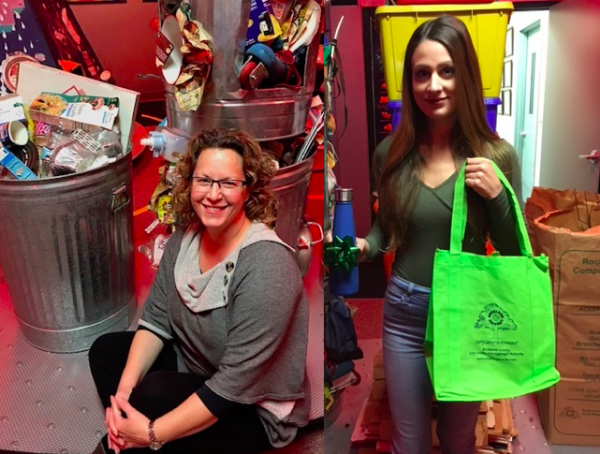 Kerri Scales and Jackie Dodrill with the exhibits and environment-sparing reusables in the Environmental Education Center. Photo: RCSWMA 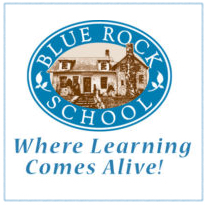