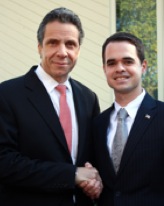 Nyack, Nov 6 — In a rematch of the 2010 election campaign, David Carlucci (D) was re-elected to the NYS Senate representing Rockland County and Ossining, defeating former Rockland County Executive Scott Vanderhoef (R). New York Governor Andrew Cuomo (D) coasted to victory, defeating his Republican rival Marc Molinaro (R). Orangetown voters chose Rosaanna Sfraga (R) over Robert Tompkins (D) as Town Clerk.
Voters also gave Congresswoman Nita Lowey and Assembly members Ellen Jaffee and Ken Zebrowski the nod for another term. Democrats Lowey and Jaffee received 66% and 65% of the votes cast. Zebrowski (D) ran unopposed.
After surviving a strong challenge in the September Democratic primary from first time candidate Julie Goldberg, Carlucci breezed to a victory over Vanderhoef winning 65% of the vote.
Rosanna Sfraga rode a narrow three point cushion (622 votes) to win the Orangetown Town Clerk race, besting Robert Tompkins, 51.6% to 48.4%.
History that was delayed in New York is about to become reality for NYS Senator Andrea Stewart-Cousins. With Democrats now in control of 35 of 63 seats in the NYS Senate, Stewart-Cousins is likely to be the Senate’s next majority leader, the first African American woman to lead either the NYS Assembly or the NYS State Senate. Previously, Stewart-Cousins lacked the support required to be majority leader because the Independent Democratic Conference (IDC) and Brooklyn Democrat Simcha Felder had caucused with the GOP.
Andrew Cuomo will follow in the footsteps of his father Mario, winning his third term as governor of New York. Cuomo won with 59% of the vote,  defeating Republican Marc Molinaro (37%). Cuomo was a little less popular in Rockland County, winning only 53% of the vote.
US Senator Kirsten Gillibrand (D) was re-elected, routing challenger Chele Farley (R) 64%-33%.
Challenger Anthony Delgado (D) defeated incumbent John Faso (R) in the 19th Congressional District, 49% to 46%.
Nyack Village Trustees Louise Parker (D) and Donna Lightfoot-Cooper (D) ran unopposed and were re-elected to another two year term on the village board. It wasn’t entirely smooth sailing, as 40 votes were cast for write-in candidates and 1,257 of the 4,047 (31%) ballots cast were “under votes,” meaning no vote was cast for one or both trustees.
Democrat Richard Owen Burns received 72% of the votes in the Piermont Trustee race, defeating Independent Nathan Mitchell.