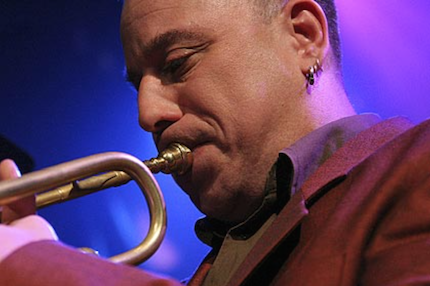 The Virtuoso Slide Trumpeter Shows Off His Historic Collection of Americana

by Chris Stanton
Steven Bernstein built his storied career by doing everything at once. An acclaimed trumpeter, composer, arranger and bandleader, Bernstein cut his teeth in the eclectic late-’70s New York scene, where audiences demanded a wide-ranging setlist.
“I come from a generation where walls were being brought down,” Bernstein says when I visit him in his South Nyack home, crediting his varied career to the popularity of disparate genres and sounds in the 1970s. In a recent residency at The Stone in New York City, Bernstein trotted out six of his different bands over the course of a week, as if to prove that variety remains the one constant in an ever-evolving career.
“He’s a unique musician,” says Briggan Krauss, who plays saxophone in Bernstein’s long-running Sexmob project. “In every project I’ve been involved with him, he’s been himself.” Sexmob’s new album, Cultural Capital, seems designed to reaffirm this point, and is the first of the subversive jazz quartet’s releases to be comprised entirely of Bernstein’s original compositions.
After four decades of establishing his musical legacy and crossing paths with cultural icons, Bernstein has become something of a music historian. His memory alone houses an encyclopedia of priceless anecdotes, including collaborations with Quincy Jones, nights on the town with Sonny Simmons and encounters with Courtney Love. (When asked of the latter, Bernstein shrugs, “You can imagine.”). Mementos from these experiences have piled up over the years, and Bernstein’s home studio in Nyack now resembles a personalized, jazz-themed Library of Congress. 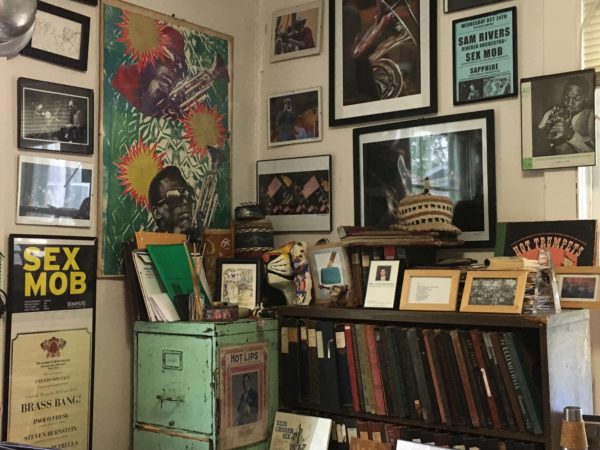 “I’m a collector, and people know I’m a collector,” Bernstein explains. “So they give things to me, and I have more things than I have space for.” The musician took the time recently to show off this vast collection to Nyack News and Views, explaining the order behind the madness of an artistic space that might appear cluttered to the untrained eye.
As one might expect of a jazz connoisseur’s studio, vinyl records overflow from a wall-to-wall bookshelf, partially arranged in alphabetical order. Endless sheet music fills cabinets while carefully arranged instruments cover the floor, leaving a thin but visible path around the room. One collection, though, remains cordoned off from the rest: a rare assortment of 78s, dating back to the early days of recorded music. After reluctantly buying the whole collection from a friend, Bernstein now values the fragile records above most of the other items in his studio. “I kind of feel like I’m preserving American history,” he says. “There’s stuff here that might not exist anywhere else.”
When Bernstein makes his way around the studio, his far-reaching impact on the worlds of live and recorded music only becomes more apparent. When asked about a Lou Reed compilation book casually piled atop a record stack, he flips it open to a two-page spread dedicated to none other than Steven Bernstein, complete with a handwritten note from the Velvet Underground legend himself. Elsewhere, “Thank you” notes litter the walls. Closer inspection reveals signatures by the likes of filmmakers Robert Altman and Woody Allen, thanking Bernstein for his arrangements in 1996’s Kansas City and 2012’s To Rome with Love, respectively. 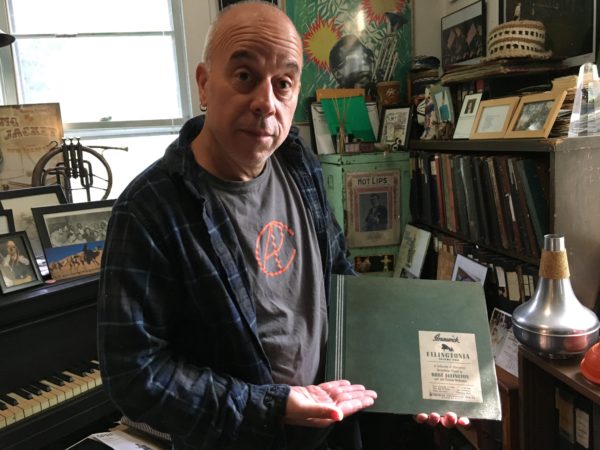 “Music is a weird thing,” Bernstein says. “In that world, for what it is to be famous, I’m famous. There are books here by some of the most famous jazz writers that have chapters on me. But that doesn’t mean anything when you don’t have a regular job. A lot of musicians, they have nothing when they stop working.”
As much as his wide-ranging taste, this workman’s attitude has driven Bernstein’s restless career. When asked how he manages so many projects at the same time, he simply retorts, “I don’t have a choice.” While this variety of work allows him to defy easy categorization, Bernstein has developed a few stylistic trademarks over the years–namely, his unique mastery of the slide trumpet.
A collection of trumpets remains the centerpiece of Bernstein’s home studio. Slide trumpets–the instrument that Bernstein uses to front Sexmob–comprise at least half of the assortment. Each has a story, beginning with the slide trumpet that introduced him to the instrument in 1977, bought impulsively from a guitar shop in Woodstock. Others come from less humble origins, whether inherited from a member of the legendary Canadian Brass group or acquired from a retired agent of the British government.
“The thing about trumpets is, they’re not actually that expensive,” Bernstein says, gesturing toward the collection. “These are basically the price of one saxophone. And these are some of the most famous trumpets.”
While Bernstein’s home studio houses a few priceless artifacts, it is a space devoid of hierarchy, where a vintage psychedelic Playboy cover might (and does) hang next to a New Yorker caricature of the trumpeter and his band. Above all, though, it is a space defined by variety and a religious appreciation for music-–not unlike Bernstein himself.

Chris Stanton is a Cornell University alum. This article was originally published July 9, 2017.