It was deja-vu all over again on a recent Sunday in front of the Aluf Plastics on route 303 in Orangetown.

Aggravated neighbors of the sprawling, half-million square-foot plastic bag factory on the Blauvelt-Orangeburg border near Route 303 picketed on September 23 to protest irritating chemical odors that invade their homes, neighborhoods and their children’s schools—odors that they attribute to Aluf’s 24/6 operation. They also wonder what harmful emissions might lurk in those nasty smells, which have been described in complaints as “burning plastic,” “chemicals,” and “perfume.” That question has by no means been answered to residents’ satisfaction.

The real odor complaints began several years after Aluf moved into its Orangeburg facility, at 2-10 Glenshaw St., in 1986. At first occupying just 100,000 square feet of the ramshackle old industrial complex, Aluf quickly ballooned to its current size during the early 2000s, and the odor complaints grew apace. Rockland County originally had jurisdiction over industrial air emissions, but handed off that responsibility to the N.Y. State Department of Environmental Conservation (DEC) in 2012 in a cost-cutting move. Since then, a group of concerned residents—930 to date—have banded together in the grassroots Clean Air for Orangetown (CA4O) to encourage action by both the DEC and their town in an effort safeguard the health and the habitability of their suburban neighborhood.

Can plastic manufacturing and suburban life coexist? Decades of disappointment have left residents skeptical. But Aluf’s neighbors now see a glimmer of hope in recent initiatives by the Town of Orangetown. “At least it’s movement,” according to Dan and Allyson Sullivan, who are members of CA4O and live near the plant.

Town of Orangetown Supervisor Chis Day, who took office last January, has put the Aluf odor issue high on his to-do list, and has worked with the Town Council toward remedies. In his 9/25/18 “Aluf Report,” Day reported that the company is putting up resistance to further odor-reduction measures. For its part, Aluf’s lawyers point to Day and Orangetown as unjustly “on the attack” against the company. Earth Matters asked Supervisor Day to bring us up to date, and to describe how the new personnel and monitoring equipment aimed at remediating Aluf odors will also benefit the town’s environment.

EM: When the DEC was inspecting Aluf on 9/21, there was only one odor complaint logged. But the day before that there were many complaints. What is the best hope that Orangetown can offer Aluf’s neighbors as to any nuisance odors being detected and confirmed regardless of whether the DEC is in town or not?

CD: The town has acquired new olfactometer equipment, which will be used by the Public Health Engineer and code enforcers to collect data and detect air quality patterns in the area surrounding Aluf’s facility. At a frequency that is deemed appropriate by the town (which would not necessarily coincide with scheduled DEC visits) the town will be collecting and analyzing the information to measure the effectiveness of current compliance requirements. The town will work in conjunction with the DEC to adjust compliance requirements and performance standards as necessary. The use of this new equipment will allow enforcers to detect objectionable odors that rise to nuisance levels and, if warranted, to issue written citations which could result in the accumulation of fines on a daily basis. 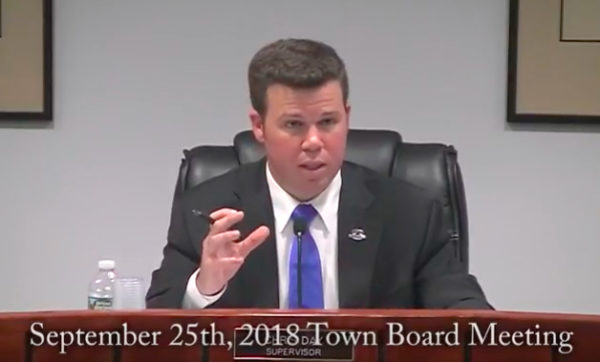 Orangetown Supervisor Chris Day describes the town’s upcoming initiatives to stanch the stench that the DEC and aggrieved neighbors attribute to the Aluf plastic bag factory. Image: Town of Orangetown via Youtube

A Public Health Engineer? Is that a new position?

Yes. Orangetown’s new Public Health Engineer started work nearly two weeks ago and just completed training to use the town’s new olfactometers along with our code enforcers. The new employee will assist the DEC throughout their inspections/site visits and also have the ability to swear an affidavit to the code enforcers when odors reach nuisance levels. They will be helping the town as necessary to issue valid citations which could result in the accumulation of fines.

The DEC investigated and cited Aluf for odor violations in 2017. Aluf says that it investigates all complaints, but does Aluf take responsibility for the odors detected near its facility?

In a statement to Earth Matters this week, Aluf spokesman, Attorney John-Patrick Curran, of the law firm SIVE, PAGET & RIESEL P.C., said that “Aluf operates in an industrial corridor with dozens of other business that are potential sources of odor. Therefore, we reject the common assumption that odors being complained of are coming from Aluf.”

It seemed like Aluf was, after lengthy delays, finally going along with the DEC requirements for odor management remediation. Where is all that now?

We were hoping that Aluf would cooperate. They said they were going to voluntarily submit some well-thought-out redesigns with respect to their odor management control plan for the town’s review, but they have since backed off their commitment. Even so, we haven’t lost any time in our efforts. After all, it was essential that we go through the process of updating the Performance Standards section of the Town Code in reference to this matter. It was also essential to hire an expert engineering firm to review the entire Aluf situation, which we have done. The engineers are now ready to begin their review. The firm is expected to play an integral role in helping to devise a mechanical redesign plan for Aluf’s facility, a detailed analysis which they will then provide to the Zoning Board of Appeals (ZBA) for review and decision. 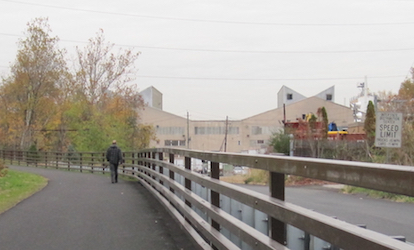 The new Joseph B. Clarke rail trail in Orangetown and Blauvelt passes between the Dominican College campus and the Aluf plant (right)

What hope can you offer to residents, who’ve been struggling with Aluf odors for so long, that this time is different?

We now have all of the things we need, and are capable of actually dealing with a situation like this. It is this series of changes—updated laws, new technology, new personnel, new tracking systems via our online complaint form, new Air Quality Review Committee, and more—that should give residents hope.  Also, despite its being a continuing issue, total complaints are down substantially after a series of openings in the roof were closed at our suggestion.  So we can point to our increased capabilities and a record of getting things done to indicate that we will continue to see success.

Bottom line: We are attacking this situation on all fronts.  What’s more, the DEC is fully engaged. Through continued analysis of the odor complaints received, we believe that we have already found a positive correlation between the DEC’s current time requirement to change out carbon filters and the frequency and strength of odors. The town will work with the DEC to adjust that requirement as necessary. 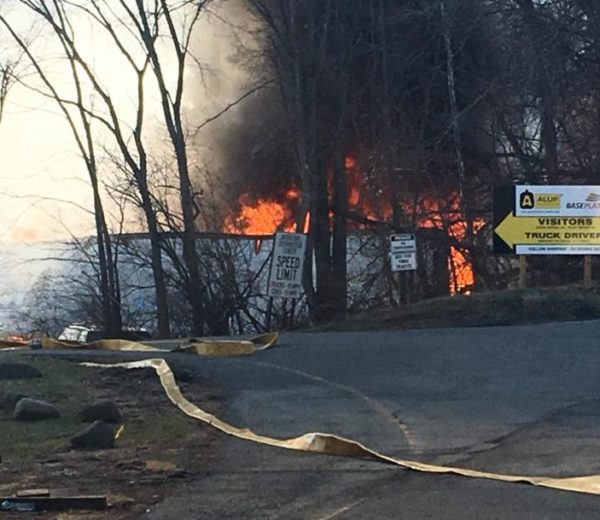 On February 27, 2018, four tractor trailers caught fire on Aluf property, outside the factory. One firefighter was injured and taken to the hospital, according to Orangetown PD. Photo: Clean Air for Orangetown via Facebook

The town has made some substantial investments. Could they help other businesses be good neighbors, and also protect the environment in the rest of Orangetown?

We hope that residents will take notice of the work we are doing to elicit compliance on behalf of the town’s residents, and that this situation will serve to make the rest of the business community think twice about how their course of business would affect the greater population. Our online complaint form for air quality and odors has made it possible for both the town and DEC to identify patterns, implement fixes, and track the results of any fixes. This resource is already being deployed to address other resident issues, such as odors from the County Sewer Plant and the Metro North line in Pearl River.

The environment continues to play a crucial role when it comes to the quality of life here in Orangetown and it is considered with every decision made. My administration’s implementation of an Air Quality Review Committee, staffed by experts from inside and outside of government, and our strong stance on performance standards for industrial users in the Town, have demonstrated a willingness to take immediate action to protect our environment.  I have also advocated for a permanent air monitoring station along the Route 303 corridor.

We are also undertaking other environmental efforts. To keep Orangetown clean and green, we work with the Sheriff’s office to target litter patrols, and are starting an Adopt-a-Spot program that has begun to improve our green spaces. We are currently working with the New York Power Authority (NYPA) to install strategically-located electric vehicle charging stations in Orangetown, in order to encourage the use of more fuel efficient vehicles and improve our air quality. We hope that the visibility of these charging stations will further inspire our citizens to gain a sense of personal environmental responsibility.

In a statement this week to Earth Matters, Aluf spokesman Curran, reacted to Orangetown Supervisor Chris Day’s charge on 9/25/18 that Aluf was resisting further odor-reducing improvements at the Glenshaw St. facility. Curran stated, in part:

This latest attack is baffling and disconcerting. Since the Spring of 2018, API Industries, Inc. d/b/a Aluf Plastics (“Aluf”) and the representatives of the Town of Orangetown (the “Town”) have maintained a relationship of open communication and cooperation. It is against the backdrop of that relationship that the Supervisor’s sudden and utterly unfounded allegations against Aluf of “bad faith” are most startling. . . . In the past 24 months, Aluf has invested more than $1 million . . . in measures specifically designed to address and to reduce potential odors for the Aluf operations.  In spite of these efforts, Aluf continues to be portrayed as a bad actor, and that is simply unfair. 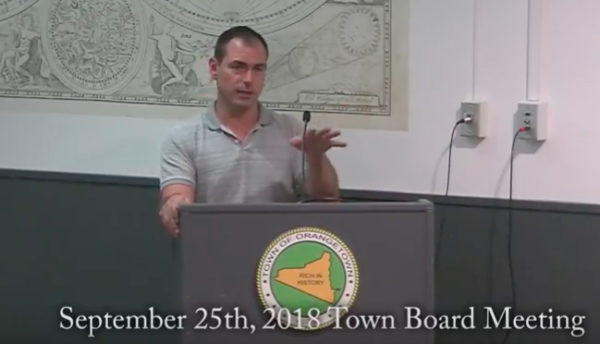 Orangetown resident Vincent Lupi addresses the September 25 Town Board Meeting about Aluf: “It’s constant. It just stinks. I love where I live but I don’t love the smell. . . I hope you all are doing everything you can to stop the smell and stop what could potentially be very dangerous for us.”