by Dave Zornow
On September 13, the Nyack Village Board is expected to reject a recommendation to remove four parking spaces and ease future traffic on Main Street. The proposed plan would add a driveway to a Main Street development project which would require eliminating these parking spots. Residents say the plan would create unsafe traffic conditions for pedestrians; a traffic study came to the opposite conclusion.
According to Nyack’s parking consultant BFJ Planning, there are over 2,500 parking spaces in the Village of Nyack. The four spots on Depew represent less than one percent of all parking (.16%).
A parking and traffic study conducted by the village’s traffic consultant, requested by the village and paid for by the developer, found that the four spots on Depew in question weren’t very important. “The removal of these parking spaces, which are not currently used, will have no impact on parking demand or traffic operations,” wrote Michael Galante, a Managing Principal at transportation consultant Frederick P. Clark Associates.
The Nyack Fire District and the Rockland County Planning Department have also endorsed removing the four parking spaces, citing improved emergency vehicle access and reduced congestion on Main Street. 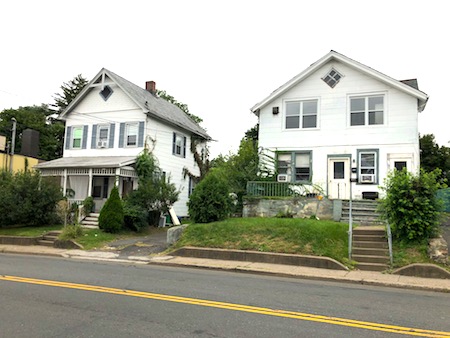 249 & 259 Main Street. JED Realty of New City, NY has proposed turning the two single family homes into a 26 unit apartment complex with an entrance on Main Street and on Depew Ave. The rear exit would require removing four parking spaces on Depew Ave.

The actions of the Nyack trustees will likely increase congestion for the 10,000 vehicles that use Main Street each weekday. If the Nyack Village Board votes to reject the recommendation, they will be disregarding the safety benefits of removing these spots. Most importantly, the trustees’ action will expose the village to a potential “Article 78” lawsuit which Nyack is likely to lose.

By choosing to ignore the traffic and parking consultant’s recommendation without “substantial evidence,” the Village of Nyack runs the risk of an Article 78 proceeding. If that happens and the village loses the case, Nyack taxpayers will have to pick up the legal costs for any party that brings this action.
An Article 78 proceeding is used to appeal the decision of a New York State, City or Local Agency to the New York State Courts. LawNY.org says decisions by a NYS municipal agency can be appealed when the body doesn’t follow its own rules: “[A] court can consider 1) whether the decision was ‘arbitrary and capricious’ or 2) not supported by ‘substantial evidence.’ These words have special legal meanings. ‘Arbitrary and capricious’ means the decision is not reasonably related to the facts of the case. ‘Substantial evidence’ is evidence that a reasonable person would accept as enough to support the agency’s decision.”
By failing to present any substantial evidence beyond the objections of about 20 Depew Ave residents and some generalized community opposition that removing the spaces would be detrimental to the village, Nyack’s trustees are inviting a lawsuit that the municipality is likely to lose. The village’s attorney advised the trustees to make their decision based solely on the results of the parking study to avoid the possibility of having an Article 78 suit brought against the village.

Making Nyack Safer Should Be a Priority And Not An Afterthought

The recently published Greater Nyack Bike Walk Master Plan tallied 52 crashes involving vehicles and pedestrians or cyclists in the Nyack School District between 2015 and 2017. That’s an average of one crash every three weeks. Most of those crashes occurred in downtown Nyack. That eye opening statistic doesn’t include a pedestrian fatality last May at the corner of Main & Broadway.
Nyack’s traffic and parking consultant says removing the spots will make Depew Ave safer for school children, stating “the removal of the four parking spaces…will actually enhance overall safety due to the [substandard] width of Depew Ave,” providing much needed traffic calming for this Main Street bypass. Although residents disagree with this professional analysis, they have offered no evidence to refute the consultant’s finding. 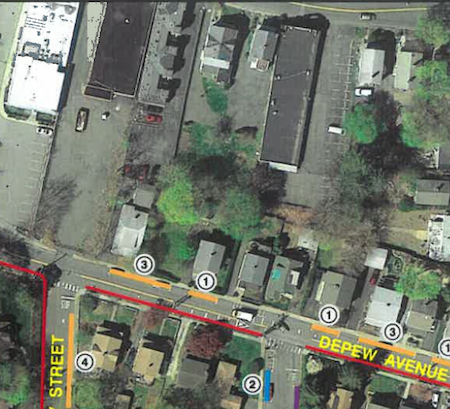 Ignoring An Opportunity To Reduce Congestion

In reviewing a proposed new Main Street housing development that will convert two adjacent single family houses into a 26 unit apartment building, the village’s traffic consultant recommended adding a driveway from the parking lot to Depew Ave. The idea was subsequently endorsed by Rockland County Planning and the Nyack Fire District.
Depew Ave resident Peggy Brady-Amoon says that “the neighborhood is overwhelmingly opposed to the proposal to access the proposed Main Street building via Depew Avenue and the associated application to remove parking.” The concerns of Depew Ave neighbors need to be considered, but Nyack’s elected officials also have an obligation to represent the best interests of the village’s 7,000 residents, its business community, and the 50,000 cars that drive Main Street each week. Nyack resident JC Brotherhood, a former parking authority board member, puts it this way: “Parking is a shared public asset. I am no more entitled to the space in front of my house than the next guy, whether he lives here or not.”

Consistent with the Nyack Comprehensive Plan

The village’s 2016 Comprehensive Plan called for an “increase[d] housing opportunities that respond to Nyack’s changing population, including seniors and young adults” (p186) and “develop a plan to better coordinate public and private parking lots to improve efficiency and aesthetics” (p187).
There’s a housing shortage in Nyack for affordable rental units that are walking distance from downtown shops and mass transit stops. The 26 units proposed for Main Street would seem to be a modest step in a direction previously endorsed by the Nyack Village Board. The Comprehensive Plan also calls for increased walkability, adding sidewalk amenities and the removal of curb cuts–none of which are possible with only Main Street access to this proposed project.
Parking is always a concern in the Village of Nyack; so is over development. However, the facts don’t support the contention that these spots are needed by the neighborhood. Elected leaders need to make sound decisions that follow the guidelines of Nyack’s Comprehensive Plan, look out for the safety of all of its citizens, and heed legal advice to avoid lawsuits which waste tax dollars.
See also:

In this article:complete streets, parking