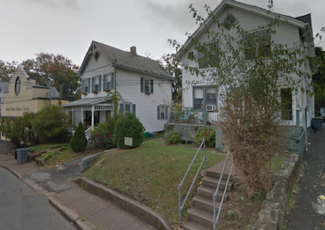 This section of Depew Avenue, like most of Depew Avenue, and nearby streets including Anna and Crosby Streets, is entirely residential. It’s a diverse, densely populated neighborhood characterized by older homes with minimal off-street parking, where newcomers and long-timers, renters and homeowners, live side by side. In this context, public on-street parking is critically important. The developers applied to eliminate four parking spaces to build their project with Depew Avenue access.
This is not a simple matter of choosing between Main Street and Depew Avenue access for this proposed Main Street project. Upper Main Street is in the relatively new DMU-2 zone and this section of Depew Avenue is in the TFR, a one- and two-family residential zone. It’s about protecting a residential neighborhood consistent with zoning and the Comprehensive Plan, not adding to neighborhood traffic volume, and the safety of large numbers of pedestrians, middle school children, who walk this way on a regular basis.
The neighborhood is overwhelmingly opposed to the proposal to access the proposed Main Street building via Depew Avenue and the associated application to remove parking. Numerous people have written letters and emails and spoken out at village meetings. The large majority agree that the proposal for Depew Avenue access for a Main Street building is a terrible idea.
The village board deserves credit for studying and considering the developers’ application from multiple perspective They commissioned Michael Galante of FP Clark Associates to do parking/traffic study of Depew Avenue, Crosby, and Anna Streets. They invited neighborhood residents to share their observations and experiences, recognizing that people who live in an area often know much more about the area than is possible for any outside consultant/observer who, by definition, comes into a neighborhood for short-term assessments then leaves. To round this out, several village trustees made their own observations.
From a research perspective, there are significant limitations to the parking/traffic study and report. For example, Mr. Galante wrote that the purpose of the study was “to provide the appropriate Stopping Sight Distance (SSD) to accommodate the proposed access drive to the subject property” (p. 1). This led to his consideration of the impact of the proposed removal of parking on Main Street businesses and the downtown area – but not the residential character of the neighborhood that would be affected. It concludes, as expected, with Mr. Galante’s confirmation of his prior recommendation to remove the parking – to make way for the “proposed access drive” (p. 1).
At the same time, the report also reads that “An evaluation of the area near Depew Avenue, Anna Street and Crosby Street indicate it is fully developed with residential homes, without any potential to add new parking demand” (p. 4). This observation confirms our concerns about the additional neighborhood parking demand that would be generated by the proposed development with Depew Avenue access.
On July 12, the Village Board decided by consensus to draft a resolution to deny the developers’ application to remove public parking for private profit and protect the Depew/Crosby/Anna neighborhood and Nyack. Kudos to Deputy Mayor Louise Parker, Trustee Donna Lightfoot-Cooper, and Trustee Elijah Reichlin-Melnick for trusting their own as well as residents’ long-term observations and experiences and publicly stating their intention to deny the application to remove parking on Depew Avenue. We encourage them to remain firm in their decision and vote to deny the developers’ application to remove the parking at the formal vote on September 13. We also encourage Mayor Don Hammond and Trustee Marie Lorenzini, who were clearly listening yet undecided at the July 12 meeting, to join with them to for a unanimous vote to deny the application to remove parking.
There is so much good about Nyack – let’s keep it that way and make it better!
Main Street projects should stay on Main Street! Protect residential zoning!