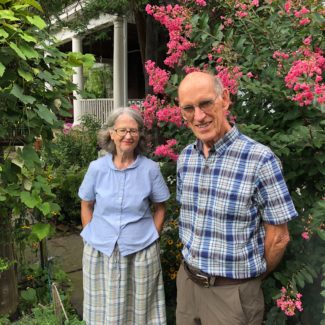 England brought Win and Betty Perry together for the first time. They went to a student co-op mixer in September of 1957 at University of California, Berkeley. Win had spent the summer cycling in England, Scotland, and Wales. Betty’s father taught Air Force dependents in England. A friend of Betty’s noticed the common subject and introduced them. The next day they went for a walk… and now, nearly 61 years later, they are together so often in Nyack that a friend calls them off track betting’s favorite couple: Bet and Win.

Win and Betty at Berkeley

Winston Churchill Perry, Win’s father, was named after a well-known American author of the time (and not the Prime Minister of England) who spent summers in Nyack and played checkers at Win’s grandfather’s store in Upper Nyack. Win, meanwhile, graduated from Yale and, an ROTC student, he entered the Navy upon graduation. Navy boats were a lot different than the Lightning sailboats he loved to captain growing up in Nyack. The first day on board he injured his knee on a ladder, and he was out of the service for good. He had always loved architecture, and he decided to start over and earn a second degree.  Having never been west, he applied to Berkeley, was accepted, and ventured west. 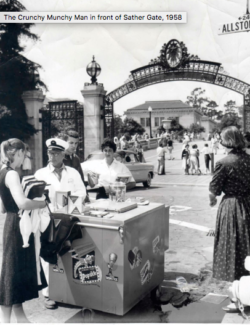 Betty Pinneo (an Americanization of the French family, Pineau) was born in Oklahoma but grew up in the Bay area of California. Her family moved to San Francisco to take advantage of shipbuilding jobs during WWII. She remembers roller skating down the steep Bay area hills, catching herself on telephone poles at the bottom. Betty spent her school years in Berkeley, near the UC campus where she’d wind up attending college.
The courtship between Win and Betty was quick. After meeting, they spent most of their time together, including dinners with Betty’s mother who had moved to El Sobrante north of Berkeley, near the San Rafael Bridge. In December of the same year, Win proposed. He didn’t have a ring, so he tied a red ribbon around her ring finger.

A marriage, A New York honeymoon, a summer in Nyack

The Perrys married on June 14, 1958 in Berkeley. Win’s parents gave them a choice of wedding presents: Either they would come to the wedding in California or the kids could have a car. Ever practical, they chose the car. Of course, the car was in Nyack. They flew east, honeymooned in a little blue trailer in Montauk, and then lived with Win’s great-uncle Charlie at 319 N. Broadway in Upper Nyack. Little did they know then, it would become their house of nearly 60 years.
Betty and Win were a team. They worked together for their room and board during the summer of 1958 by painting great-uncle Charlie’s house. They also built a patio shelter for a pool at the house just south of the elementary school. It wasn’t all work, however. They took a sailing trip up the Hudson and it took them two days to reach West Point. It was extremely hot and still on the river. Betty wasn’t thrilled about sailing,  even more so on the return trip when a big storm drove them downriver so quickly that they arrived in Nyack in two hours.

The Perrys head back to Berkeley

The newlyweds drove back to Berkley via Florida, New Orleans, Oklahoma, Colorado, and Yellowstone National Park. All this in a week, camping as they went, and replacing the universal joint in the car that burnt out climbing Pike’s Peak. They rented an apartment in Berkeley near campus. Soon, they found a new cottage garden apartment that allowed children. Susie, their first child, was born the day after Betty’s last final of the year.
Graduation brought big decisions. Where to live? They both loved Berkeley. It was home for Betty. Win loved the intellectual life in Berkeley, where he listened to talks by Frank Lloyd Wright and Buckminster Fuller. “He loved the geodesic domes,” said Betty. Berkeley was quiet and diverse, with many natural attractions. But Berkeley was already crowded with architects, and Win had roots in Nyack–he was the seventh-generation Perry in Nyack, after all. So, they decided to head back east. 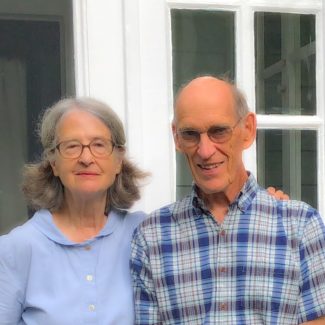 The Perrys make Nyack their home

For Betty, Nyack was a little small, but could also feel like a little piece of Berkeley. Nyack was on a hillside, the Hudson River replaced the San Francisco Bay, and instead of water sunsets, they watched water sunrises. From the very beginning, Nyack history thrilled her. She speaks with reverence of the house that Edward Hopper used as a model for his painting, Seven A.M., which can be seen from their front porch. Nyack was also diverse, and had a liberal element common to Berkeley. “If the problems of the world are ever going to be solved, the solution will start in Nyack,” Win said.
Friendships developed quickly, along with a growing family. They enjoyed the company of more people than they can count–people like the Wexlers and Theriens across the street, and the Haders, children’s book authors and illustrators in Grandview and former Bay Area Californians. 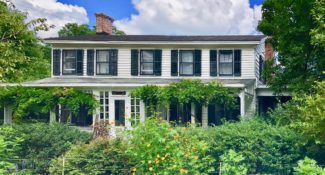 Betty didn’t work outside the home until their four children were all in school, though she helped to create a free nursery school and then the Nyack Headstart program, as well as being a strong friend of the Nyack Library.  After working 10 years in Nyack Schools, she started a 20-year career as a school librarian in Tuckahoe.
Win commuted to the city for two years, carpooling to the Tarrytown train station. When Win started working in Nyack, he bicycled to work. The Perrys quickly became a familiar part of the Nyack scene. Their contributions to the community are almost too numerous to mention. They were instrumental in the founding of the Historical Society of the Nyacks, in the renovation of the Edward Hopper House, the founding of Head Start in Nyack, the rehabilitation of the John Green house, and so much more.
Asked about the keys to longevity in marriage, they mention good luck, wonderful children, being patient with each other during disagreements, and minimizing financial worries by living within one’s means. You can find Win in a bucket hat working in his front yard, or Betty volunteering in the Nyack Library Local History Room. More likely than not, you will find them together. Their love of Nyack’s interesting people and history is as complete as their marriage.

1890 photograph of horse and driver delivering firewood in Upper Nyack with 319 N. Broadway in the background. Note the electric street light and the small, roofed well house in the center just to the left of the driver. This is not the Perrys’ well house; rather, it is the well house for a home on the left that is not visible in the photo.

The Perrys’ white frame house has gone through many changes since it was first built before the Civil War, a time when the Upper Nyack town center was still about the size of the Nyack town center. The original house sat on the corner of N. Broadway and Van Houten Street, and was much smaller. The front door and windows to the south of the door are in the original house, which had a lower second story. Abram Pitt, a boot-maker, built the house. His son built a carpenter shop in the back yard that still stands. At some point, the house was expanded; the roof was raised to match a new addition on the north side. The addition was a part of another house moved to the site. Moving all or parts of houses was a common practice in Nyack dating back to the 1950s.
One interesting feature of the Perrys’ house is that the original well house remains, straddling the property (the neighboring house shared the well). In 1920, a breezy side porch was added on the south side. The yard is small but full of interesting details and has been modified as the Perry family grew and changed over time. Two hammocks hang from cedar trees planted by great-uncle Charlie. In summer, it is a quiet, shady spot for the Perrys to talk over the day and make plans.

Michael Hays is a 30-year resident of the Nyacks. Hays grew up the son of a professor and nurse in Champaign, Illinois. He has recently retired from a long career in educational publishing with Prentice-Hall and McGraw-Hill. He is an avid cyclist, amateur historian and photographer, gardener, and dog walker. Hays has enjoyed more years than he cares to count with his beautiful companion, Bernie Richey. You can follow him on Instagram as UpperNyackMike.

Nyack People & Places, a weekly series that features photos and profiles of citizens and scenes near Nyack, NY, is brought to you by HRHCare and  Weld Realty.
In this article:haders, head start, John Green House, miriam wesley, Nyack, Nyack History, Nyack Library, The Historical Society of the Nyacks, Win and Betty Perry