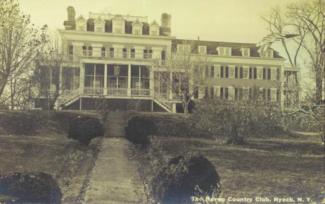 Early photo of the Haven Country Club taken from Franklin Street.  The estate house is on the left and the wing added is clearly shown on the right side. Today, houses line the front yard.

The Estate that eventually became the Haven Country Club 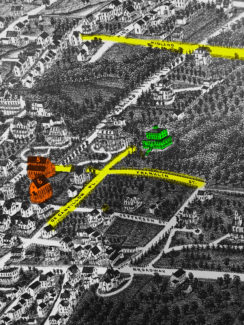 In the early 1850s, Richard De Cantillon built an impressive mansion on a large piece of property facing Franklin Street between what is now Haven Court and Fifth Avenue.  De Cantillon’s property ran all the way up to Oak Hill cemetery, including what is now BOCES school (the former Nyack High School) and most of the Nyack Hospital block. The Burleigh lithographic map of 1884 shows a small forest around the house with fruit trees on the upslope.
Although Richard De Cantillon must have been a relatively rich mover-and-shaker at the time, little is known about him. He was a trustee for Rockland College, a finishing school for women that was located in a large building near De Cantillon’s property north of Highland Avenue. De Cantillon died in 1888 at the age of 75. 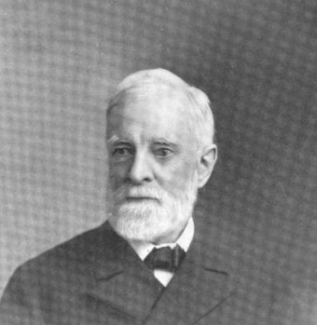 William Alexander Smith purchased the De Cantillon mansion. Smith was a Wall Street banker, stock broker, and one of the founders of the New York Stock Exchange where he served as president in 1868.
The De Cantillon estate, named “West Hill” by the Smiths, became the family’s summer home, and it buzzed with many teas, card parties, and church events. The Smith estate was a good topic for the local newspaper. In 1898, a silver watch was found buried some three feet deep on the property. No one knew how it got there. Another man reported seeing a ghost as he walked along Franklin Ave. in front of the house.
Smith died in 1911. He was the oldest living member of the NYSE. Many prominent financiers came up from the city in a special train car for the funeral, and a long line of carriages carried Smith’s friends to the summit of Oak Hill Cemetery for the internment. Bishop Greer of the New York diocese spoke at graveside services.

The short happy life of the Haven Country Club 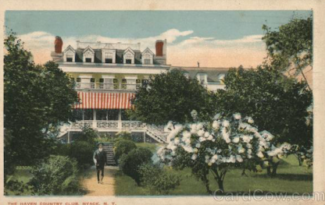 Postcard of the Haven Country Club. Interestingly, a man is walking down the sidewalk.

After Smith’s death the former De Cantillon property was carved into pieces. The house and four acres were purchased for the Haven Country Club. The Haven Country Club’s management, advisory board, and staff were all women. President Miss Anna C. Maxwell, the founder of the Presbyterian School of Nursing in New York City, led the organization. And what exactly went on at the club? It was advertised as an affordable, attractive place for self-supporting, professional women’s rest and recreation. The club was filled with nurses, teachers, social workers, students, and others. Only working women could become members, others could become associates.
The house had large rooms, wide sunny verandas, and ample grounds for gardening and walking. The New York State Charities Aid Association had only good things to say about the club. Annual memberships were $1. Single rooms were between $10 and $12.50 a week. Special arrangements could be made for a room with a private bath and open fire for $25 per week. Anyone convalescing from an illness had to submit a physician’s guarantee that the member was ambulatory and did not have an infectious disease.

The Haven Country Club becomes a school, then residences

After 10 years, the Haven Country Club was no more. In 1923, Mrs. Helen Harley Jenkins of New York City foreclosed the mortgage and obtained title to the premises. She added a large north wing onto the original house making it a dwelling with 43 bedrooms, 13 bathrooms, large reception rooms, and offices. In 1924, Miss Ryer’s Country School moved to the property. The newly named Haven School was for both boarding and day pupils; its focus was preparation for entry into secondary school. The teaching methods were advertised as progressive without being extreme, emphasizing health through right living and special attention to diet.
The school became defunct by the beginning of the Depression in 1929, and the property was purchased by Alan Legget, Inc., a large New York City developer. The building was converted into an apartment building and the rest of the property was divided into lots for sale. The house itself no longer exists but the probable location is now a three-story brick apartment building with seasonal views of the Hudson River. The high school that opened in 1928 attempted several times to buy the back of the property, finally winning enough votes to do so. A new addition to the school sits on part of this parcel.
The Haven Country Club
The short life of the Haven Country Club is a story of change in the village, from the time of landed estates, to use for institutions, to smaller individual residences and apartments that still exist in the village today. The Haven Country Club, a club for women, owned and run by women at a time when women weren’t allowed to vote, was a local signpost for how women had to “earn” their rights at the time.
Photos courtesy of the Nyack Library. Colorized litho by Mike Hays.

Michael Hays is a 30-year resident of the Nyacks. Hays grew up the son of a professor and nurse in Champaign, Illinois. He has recently retired from a long career in educational publishing with Prentice-Hall and McGraw-Hill. He is an avid cyclist, amateur historian and photographer, gardener, and dog walker. Hays has enjoyed more years than he cares to count with his beautiful companion, Bernie Richey. You can follow him on Instagram as UpperNyackMike.