Bruce Tucker is bubbling over with a green kind of Piermont Pride. In what’s got to be record time, the mayor of Nyack’s neighbor-on-Hudson created, talked up, tweaked, got through the Village Board (unanimously), and last week signed a ban on single-use plastic bags and styrofoam containers that has residents and businesses smiling. Tucker took office last January, and in a mere eight months made his village the first Rockland County jurisdiction to pass a law to “ban the bag.”

New York City passed a similar law in 2016, but it was quickly overturned by Governor Andrew Cuomo and the Albany legislature—including a “no” vote from Nyack’s reliably-green Assemblymember Ellen Jaffee (D-97)—on grounds that a better, statewide law should be crafted instead. Cuomo appointed a committee to study the matter, which came back with a report last January damning the single-use plastic bag as “a detriment to the health of communities and the environment alike” and calling for a fix ASAP.

The governor’s own Earth Day 2018 bag ban proposal was brushed aside by environmental supporters in the legislature who came up with their own, more comprehensive bag ban bill. It passed the Assembly, but the senate version (along with lots of other legislation) got bogged down in a cutthroat partisan deadlock that only ended with the June end to the senate session. 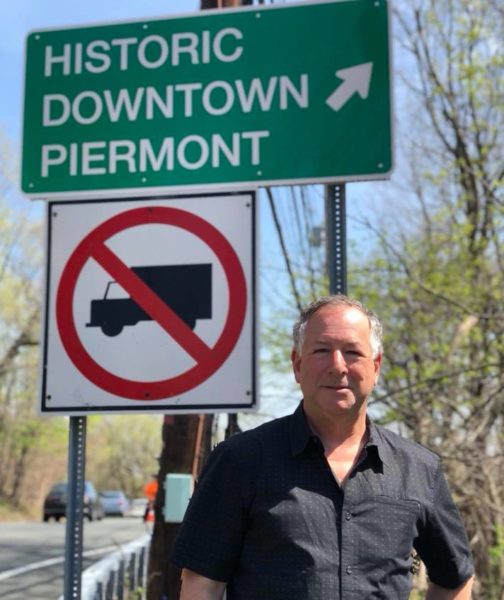 Although NYC has “home rule” restrictions that left it vulnerable to an Albany slapdown (and left Mayor Bill de Blasio fuming), other jurisdictions are free to make their own rules on matters like single-use plastics. Piermont joined about a dozen New York villages and towns, like New Castle, New Paltz Hastings-on-Hudson, and Suffolk County in establishing bag bans tailored to their own communities. In fact, at his open meeting last week, Mayor Don Hammond mentioned that the Village of Nyack will be studying a single-use plastic bag ban in the coming months.

EM: When did you start working on this single-use plastic bag and styrofoam container initiative? And what sparked you to do it?

Bruce Tucker: Talks started at the beginning of last year, as we looked for tasks to complete in order to move toward classification as a Climate Smart Community (CSC). This idea came up, but we discovered that the state does not give CSC “points” for a single-use plastic bag or styrofoam takeout container ban—which I find difficult to understand. But we decided to go for it anyway.

We were aware of the bills in the state senate and assembly. In fact, we met with both State Senator David Carlucci [D-38] and Assemblymember Ellen Jaffee, and both said that the state bill had little chance of passing until next year at the earliest. So we said “Nah” and decided to act on our own version.

The good thing about being a small village is that you can really get things done and implemented fairly quickly. And we were also able to get the word out with meetings and social media. 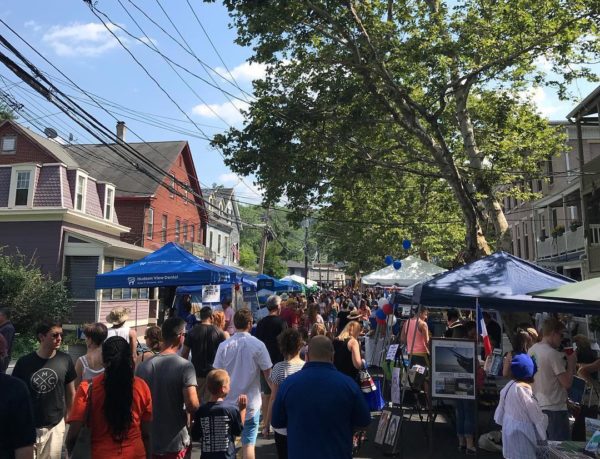 Enjoying Bastille Day 2018 on Piermont Avenue. Residents were not only pleased with their single-use plastic bag ban, but used social media and public meetings to congratulate their mayor and trustees for making it happen. Photo courtesy Piermont Chamber of Commerce via Facebook

What kind of work did you have to do to get this bill to a vote?

From the beginning, we knew that all the trustees were going to support it. Trustee Ivanya Alpert worked hand in hand with me on this, and was the liaison to the Chamber of Commerce.

We held a public hearing to allow residents and business owners to air their concerns and make comments. Of the residents who showed up, three spoke, all praising the board for taking this action. I really felt that the will of the people was behind us. We were seeing things on social media, residents thanking and congratulating us.

How did local businesses react to the proposed ban? Were you ever worried about getting them on board?

We worked with our Chamber of Commerce, and did go back and forth on some items, like the 10 cent fee for a substitute paper bag. There was some pushback on that, so we dropped the fee and said that businesses can give out recyclable paper bags to customers who’ve forgotten their reusable bags.

But I knew that we had good support among our businesses. In fact, two new ones just opened—DVine Pizza and the reopened Community Market—that both came in green from the start, with recycled cartons and no styrofoam or single-use plastic bags.

Where we thought we’d get the most resistance was in that little strip mall on 9w, where there’s a sushi place and a mini mart. l went and spoke to both, and they were totally on board with the idea, so I felt very positive that we’d get something passed.

Once a keystone of Piermont’s “Main Street” (Piermont Avenue) Scene, the recently re-opened Community Market came back with a new eco-attitude, before Piermont’s bag-ban: no single-use plastics and no styrofoam. Photo: David Cousino via Facebook/Piermont Happenings

We looked around at different towns and villages, but ended up modeling our law on the one passed by New Paltz, which has the same kind of village “feel” as both Piermont and Nyack.

The “Reusable Bag Law” just adopted by the Piermont Village Board bans the distribution of single use plastic bags and Styrofoam containers by any Piermont retailer or restaurant. They may continue to distribute recyclable paper bags. Thin “produce/meat” bags, garment bags, and “dog waste” bags are exempt from the law.

First-time warnings will be issued to violators, followed by fines of $150 per day for continued violations. The Law goes into effect January 1, 2019. This is to give retailers time to move out any bag inventories they may have.

In Piermont, we say that everyone else is talking about climate change, but Piermont is living it. We’ve already received a warning that tomorrow’s high tide might flood some of the houses in the Bogertown area near the pier. We want to take any steps we can to fight both climate change and environmental damage.

Plastic bags and styrofoam packaging that get discarded end up polluting our waterways, clogging our storm drains, endangering marine life, and causing unsightly litter. These bags last hundreds of years in landfills and are a potential source of harmful chemicals. They don’t biodegrade, but instead break down into smaller pieces that are ingested by marine animals and make their way into the food chain.

The Lamont-Doherty Earth Observatory (LDEO), which has a building on the end of our pier, is constantly studying the effect of plastic waste on sea creatures. We’re proud of our continuing involvement with their scientists.

Rain and high tides this week caused street flooding in Piermont. “People talk about climate change; Piermont has to deal with it,” said Mayor Bruce Tucker. Photo: Village of Piermont via Facebook

What will happen to Piermont’s law if New York State finally enacts a single-use plastic ban?

If the state law requires a 10 cent replacement bag fee, we’d have to check with our village attorney, but would probably have to follow that.

But we’d welcome a statewide bag-ban, even if it does supersede ours. New York State should have a total single-use plastic bag ban, just like California. And a big part of the reason why we as a village did this was to encourage other municipalities in Rockland County to follow suit.

It’s right there near the supermarket door and it takes all sorts of plastic bags, wrappers and film. A paltry 14%
of all single-use plastic bags and film actually gets recycled. Photo: Susan Hellauer

In this article:ban the bag, Maria Luisa Boutique, Say no to the bag, Strawtown Studio, sustainable saturday